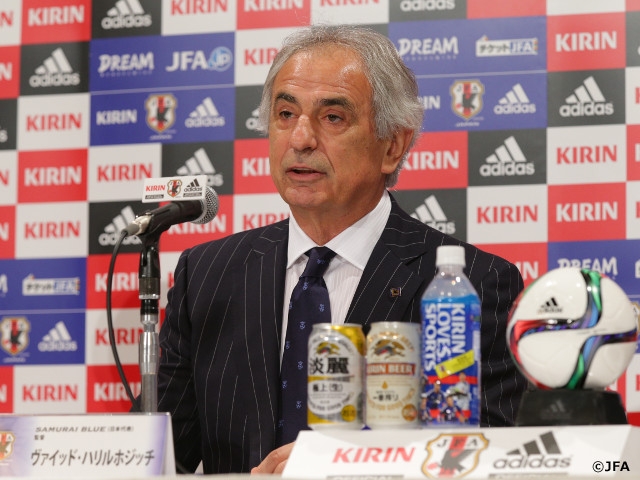 The head coach of SAMURAI BLUE (Japan National Team), Vahid Halilhodzic, announced the squad on Monday 1 June for the match against Iraq at the KIRIN CHALLENGE CUP 2015 (on 11 June in Yokohama) and the game against Singapore in the 2018 FIFA World Cup Asian Qualifiers Round 2 (on 16 June in Saitama). He commented: "our objective is to continue winning."

The squad consists of 25 players, including midfielder TANIGUCHI Shogo (Kawasaki Frontale) and defender NIWA Daiki (Gamba Osaka), both of whom joined the short training camp for the first time in April, as well as HARAGUCHI Genki (Hertha BSC Berlin in Germany), who was selected for the first time in two years.

The forward USAMI Takashi (Gamba Osaka), who is currently the top scorer in the J.League, and defender NAGATOMO Yuto (FC Internazionale Milano), who could not play two consecutive matches in March due to injury, were selected along with midfielder KAGAWA Shinji (Borussia Dortmund), forward OKAZAKI Shinji (1.FSV Mainz) and forward HONDA Keisuke (AC Milan).

Vahid HALILHODZIC, head coach, noted: "high-level matches are coming in the qualifying round of the World Cup. We’d like to get ourselves ready as much as possible."

The players, who have just returned to Japan after the end of the season in Europe, started the training session on 1 June in Chiba. The J. League players will join the team on 8 June after finishing games with their respective club teams.

The head coach commented: "this training camp is a little tricky, as the way the players ended the season differs from country to country. I’d like to divide them into groups to see their physical and mental fatigue before the players from Japan join the camp at the end."

Under the instruction of Vahid Halilhodzic, the match against Singapore will be the first official game after the first two victories against Tunisia and Uzbekistan in March.

Vahid Halilhodzic also noted: "I want to create a winning culture. The first game of the qualifying round of the World Cup is vital, and we’d like to show our ambition to play in the World Cup."

Japan is in Group E with Singapore, Cambodia, Afghanistan and Syria, against whom the team will play both home and away. The coming qualifying round will be combined with the one for the 2019 AFC Asian Cup. 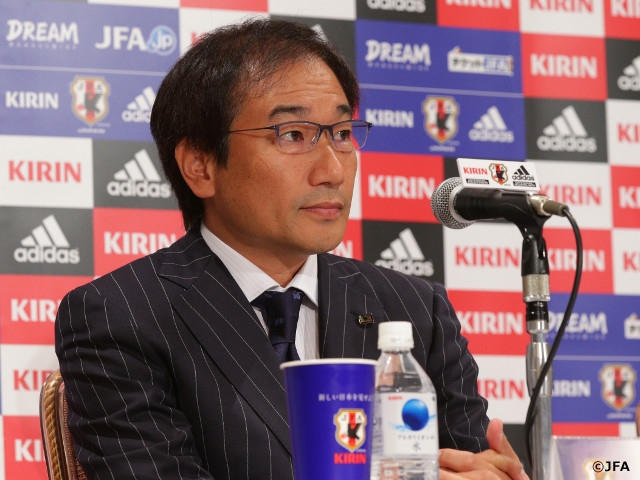 Vahid Halilhodzic, Head Coach of SAMURAI BLUE (Japan National Team)
The high-level matches are coming in the qualifying round of the World Cup. As the players finished the leagues in a different way in their respective countries, it’s a little difficult to adjust their conditions. I’d like to see their physical and mental fatigue, so that we can get ourselves ready before the matches. Our objective is to continue winning and I want to create a winning culture, which I believe is of utmost importance. We need a strong spirit and tactics to win away games. Although we need to choose the tactics depending on the opponent or the circumstance, the opening match of the qualifying round is essential and I’d like to show our ambition to play in the World Cup. I’d like to improve our level and go to Russia.