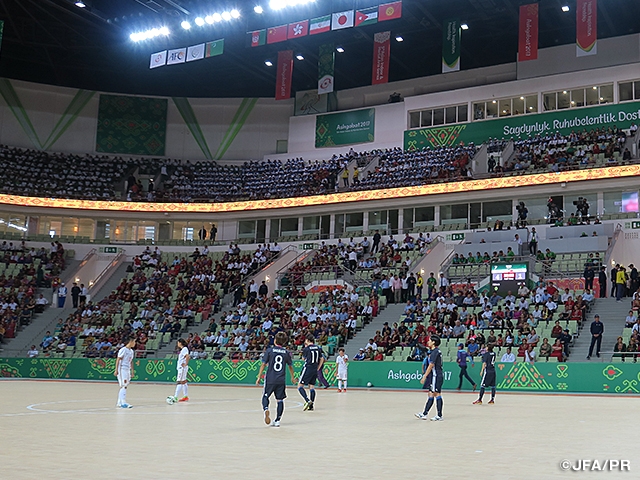 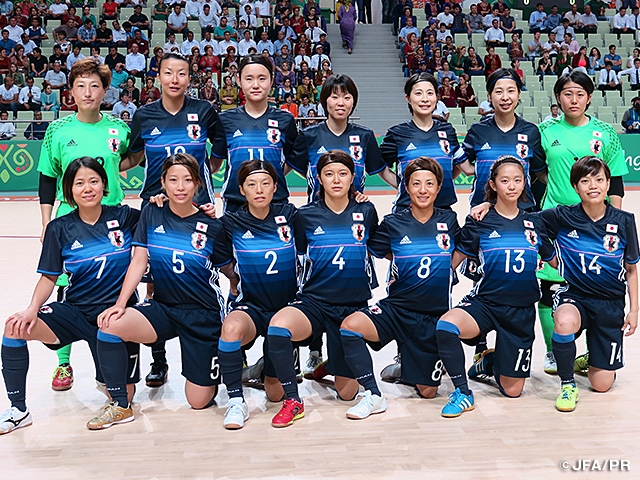 Marking the fifth edition of the Asian Indoor and Martial Arts Games in 2017, both the men’s and women’s futsal tournaments kicked off on the opening day on Saturday, 16 September. After a draw that was revamped following a withdrawal of two national teams just before the competition, Japan Women's Futsal National Team played the opening game of the entire competition and got off to an excellent start by winning the match.

Japanese coach ITO Masanori stated prior to the game, ‘Our goal is to win the tournament. We only have five matches even if we make it to the final. Let’s enjoy every one of them and aim for the summit. We also must be reminded of those players who could put on the national-team uniforms. We are here to continue the legacy of our past predecessors who clinched the title for the third straight tournaments. Now it is our turn to compete for the fourth consecutive title.’

A huge crowd gathered to watch the opening match of the Asian Indoor and Martial Arts Games between Japan and China PR at Multifunctional Sport Venue. The Japanese squad kicked off with the ball and, despite showing signs of nervousness, still managed to move the ball well. SAKURADA Miku scored the opening goal in less than one minute into the game. Thereafter, the match stayed in the balance as China took advantage of their physicality and attacked with fluidity and pace, but Japan kept the opponents checked at all times and did not allow them to attempt a shot at goal. In the 12 minute, FUJITA Mio doubled the advantage with her first goal of the Asian campaign. China showed some resilience one minute later as they capitalised on a defensive mishandling and slotted their first goal into the net. Now trailing only by a single goal, Chinese women came out strongly and looked for an equaliser, but Japan halted their menacing attacks and reclaimed the two-goal lead moments later when Fujita fired home the third and TAKAO Akari added the fourth three minutes later to take a 4-1 lead at halftime.

China struck first in the second half, but Japan soon restored a three-goal advantage, as captain HOTTA Eriko stunned the Chinese goalkeeper when she fired in a dazzling shot into the net. Thereafter, China deployed a power play replacing their goalkeeper with a fifth field player. However the Japanese team aided with some solid defensive efforts from their goalkeeper YAMAMOTO Ayaka did not allow their opponents to score before the final whistle and grabbed a 5-2 win in their opening match of the tournament. Japan futsal squad will face Hong Kong in their second match of the first round on Sunday 17.

On the side note, the nation team received words of encouragement this afternoon from the visiting guests for the Asian Indoor and Martial Arts Games led by ENDO Toshiaki, Secretary General of the Diet Members' League for the Promotion of the Tokyo 2020 Olympic and Paralympic Games, and braced themselves as they realised that they are representing Japan in the tournament. 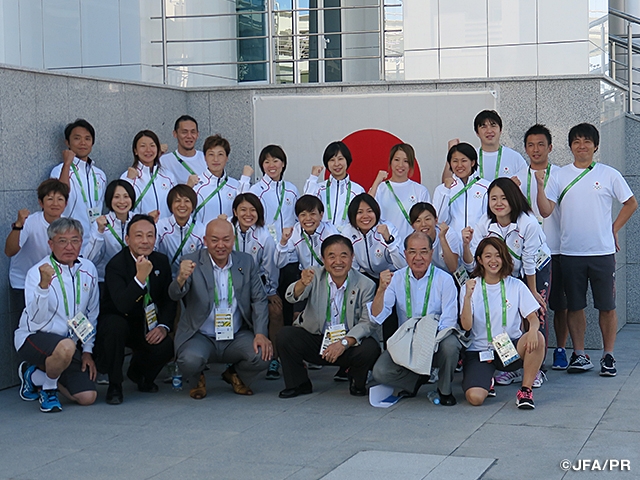 ITO Masanori, Coach (Japan Women's Futsal National Team)
There was a huge crowd as we played the opening match of the competition. I believe that most of our players never experienced playing in front of such a crowd before. We decided to play it simple in order to bring our best performance in our first game for the tournament as well. The opening match is difficult in every competition. We certainly felt the rapid improvements in the level of play in Asia when we fought against China today. In such conditions, I have to praise my players for keeping the lead for the entire match. I believe that the primary reason why we were able to do so was that we did not shy away from the challenges on the ball. Many say that Japanese players are inferior when it comes to physicality. However, we are not shying away from any physical contact, while we will look for other ways to make up for the difference in the physical strengths. I have kept those elements in mind in training. Additionally, I believe I can attribute our win today to our continued efforts in strengthening the team. However, the important match against Hong Kong will come up next. We will do our best to win the match and get through the first round of the tournament.

GK #12 YAMAMOTO Ayaka (SWH Ladies Futsal Club)
I am simply glad that we secured a win over China PR in the tournament opener. We enjoyed playing in front of a huge crowd that we seldom see it in domestic games and experiencing a unique atmosphere of an international competition. We made some mistakes and gave up few goals. But looking at the positive side, we have been working on set-piece and power-play defence in training, and did well today to defend against them as well. We will work hard to further improve our level of performance and win the next match.

FP #8 SAKURADA Miku (Leograsta)
In regards to the goal I scored, we were able to rob the ball deep inside the opposing half and quickly hit on a counter to score the goal. I did not hesitate to strike it as hard as possible with my left foot, when I netted the memorable first goal of the entire competition. Both my team and I got into the game smoothly by defending solidly, and controlled the match from the beginning of the match. However, there were few times when the opponents took advantage of the open space immediately after our attacking plays. We need to work on them as well as our set-piece defence. We must proactively talk to each other as we aim for the title. I am willing to discuss what I realised with my teammates, and hope that it will brighten up the mood inside the team as well. Despite the time difference, we have received many encouraging messages. We will give our best and try to return the favor by winning the match tomorrow as well. Please send us your continued support for our team.

FP #13 TAKAO Akari (Maruoka Ruck)
We secured a win in the important opening match of the tournament against China. The stadium with a capacity of approximately 10, 000 people was filled to overflowing. It was exciting to play in front of such a huge crowd. We were also encouraged by the Japanese supporters who came to cheer us and waive the flag of our country as well. In the match today, I was able to score a goal for the team. I did not control the ball well and had to fire from a tight angle, but I was really determined to netting one home and fully stretched my leg to take a shot. I cherished the moment when I hugged and shared the joy with my teammates after I scored a goal. There are four matches we need to win before we clinch the title. We will take one game at a time and secure a win in each of them. We will first focus on tomorrow’s match against Hong Kong and make the best possible preparations to grab a win.