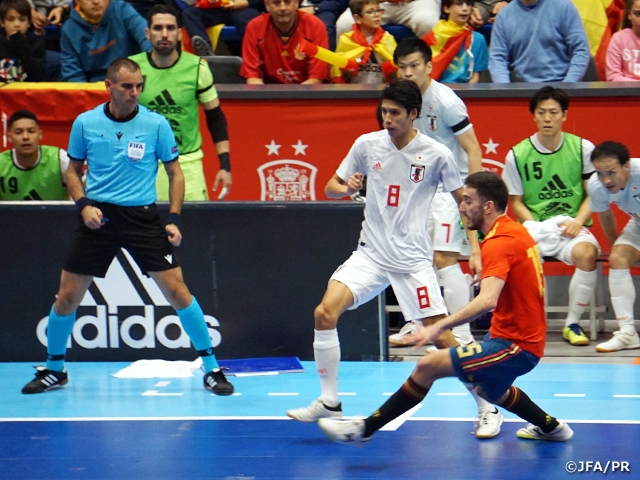 In a match against the European powerhouse, coach Bruno GARCIA named SEKIGUCHI Yushi, ANDO Ryohei, HIRATA Neto Antonio Massanori, KATO Minami, and NISHITANI Ryosuke in his starting line-up. With YOSHIKAWA Tomoki attending the AFC Annual Awards on this day, Nishitani was named as the team captain. Also, the team wore a mourning band in memory of their team doctor, Dr. IMAI Sosuke, who passed away in a recent accident in Japan. 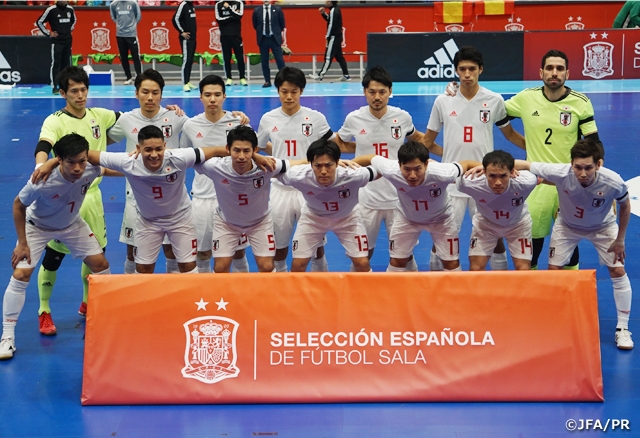 The match started with Japan showing great aggression, as Kato struck the first shot in the first minute of the match, followed by another attempt made by Ando in the second minute, but both shots were saved by the opposing goalkeeper. Spain responded in the third minute by creating a one-on-one situation against the Japanese goalkeeper, but Sekiguchi made the save to deny this opportunity. Sekiguchi made another fine save in the seventh minute, when a Spanish player struck a powerful shot from distance. With Japan committing their sixth foul, Spain earned a spot kick from the second penalty spot in the 15th minute. Although the home side failed to convert this opportunity, they were rewarded with another penalty kick at the end of the first half, which they successfully converted to take a 1-0 lead at halftime.

During halftime, coach Garcia gave a pep talk to his players, “We are here to win. We will continue on the positive plays we showcased in the first half, while making necessary adjustments to fix the issues.” The Japanese players responded to their coach’s words and showed great aggression to start the second half. After Kato struck a shot in the 21st minute, MINAMOTO Akira responded to a pass from MORIMURA Takashi to fire a shot in the 23rd minute, but his attempt was blocked by a fine save made by the Spanish goalkeeper. In the 25th minute, Japan saw TAMURA Yuki faced the goalkeeper one-on-one, but once again had their chance denied by the opposing goalkeeper. With the home side gaining more momentum through their defence, the second goal was scored in the 32nd minute, when a Spanish player struck a header to double their lead. Trailing by two goals, Japan initiated their powerplay to cut down the deficit, but conversely conceded a goal from a counterattack, finishing the match 0-3. 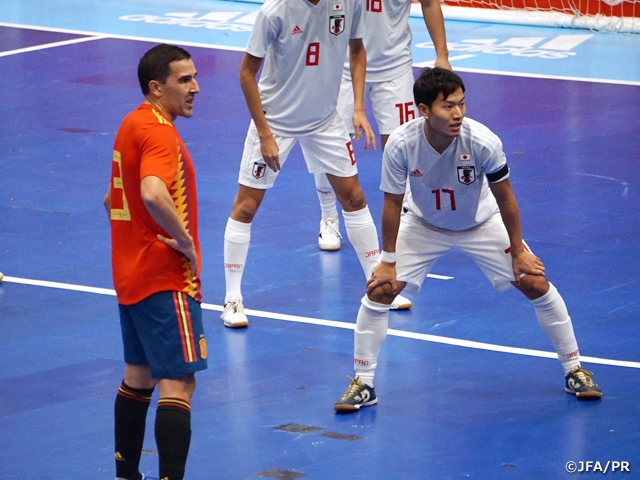 GK #2 PIRES Higor (Pescadola Machida)
Unfortunately, we lost the first match. Although we managed to play a good game in the first half, we couldn’t find our rhythm and allowed our opponent to take control of the ball possession in the second half. We conceded the second goal from a corner kick and the third goal from a counterattack against our powerplay. When facing strong opponents, the small details tends to define the match, and we lacked quality in those details today. We must address the mistakes we made today and strive to win the match tomorrow.

FP #9 HIRATA Neto Antonio Massanori (AD Fundao)
It is unfortunate that we lost the match today. We must make the necessary adjustments ahead of tomorrow’s match. We will rest up and give our best efforts to win the second match.

FP #14 NISHITANI Ryosuke (Nagoya Oceans)
We lost our match against the Spain Futsal National Team 0-3. Although we managed to showcase our strengths to threaten the opposing goal, we were caught off guards to concede the goals. We are here to win matches, so we will make the necessary adjustments ahead of tomorrow and try to showcase a better performance in our next match.

FP #16 TAMURA Yuki (Shriker Osaka)
First of all, I would like to share my gratitude for this opportunity to play against a strong team at this wonderful facility. Through this match, we were able to see what we lacked as a team, so we hope to make the adjustments in our next match and return to Japan on a high note.