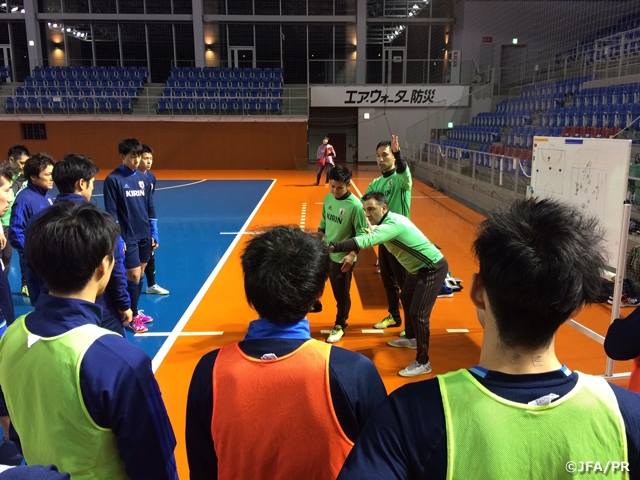 Right after the announcement of the new coach in October, the team held their first training camp. Two months have passed since then, and the newcomers, TAMURA Kasho, HORIGOME Shota and HARA Shinsuke, joined the camp this time. Furthermore, the core players of the coach Miguel RODORIGO era, TAKITA Manabu, MORIOKA Kaoru and WATANABE Tomoaki, were enlisted to the newly-formed squad for the first time. A total of 19 members were called-up in Nagoya.

“We will keep working on things from the previous camp, while developing them further. We will focus on offence in this camp.” As coach commented, today they practised different offensive patterns using standard formations. Also, they worked on initiating offence after clearing the ball. The players went through various attacking schemes thoroughly in training this day. 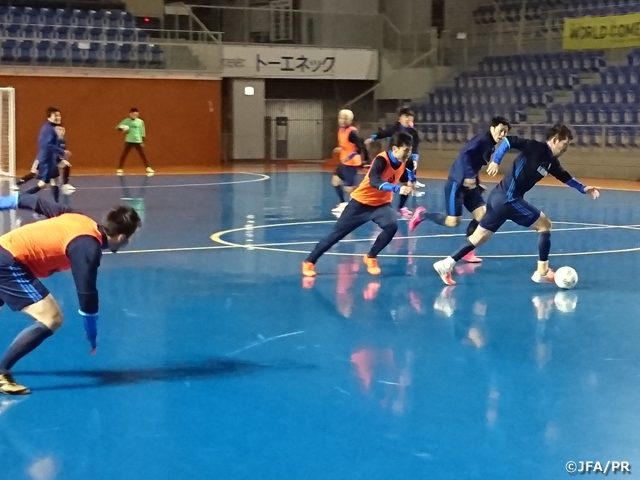 Using the white board, the coach gave detailed instructions during training. The players initially looked confused, but as they got used to the practice, they started to work out more smoothly, meeting the expectation of the coach.

At the end of the practice session, they played four-a-side intrasquad scrimmages on a half-sized court. Seeing many plays with strong physical contact from the beginning of the training, the team had an intense but fruitful first day of the camp.

The team will be holding this training camp until Wednesday 14 December.

Bruno GARCIA, Coach
In the first camp (held in October), we focused on developing the basis of our futsal—tactics on defence and outnumbered situations. Towards the end, we did touch on offence, and in this camp, we decided to develop them further by focusing our efforts on attacking schemes and techniques. Set plays are one of our primary themes. Through a series of training camps (including the one to be held next week), we would like build the common basis, or the team concept, by working on offensive and defensive tactics and set plays.

TAKITA Manabu (PESCADOLA MACHIDA)
It was an intense yet fruitful first day of training. I still need time to get used to certain aspects of training, but the demands (by the coach) are clear, and the specific role (of each player) is easy to comprehend. I am going through each practice, while taking communication proactively. We only have a limited time to work together as a national squad. By working hard every day, I want to improve myself and the team as a whole.

HOSHI Ryuta (NAGOYA OCEANS)
Under the new coach, this is our second training camp. There is a good atmosphere in the team. From understanding offensive patterns, defensive schemes and ways to avoid pressure, I want to work out more smoothly during training. I will practice hard in the remaining three days of training and make this camp a meaningful one.

HORIGOME Shota (ESPOLADA HOKKAIDO)
This is my first call-up to the national team, I felt nervous at the beginning. Furthermore, I wasn’t used to the 3-1 system and I had a difficult time adjusting to it. I learned a lot today, and this is becoming a very fruitful training camp from the first day. By proactively talking to my coach and teammates, I want to improve my understanding of tactics in futsal. I will practise more aggressively and get the most out of it. 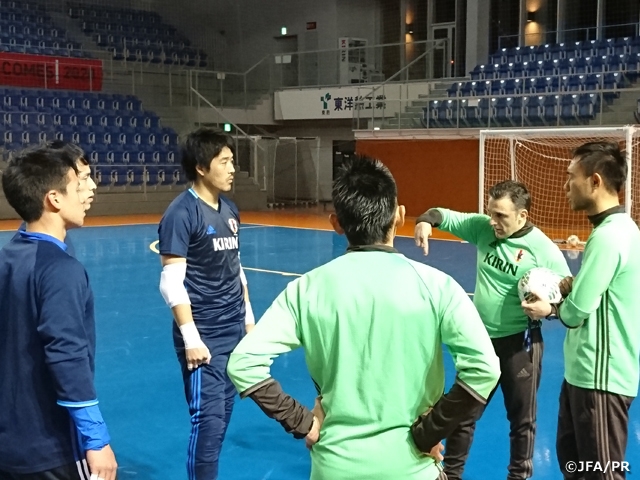