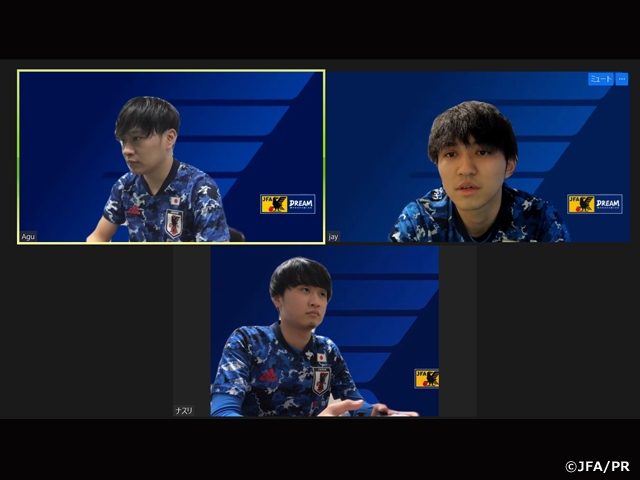 In light of the Covid-19 pandemic, the health of the Japan eNational Team players was considered a top priority, as Jay (Kawasaki Frontale) and Web Nasri (Kashima Antlers) participated from their homes, while Agu (Blue United eFC) participated from a facility in Tokyo.

With the Play-Ins being played in a two legged round-robin format each week, Japan got off to a hot start by taking a 2-0 lead in the first half against Australia, who scored 18 goals in Week 1, and despite conceding two goals at the end, managed to win the first-leg 3-2.

In contrast to the first-leg, Japan found themselves trailing 0-2 in the early going of the second-leg but managed to cut the deficit in half with a superb combination play displayed in the 30th minute, which was followed by an own goal given up by Australia that equalised the match. However, Australia had the last laugh when they scored the game-winner during additional time of the second half to walk away with a 3-4 victory.

In the first-leg against Singapore, Japan led the match 1-0 at halftime before they conceded the equaliser in the 76th minute. However, Japan retook the lead soon after to claim a 2-1 victory.

“The fact that we have lost the second-leg after winning the first-leg in back to back ties is something we need to address,” said Agu, after the team finished the first day with two wins and two losses. Nasri also commented, “We need to raise the quality of our combinations in both offence and defence.” Jay, who observed the matches as a coach, shared his aspiration ahead of the second day, “We need to do a better job in possessing the ball after winning the ball tomorrow.”

On the second day, Japan faced two opponents they have faced in Week 1. Japan rotated their line-up from Agu/Nasri to Jay/Nasri in their first-leg against Indonesia but ended up losing the match 0-1 after they conceded the decisive goal in the early minutes of the match.

Switching back to Agu/Nasri in the second-leg, Japan showcased a persistent effort to keep the match scoreless into the second half, before breaking the deadlock in the 73rd minute, which turned out to be the game-winner to give Japan three points.

With their relegation to Division 2 on the line, Japan faced India, who scored six goals against Japan in Week 1. Despite the early aggression showcased by Japan, it was India who scored the opener, but Japan managed to equalise with an own goal conceded by India just before the break. After both sides failed to convert their chances in the second half, the match ended 1-1, giving both sides one point apiece.

For the first time in Week 2, it was Agu/Jay who started for Japan in the second-leg against India. After conceding the first goal to India in the first half, Japan levelled the match in the 67th minute, but conceded back to back goals in the late minutes to lose the match 1-3.

As a result, the Japan eNational Team finished Week 2 with a record of three wins, one draw, and four losses, putting themselves in fourth place, which means that they will be competing in Division 2 next week.

Jay (Kawasaki Frontale)
I lost both matches I played during this week, so I felt inadequate. The system we used in our match against India was a formation I am used to playing 1on1, but didn’t have much experience playing 2on2, so it was a bit of a gamble. We need to do a better job staying on the same page in both offence and defence.

Web Nasri (Kashima Antlers)
We were aware of the match results from day one, and the fact that we were in a must win situation really added pressure, which made it difficult for me to display my usual performance. We can still advance to the play-off if we can finish Week 4 in first place, so we will do our best to return to Division 1 in Week 3.

Agu (Blue United eFC)
It was difficult to cope with the tight schedule with the national team, club, and individual matches. We have our own individual style of playing 1on1, so it is not easy to integrate them. We still have long ways to go in terms of the quality of coordination between the three players, so that is an aspect we must improve ahead of our next match week. In order to reach the play-off, we must win out of Division 2, return to Division 1, and finish first in Week 4, and I feel that the shortest way to achieve this is to find our own style of football.