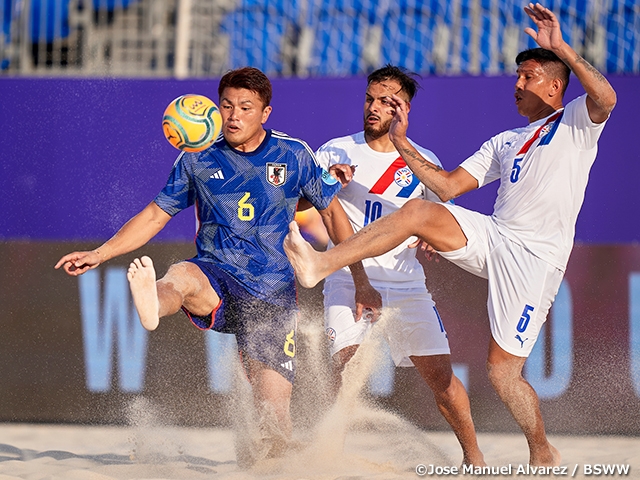 The match started with Paraguay scoring the opener in the first minute, but Japan managed to maintain their composure to possess the ball, which led to the equaliser scored in the second minute. The goal came when OBA Takaaki (Loewe Yokohama) applied pressure to induce a mistake committed by the opponent, which was capitalised by AKAGUMA Takuya (Lazo Apego Kitakyusyu). In the sixth minute, Oba delivered a lobbing pass to SAITO Gaiya (Sol Mar Praia Okinawa), which was redirected to Akaguma, who chested the ball to setup Oba’s acrobatic volley shot that captured the goal. Paraguay responded with an equaliser scored from a corner kick in the ninth minute to level the score at the first break. 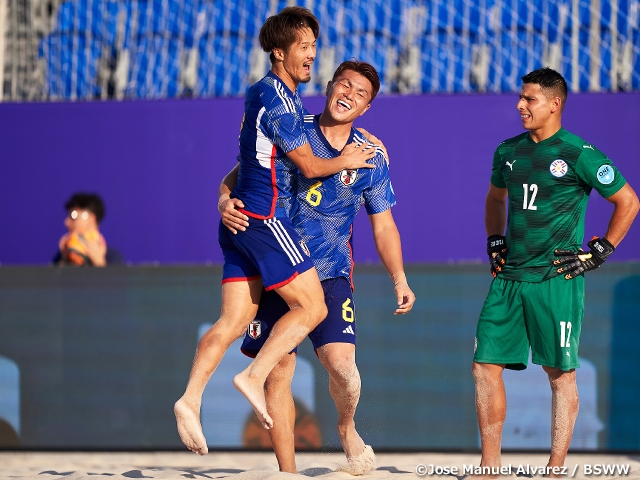 It was Paraguay who took the initiative in the second period. In the third minute, the ball was connected through the Paraguayan goalkeeper to the Ala to the Pivot, who directly struck a bicycle shot that found the back of the net. Although Japan was able to possess the ball, they struggled against the opponents’ set pieces, conceding another goal from a corner kick in the sixth minute. Japan’s only goal of the period came in the ninth minute, when MATSUO Naoya (Averdade Kumamoto BS) took on an opponent one-on-one at the side, before setting up the goal of KIBUNE Yuki (Averdade Kumamoto BS). However, Paraguay extended their lead to three goals before the third period by scoring back-to-back goals in the 11th minute.

With Paraguay showing signs of fatigue, it was Japan who scored the first goal in the third period, as Oba converted the lobbing pass delivered by Matsuo to start the action. However, Paraguay responded by converting a free kick in the sixth minute to regain their three goal lead. After the two sides exchanged one more goal apiece in the closing minutes, Paraguay won the match with a final score of 8-5.

FP #2 TANAKA Hayate (Tokyo Verdy BS)
We had a shared understanding as a team that we would want to continue with the things we did well against the USA yesterday, but we made it difficult on ourselves in today’s match against Paraguay. We won't have time to dwell on the loss, so instead we'll turn our attention to the upcoming match against Iran. We'll fight as a unit to win and advance to the next round.

FP #17 KIBUNE Yuki (Averdade Kumamoto BS)
Although our goal is to win the title, we ended up losing our second match of the tournament. I don’t think it is an overstatement to say that set pieces can make or break a game in beach football. We should reflect on the fact that we gave up a lot of goals from set pieces, but we'll make the necessary changes and return our attention to defeating Iran in the third game. I was able to boost my confidence by scoring a goal during the brief time I was on the pitch, but I would like to play with more passion and composure to create more opportunities for my team. Thank you very much for all the support. We are always committed to winning, so we hope to compete as a unit to demonstrate our determination in our match tomorrow.