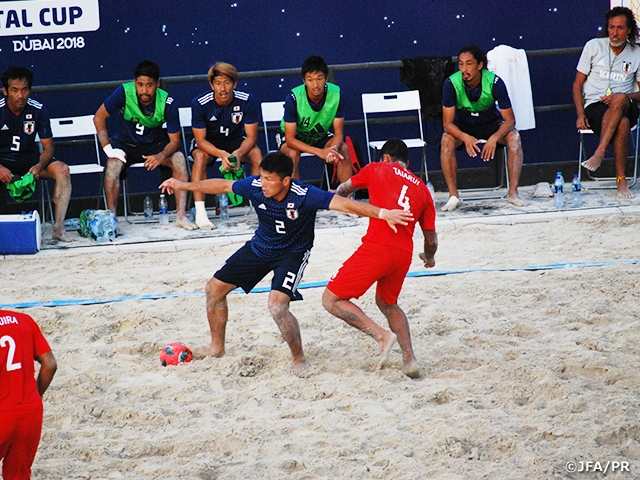 The match was kicked-off by Tahiti. Both teams entered the match with a rather passive approach as they sought for opportunities by moving the ball around. In the fifth minute, MATSUO Naoya captured the opening goal off a free-kick in the middle of the pitch. In the 10th minute, OKUYAMA Masanori received the ball from TABATA Teruki, and scored with a bicycle shot to give Japan a 2-0 lead. In the 14th minute, goalkeeper KAWAI Yusuke delivered the ball to MOREIRA Ozu in the right side, allowing him to one-time the ball into the far corner of the goal, finishing the first period with a score of 3-0.

In the 2nd period, Japan was forced to play in the defensive end as Tahiti added more pressure upfront, but the Japanese side managed to keep the score intact. In the 3rd period, Japan conceded a goal from a bicycle shot in the 32nd minute. AKAGUMA Takuya made a great individual effort to strike a shot, but his effort was denied by the goal post. Another opportunity was created by Akaguma, when he fought for the ball against the opposing goalkeeper to allow OBA Takaaki to take a shot at the empty goal, but the ball took an unfortunate hop and went off the target. Tahiti rallied back in the closing minutes of the match to close down the margin, but Japan defended well to keep their two-goal lead, as the match ended with a final score of 3-1.

Japan will now face the Oman Beach Soccer National Team on Monday 5 November as their final friendly match of this tour. 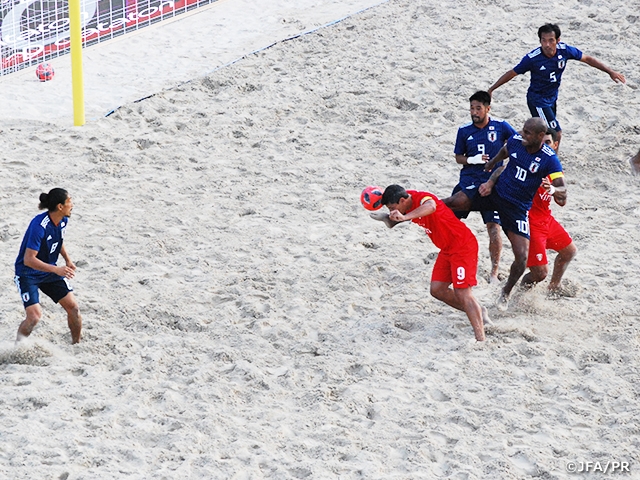 FP #3 IINO Tomoyuki (Tokyo Lequios BS)
Thanks to all the support from many people, we have been able to improve ourselves little by little. We have been focusing to keep communicating with each other in both offence and defence. We still have long ways to go, but we have been able to score in good shape. We must stay vocal and find ways to reduce the number of conceded goals. The team needs to be more creative and showcase different patterns once the opponents get used to our strategy. We will focus to heighten our quality of play and enjoy ourselves in the remaining matches and training sessions.

FP #6 MATSUO Naoya (Aveldage Kumamoto BS)
Tahiti had a similar type of tactics as Russia, whom we faced yesterday, so this match gave us an important opportunity for us to correct what went wrong in the match yesterday. We did very well at the beginning as the opening goal in the first period has given us great momentum. Even though we faced some difficult time after that, the fact that we managed to defend through that stint as a team has given us great confidence. Apart from the fact that we won today, it was good to see that everyone stayed on the same page and understood what we had to do. We still have one more match to play so we will prepare ourselves well so that we can earn a positive result. 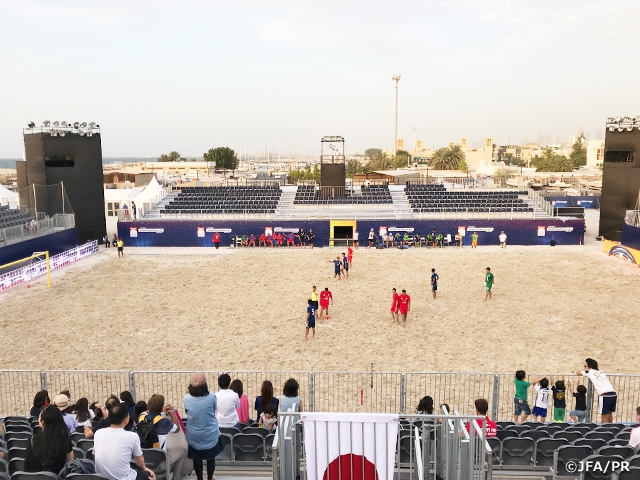