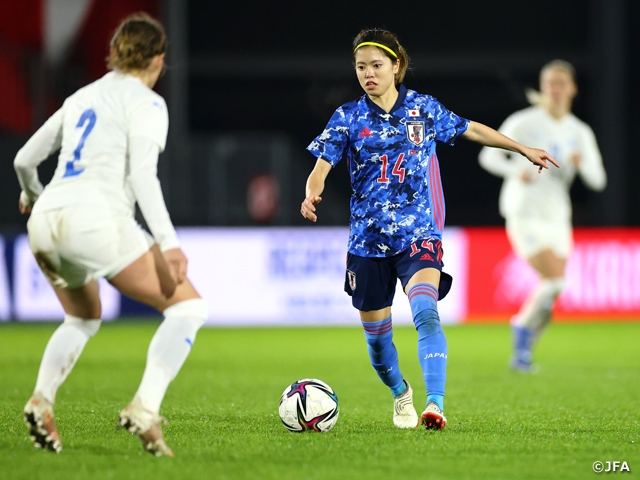 On Thursday 25 November, the Nadeshiko Japan (Japan Women’s National Team) played an international friendly match against the Iceland Women's National Team at Almere, Netherlands, where they lost 0-2 in the first match led by coach IKEDA Futoshi.

After arriving in the Netherlands on Monday 22 November, the team held three training sessions before facing the Iceland Women's National Team. Under the new regime of coach Ikeda, the team welcomed new players who were making their first trip overseas, as the team strived to build on the training camp held in October. With their eyes set on the AFC Women's Asian Cup India 2022™ to be held in January 2022, the team prepared for this friendly match by analysing their opponent and incorporating them into their game plan. Japan has won all three of their previous meetings against Iceland, but this match against a powerful and speedy opponent will be a valuable test for them to find where they currently stand as a team. The team entered the match with the intention to contain the opponent’s strong points, while demonstrating their concept of “winning the ball” in both offence and defence.

In the early stages of the match, both teams applied aggressive pressure from their frontline, showcasing a fierce battle to grab the initiative. Japan’s two forwards Ueki and KOBAYASHI Rikako (Nippon TV Tokyo Verdy Beleza) made runs to limit the pass options of the opposing defence line, while the midfielders worked in tandem to intercept the ball. Once winning the ball, Japan quickly delivered the ball upfront in attempts to create chances. Iceland also had their three attackers chase the ball aggressively, denying Japan from moving the ball freely. In the fifth minute, HASEGAWA Yui (West Ham United) won the ball at the centre of the pitch, before sending the ball into the right flank. It was SHIMIZU Risa (Nippon TV Tokyo Verdy Beleza) who responded to this ball, as she delivered a cross with her right foot, which was met by Narumiya. Although this attempt was not able to hit the target, it was a great sequence of plays showcased by Japan from their quick transition. 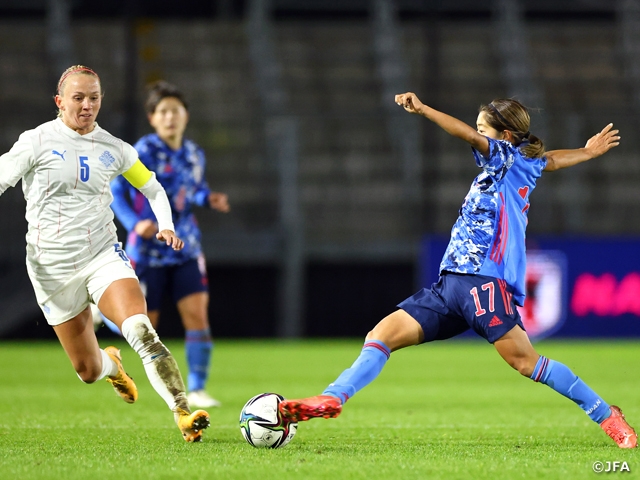 However, it was Iceland who scored the opening goal. In the 14th minute, Sveindis Jane JONSDOTTIR carried the ball down the right side from the halfway line all the way into the box before striking a powerful shot that found the back of the net, giving Iceland the early lead.

In efforts to equalise, Japan continued to apply aggressive pressure from their frontline, while adding layers to their offence once winning the ball. In the 20th minute, Nagano and Hasegawa exchanged passes in the left side before delivering the ball to Ueki, who made a sharp turn to fire a shot, but her attempt was saved by the Icelandic goalkeeper Cecilia Ran RUNARSDOTTIR. Iceland also created plays that threatened the Japanese goal by taking advantage of their speed and long throws, including the shot of Agla Maria ALBERTSDOTTIR, which was denied by the woodwork. 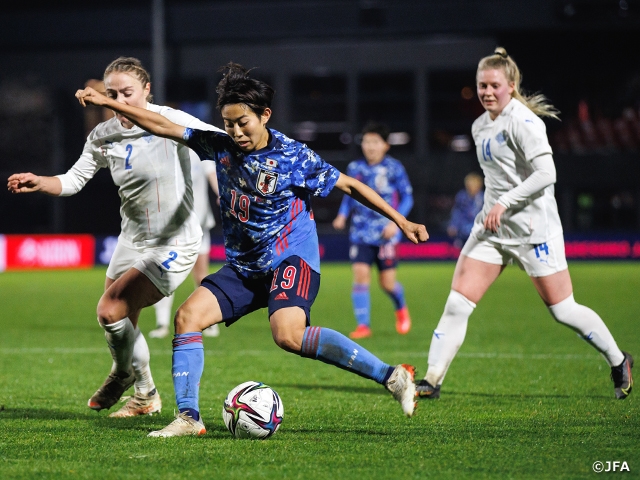 In the second half, the two teams went back and forth, with Japan continuing to work collectively to force turnovers, move the ball, and create chances, while Iceland kept their plays simple to attack the goal. In the 57th minute, coach Ikeda brought in SUMIDA Rin (Mynavi Sendai Ladies) and MIYAZAWA Hinata (Mynavi Sendai Ladies) to replace NAOMOTO Hikaru (Mitsubishi Heavy Industries Urawa Reds Ladies) and Narumiya, to revitalise their midfield, but it was Iceland who scored the next goal. In the 70th minute, Jonsdottir responded to a long ball delivered into the left side before sending a pass into the middle, which was met by Berglind Bjorg PORVALDSDOTTIR, who redirected the ball into the net to give Iceland a two goal lead. In efforts to rally back, Japan introduced TANAKA Mina (INAC Kobe Leonessa) and HAYASHI Honoka (AIK Fotboll) in the 77th minute, but with both teams showing tenacious efforts in defence, time ran out without anymore goals scored.

The Nadeshiko Japan is now scheduled to face the Netherlands Women’s National Team, who is ranked fourth in the FIFA rankings, on Monday 29 November. The team will try to make the most of this loss and train to raise the qualify of their plays in order to earn their first win under this new regime. 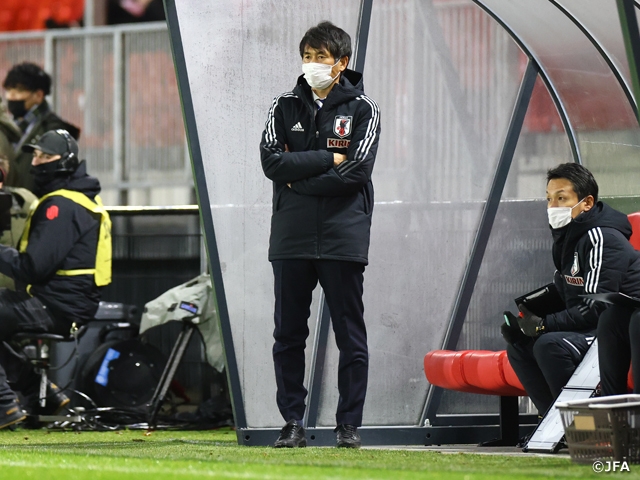 IKEDA Futoshi, Coach of Nadeshiko Japan (Japan Women’s National Team)
I am very disappointed with this result. However, despite only having a few days to prepare after arriving in the Netherlands, the players made plenty of efforts to showcase what we have shared and worked on as a team. In terms of how to move the ball forward, he wanted the players to be ready early. We were also focused on the angles when supporting each other, and I think we were able to link up well to carry the ball into the opposing territory. However, we couldn’t stay on the same page at the end and struggled to convert our chances in the attacking third. I think we need to be more in tune with each other, and I think these players are capable of doing that. We also made too many simple mistakes, so that is another aspect we must address. In the early minutes of the match, we were a bit late on applying pressure on the opposing midfielders, which gave them enough space to deliver long passes. In addition, I think that we need to work on our defence when facing such long balls. With the team trying to apply pressure from the frontline, our attackers did a great job to limit the passing options, while the defensive midfielders did their part to provide coverage in the midfield, as the players showed their ability to make the adjustments depending on the opponent’s positions. It would be even better if we can communicate and smoothen this process at an earlier stage. With this being one of the few opportunities for us to play abroad, I wanted the players to gain experience while also striving for a victory, but at the same time, I wanted to test the combinations and the potential of various players, so I decided on today’s line-up based on their conditions and balance of the team.

DF #3 MINAMI Moeka (Mitsubishi Heavy Industries Urawa Reds Ladies)
This was a match we really wanted to win, so I am very disappointed with this result. It was our first match under the new regime, and we entered the match ready to take on the challenge, so even though we knew there would be errors, we didn't want to concede any goals today. We will try to make the most of this experience to do better in our next match. While the team entered the match with the concept of applying pressure from the frontline, we also talked about the need of creating times when we don’t press forward. However, when the entire team is not on the same page, goals like that can happen. Knowing that the team is pressing forward, we must be aware of the space created behind the defence line, because if we concede from a simple long ball, all of our efforts will be wasted. In order to reduce the number of goals scored by plays like that, we need to be more conscious of the space behind the defence line. It is a shame that we lost today, but after the match we talked about how we need to learn from the errors we made and try to get better ahead of our next match against the Netherlands. I hope that we will be able to correct the situation in the right direction and better ourselves by keeping a positive mind.

MF #14 HASEGAWA Yui (West Ham United/England)
I didn't participate in the first training camp and had only two or three training sessions to work with the team, so although I heard the coach's intentions in words, I actually had to explore them on the pitch. As a team, we were able to make the adjustments on the pitch to correct the defensive flaws we saw earlier in the match, and I think that was a good thing. We hope we can correct them more quickly in the future. However, I felt that we didn’t show much variation in our offence, as we struggled to break down our opponent when the central area was congested. Usually, there are space left open for the number 10 position, but we couldn’t find ways to create opportunities from that position today. It is a difficult task, but we need to be more creative to have more variations in that area. In the past, we have tried to correct our flaws in the first half, but it has not been easy to do so. Today, we were able to make the adjustments by staying on the same page as a team, so I think we can take that as a positive. We were caught offsides several times in our offence, but that is something we can fix by adjusting the timing of both the passing and receiving end. In terms of combinations, I think we can make the distance between our forwards and midfields a little closer, and also add layers to our offence by having the side-midfielders take the inside position when the full-backs are pressing forward.

MF #17 NARUMIYA Yui (INAC Kobe Leonessa)
I am very disappointed with this 0-2 loss. Personally, I felt something different from the way I usually play, which made me realise that I need to improve myself to compete at this level. This was my first match against a foreign team since the La Manga International Women's U-23 Tournament in 2017, and I was amazed by the unique speed, timing, and athleticism of the foreign players. Usually in the WE League, I can get by with my mistakes by covering them with my own plays, but those mistakes could cost the team a goal at the international level. I felt the need to improve the quality of each of my plays compared to how I have been playing in the WE League. In terms of the concept of “winning the ball,” which is something coach Ikeda has been stressing since taking over the team, we forced fewer turnovers than our opponent and couldn’t score goals, so we couldn’t achieve any of our goals today. Even if we cannot win the ball by ourselves, we need to apply more numbers to take a collective approach, while also taking advantage of our agility, which is one of Japan’s strengths.