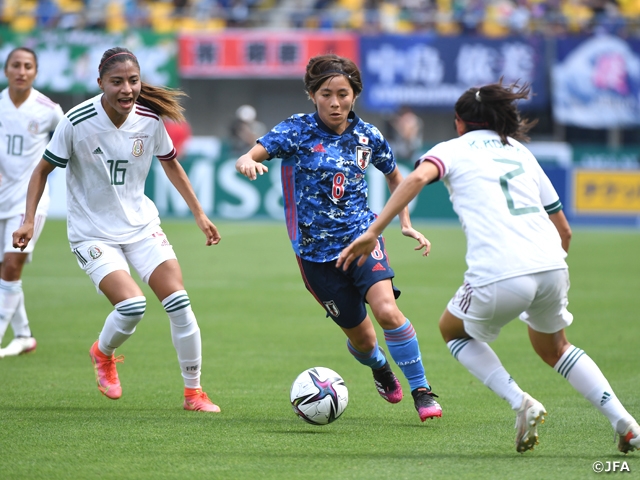 Following their match against Ukraine, a round of applause was once again given to the medical and essential workers who are fighting the pandemic on the front line.

For Japan, this was their final match before announcing the roster for the Tokyo Olympics. With the team entering this match with a two day rest, coach TAKAKURA Asako made six changes from the starting line-up against Ukraine. IKEDA Sakiko (Mitsubishi Heavy Industries Urawa Reds Ladies) started in goal, while MINAMI Moeka (Mitsubishi Heavy Industries Urawa Reds Ladies) and MIYAGAWA Asato (Nippon TV Tokyo Verdy Beleza) featured the four-back defence line. TANAKA Mina (Bayer 04 Leverkusen) also got her start, as she was paired with IWABUCHI Mana (Arsenal) up top.

The match started with referee KOIZUMI Asaka blowing the whistle, as Japan showed great aggression from the early minutes. In the seventh minute, Iwabuchi delivered a cross from the right flank, allowing Tanaka to fire a shot at the near side, but her shot deflected off the post. Mexico responded in the 28th minute, when Jacqueline OVALLE intercepted Japan’s build-up pass before carrying the ball all the way into the box and striking a powerful shot, but her attempt was saved by Ikeda.

The opening goal came in the 35th minute, when HAYASHI Honoka (AIK Fotboll) picked out Iwabuchi side open in the central area, allowing the striker to drive into the box and calmly slot the ball into the right side of the goal, giving Japan a 1-0 lead at halftime.

After creating numbers of opportunities at the end of the first half, Japan picked up where they left off in the second half. 30 seconds into the half, Iwabuchi delivered a sharp cross from the left, allowing Tanaka to make a sliding effort to redirect the ball into the net. 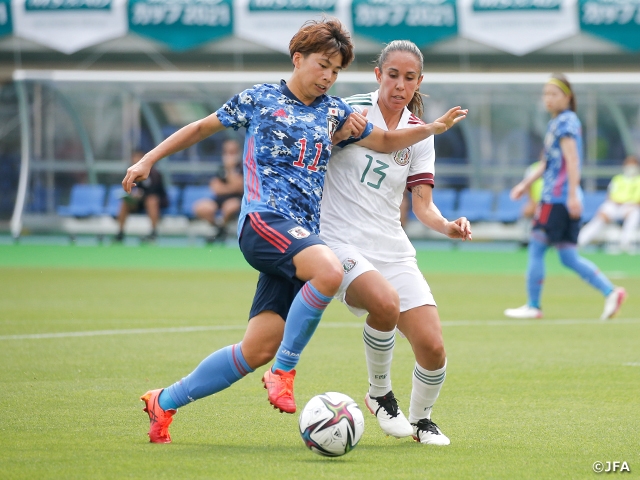 Despite scoring their second goal, Japan conceded to Mexico just three minutes later. The goal came from a play initiated by Stephany MAYOR, who drove up the flank before sending the ball into the mix, allowing Alison GONZALEZ to convert the ball from close range. For Japan this was their first goal conceded in 2021.

It only took five minutes for Japan to regain their two-goal lead, as the team’s third goal came from a FK won by HASEGAWA Yui (AC Milan) at the right flank. NAKAJIMA Emi (INAC Kobe Leonessa) quickly restarted the play, as she picked off Iwabuchi at the edge of the box, who delivered a superb cut back to allow MOMIKI Yuka (OL Reign) to fire the ball into the net. Momiki has now scored in each of the four matches played for the Nadeshiko Japan.

Coach Takakura took full advantage of the six substitutions allowed for this match, bringing in fresh legs while altering their formation as the match neared the hour mark. After being introduced to the match in the 71st minute, ENDO Jun (Nippon TV Tokyo Verdy Beleza) assisted the goal of another second half substitute, KINOSHITA Momoka (Nippon TV Tokyo Verdy Beleza), in the 74th minute, before scoring a goal herself in the 88th minute. For Kinoshita and Endo, this was their first goal scored with the Nadeshiko Japan. 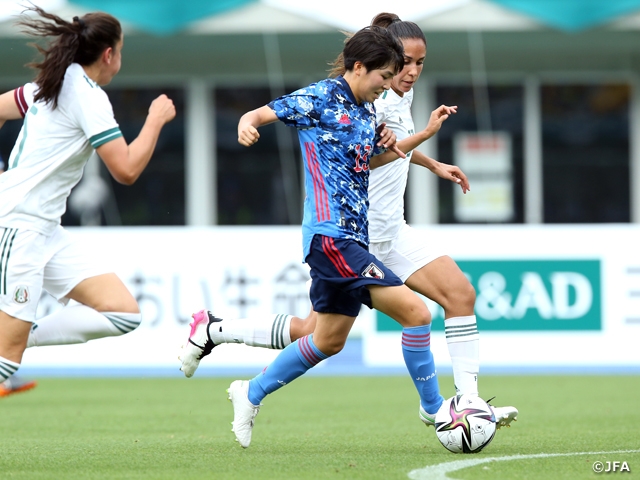 With all five goals coming from five different players, the Nadeshiko Japan earned a convincing 5-1 victory in front of the 3,890 fans who gathered at Kanseki Stadium Tochigi.

The Nadeshiko Japan will train in Tochigi until Wednesday 16 June.

TAKAKURA Asako, Coach of Nadeshiko Japan (Japan Women's National Team)
It was great that we were able to face Mexico who was in good form. Following our match against Ukraine, we focused on improving our defence, especially how we applied pressure to the ball. In offence, we tried to keep the ball moving effectively and make collective efforts to change the rhythm of our attacks. Although we conceded a goal, I think it is commendable that we managed to score five goals in this win. These two matches reminded us that the matches at the Olympics will be very tough, so I would like to carefully examine what kind of battle we are up against and make my team selection accordingly.

MF #13 KINOSHITA Momoka (Nippon TV Tokyo Verdy Beleza)
(Reflecting on the goal scene) When Jun-san (Endo) had the ball, I knew she was going to deliver a cross, so I made my run into the goal area. I wasn’t able to control the ball very well, but I was able to keep my composure to score that goal. My shots may not be powerful, but I am always anticipating to thread the ball between people’s legs, or send the goalkeeper to the wrong direction, so I am glad that shot went where I wanted. I am happy that I was able to score my first goal with the national team, but this match reminded me that I still have plenty of room for improvements, so I hope to use this experience to reach a higher level as a player.

FW #8 IWABUCHI Mana (Arsenal)
It was great that we were able to earn a victory, and it was also encouraging to see five different players score a goal. However, similar to our match against Ukraine, we did not start off the match very well, so that is an aspect we must work to improve on. We don’t know who will be selected into the squad for the Olympics, but we will continue to work together as a team for the remaining three days and strive to become a better team.

FW #10 MOMIKI Yuka (OL Reign)
We knew this match against Mexico was going to be a tough one. We entered the match with the intention to raise the overall quality of our plays, while making sure to earn a victory. The fact that we managed to win by scoring multiple goals gives us confidence ahead of our match against Chile at the Olympics. All of the goals I scored in the past four matches were not necessarily difficult, but they were not just given to me neither. It helps that I was able to score goals in these four matches before the final roster is announced, but I was also reminded that I need to be able to score goals from a wider variety of plays.

FW #11 TANAKA Mina (Bayer 04 Leverkusen)
We weren’t able to apply pressure effectively from the front line at first, but we managed to make adjustments as the match progressed. In the play where I scored the goal, I knew Buchi-san (Iwabuchi) was going to deliver a fast cross, so sprinted towards the goal. As a forward I am always eager to score goals. It was great that I was able to score a goal, but I also waisted a lot of opportunities in the first half. Although I was able apply pressure to induce mistakes from our opponents, I feel like that is an aspect I still need to improve on.

FW #12 ENDO Jun (Nippon TV Tokyo Verdy Beleza)
Our team was playing with great momentum when I entered the match, so I just focused on finishing off the match strong. Although my minutes were limited, I am glad that I was able to assist a goal from my cross, which I consider it as my strong point, and score my first goal with the national team. I knew I had to produce results in order to be selected into the final roster, so I feel like I was able to fulfil that part. We are now done with our matches, but we still have three more days remaining in this camp, so I will continue to stay focused and try to make a case for myself. 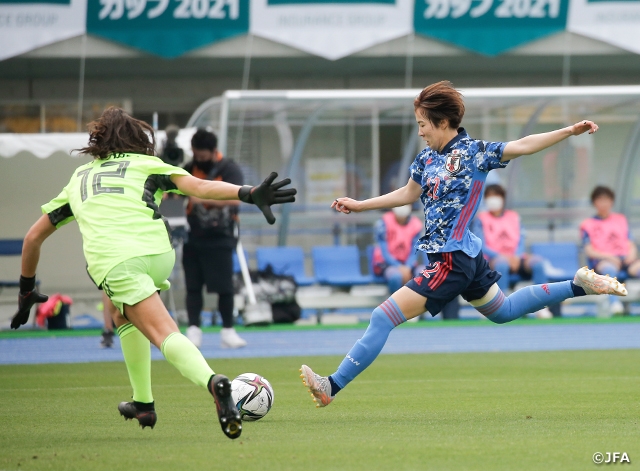