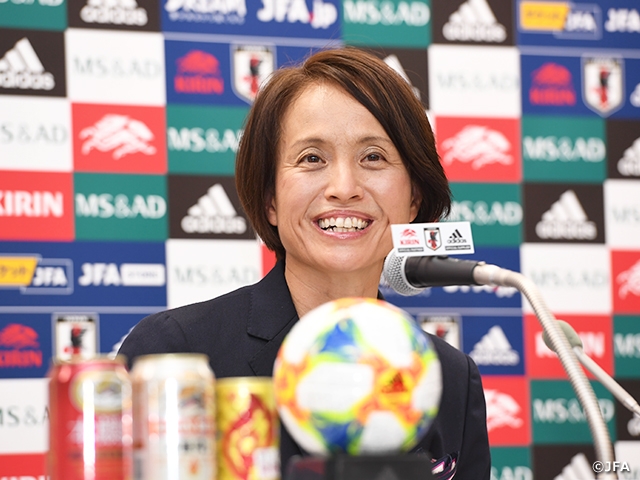 On Thursday 24 October, coach TAKAKURA Asako of the Nadeshiko Japan (Japan Women’s National Team) appeared in a press conference held at JFA House in Tokyo to announce the roster for the MS&AD Cup 2019.

While members from the recent FIFA Women’s World Cup, such as KUMAGAI Saki (Olympique Lyonnais/France) and IWABUCHI Mana (INAC Kobe Leonessa), were named into the roster, NAOMOTO Hikaru (SC Freiburg/Germany) and MASUYA Rika (INAC Kobe Leonessa) made their return to the squad. For goalkeeper ASANO Natsumi (Chifure AS Elfen Saitama), this was her first selection into the Nadeshiko Japan. 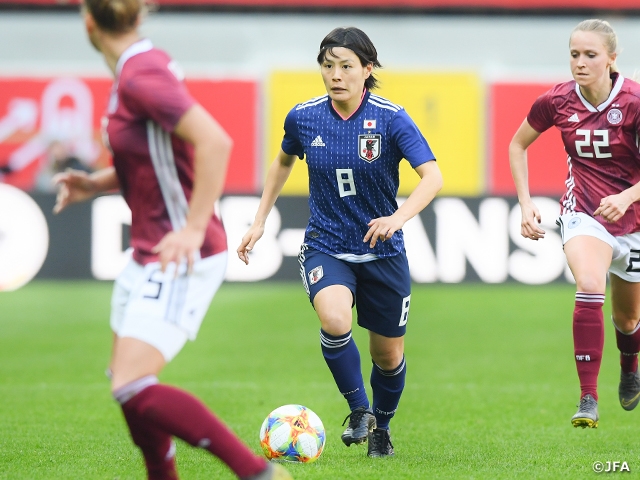 With Naomoto making her return to the squad since this April’s Europe tour, and Masuya being selected for the first time in nearly a year, coach Takakura gave her reasonings, “While the team has restarted towards the Tokyo Olympics, Naomoto has been constantly playing at her club in Germany, while Masuya has shown great form at INAC Kobe. I want to see how they can integrate with the members who fought through the World Cup.” Regarding the 22 year old Asano’s first selection into the Nadeshiko Japan, the coach commented, “She still has lots of work to do, but she is good with her feet. In order to build up our plays from the goalkeeper position, her foot skills are very attractive.”

During the question and answer session, the Japanese coach was asked about the Rugby World Cup that is currently taking place in Japan. With the Japan National Rugby Union Team advancing through to the knockout stage by winning all four matches at the group stage, coach Takakura shared her aspiration to follow their footsteps, “Although they are playing a different sport, they fully exemplified the Japanese spirit. I watched their matches thinking we hope to showcase a similar performance in our matches, as well.”

The Brave Blossoms (Japan National Rugby Union Team) ended their tournament run at the quarterfinals against South Africa. Coach Takakura shared her take on their upcoming match, “I am not sure if we can call it a revenge, but if we can win the match with a positive performance, it will mean a lot to us. We hope to enter the match with strong determination and showcase a solid performance that can match the rugby team.” 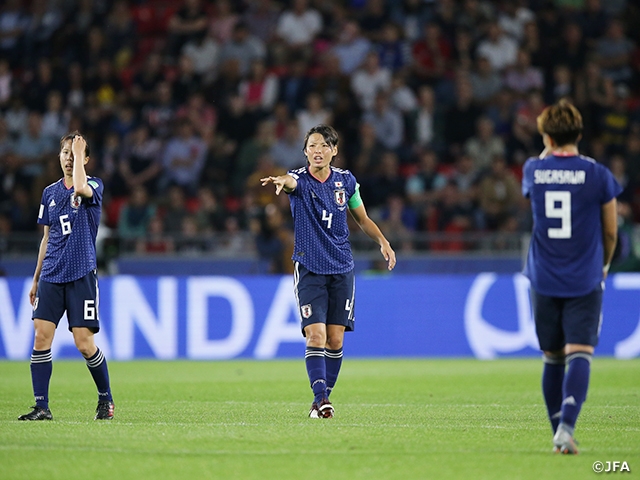 TAKAKURA Asako, Coach of Nadeshiko Japan (Japan Women’s National Team)
South Africa has been eliminated at the group stage during the recent FIFA Women’s World Cup, but they have showcased great aggression in their matches. The team is led by a female coach, a high-spirited coach who I personally know. She is passionate about popularising women’s football in Africa and her players feed off of her enthusiasm. They are a very aggressive team with great athleticism, and they are capable of creating opportunities through their individual strengths. They have a very different playing style compared to the American and European teams we normally face, so this match will provide the Nadeshiko Japan with a unique and precious experience ahead of the Tokyo Olympics. Last month, our team got off to a great start against Canada. Since losing at the World Cup, the players have shown an even stronger sense of determination during our training sessions. I am also sensing that everything we have worked on is finally getting rooted into the team, and we are making forward progress as a team. That is why we hope to showcase a dominating performance against South Africa and earn a convincing victory. We are striving to become a team that does not lose, so as much as we value the overall performance, we would like to be more committed towards the results.

*1 The schedule is subject to change due to the team condition, the weather, etc.
*2 With the Emperor's enthronement ceremony (enthronement parade) taking place on the same day, the kick-off time has been changed to 12:45.