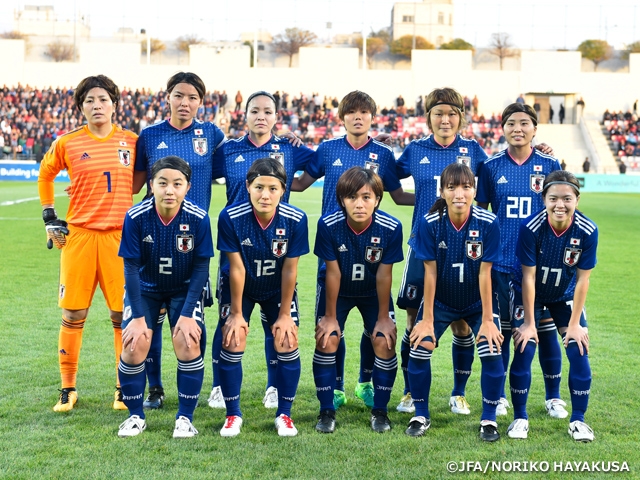 On 24 November, Nadeshiko Japan had an international friendly match against Jordan Women’s National Team in Jordan, where next year’s AFC Women’s Asian Cup will take place. Japan kicked off the match at 4 p.m. with the ball at sunset when the temperatures started to fall.

TAKAKURA Asako, coach of Japanese women’s team, explained about her aspirations to her players before she sent them on to the pitch, ‘It is important that we not only play aggressively, but also finish strongly. We are looking to elevate our game one step higher by the end of the game to get closer towards our ultimate goal of becoming the best team in the world.’

The Japanese internationals responded well to their coach’s advice and took control of the match by defending tenaciously from the frontline. The Nadeshiko squad were superior to the Jordanian counterparts both individually and as a whole team, and once they reclaimed possession of the ball, they spent the majority of time in the opponents’ half.

The expectation of scoring an opening goal rose as SAKAGUCHI Mizuho showcased her talent and was instrumental in creating some of the earlier chances for Japan. Added was the variety of attacking options that the Japanese side enjoyed with NAKAJIMA Emi taking higher position up the pitch and combining with IWABUCHI Mana to threaten the opponents from the right side.

Nadeshiko Japan broke the deadlock and scored an opening goal in the 27th minute. Iwabuchi beat the offside trap and evaded the challenge of the opposing defender before she cut inside and fired in a stunning goal to give her side an early lead. It only took the Japanese squad three minutes to double the advantage. Iwabuchi exploited the open space behind the Jordanian defence with a neat give-and-go with Sakaguchi and converted the one-on-one chance with the goalkeeper to net her second goal of the match.

Japan had their scary moment when they nearly scored an own goal towards the end of first half, but avoided conceding a goal, and kept their two-goal lead at the break. 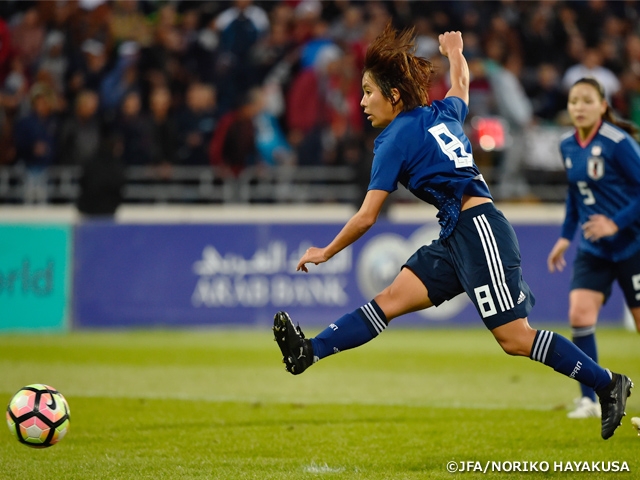 Nadeshiko team made three substitutions at halftime and continued to threaten Jordan’s goal with their high pressing. In the 56th minute, Nakajima fashioned a wonderful chance after she collected a through ball and sent in a cross to the front of the goal, where UENO Mami reacted well and attempted to hit the third for Japan, but was denied by a brilliant save from the opposing goalkeeper.

In the 63rd minute, Japan had decided to replace captain KUMAGAI Saki with UTSUGI Rumi, who also became the team captain on the pitch for the remainder of the match. Immediately after she was brought on from the bench, she fired from range, and her shot was on target, but was saved again by the Jordan’s keeper.

Time passed by without Japan scoring any additional goals, and the most threatening moment of the game came in on 73 minutes. From a quick restart, Jordan found the space behind the Japanese backline and surged all the way up near the Japanese goal, but SAMESHIMA Aya rushed back and limited the course of the shot, which IKEDA Sakiko made a fine save and protected their goal. In the remaining quarter of the match, Japan had several chances, but lacked the finishing touch to stretch their two goal lead, before they grabbed a 2-0 win over Jordan. 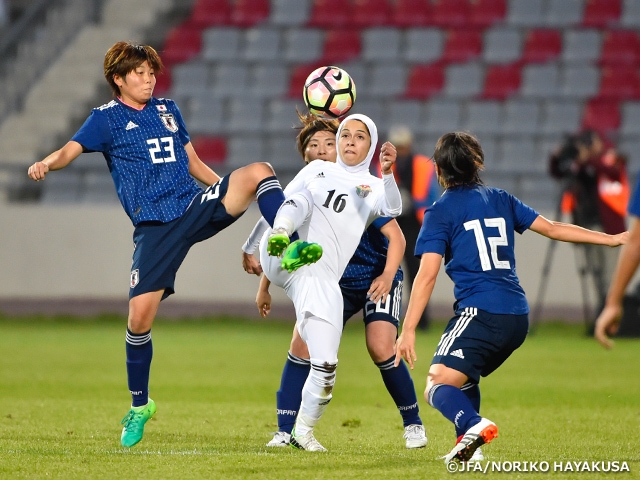 TAKAKURA Asako, Coach of Nadeshiko Japan (Japan Women’s National Team)
I am glad that we won the match. Considering that we were by far the superior side, I am not fully satisfied with the performance of my team, who lacked creativity in their build-up plays and sent final passes that were easily read by our opponents. Having said that, I understand that not all things will go as we wish and saw few great individual efforts from my players. In the game, IWABUCHI Mana scored a goal, and OYA Ayumi and MIYAKE Shiori both displayed their competitive spirit and threatened the opponents. However, I observed that the players were too careful about connecting passes and, as a result, they looked rather passive at times. This is one of the areas that we need to work on. I am also pleased that I gave many players the chance to be on the pitch and observed how they perform in actual game, while I thought through some of the different positions that each player could play. Still another positive takeaway is that we experienced different turf conditions as well as refereeing in an away game. All being considered, we had a very productive game.

MF #10 SAKAGUCHI Mizuho (NIPPON TV BELEZA)
We hardly had any information about our opponents and weren’t sure as to how they might play today. I focused myself on making as many ball touches as possible. As a result, I found myself receiving the ball in different areas of the pitch. At the beginning, I went all the way back near the centre halves to collect the ball and tried to initiate our attacks from there, but moved forward whenever there was less pressure. Jordan did not press us hard and I found it rather difficult to play. If they had come and pressured us more, then we could have taken advantage of the pressing and attacked. Against the side that stayed back, we had to decide whether we would break through their defence by sending quick passes or challenging and getting past the defenders with individual efforts. This is one of the areas that we need to address and think it over as a team.

FW #8 IWABUCHI Mana (INAC KOBE LEONESSA)
Regarding the first goal that I scored, I did well to evade the challenge of the opposing defender with a quick turn. It wasn't a great shot, but I’m still glad that it went in. The second goal was better considering that we broke through their defence as a team. It was the first time that I paired up with HAJI Madoka upfront, and we discussed prior to the game that we should keep our distance close. In defence, I was able to make a number of good runs to help my team. I usually come off the bench and was a bit tired after the game, since this was my first time to start the game and played for the full 90 minutes.