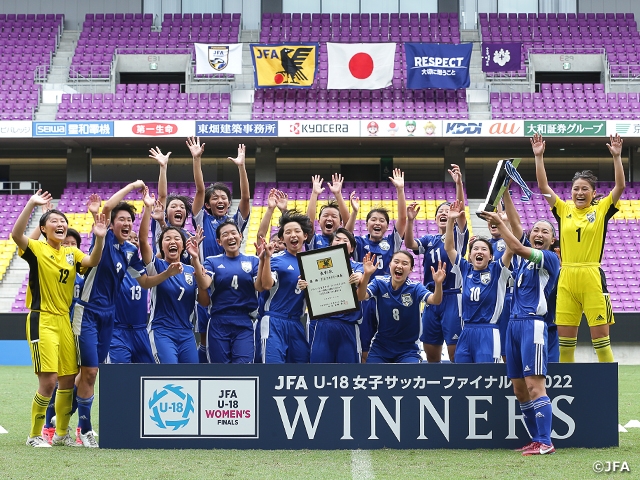 The title match of the JFA U-18 Women's Football Finals 2022, a tournament to determine Japan's true champions of the women's U-18 age group, was held at Sanga Stadium by KYOCERA on Monday 19 September.

The final between JFA Academy Fukushima, runners-up of the XF CUP 2022 the 4th Japan Club Youth (U-18) Women's Football Tournament in August, and Jumonji High School, runners-up of the 2022 Inter-High School Championships in July, was a heated contest that came down to the wire.

The match started with AC Fukushima taking the lead in the eighth minute, when TANIKAWA Momoko forced a turnover deep in the opposing flank before carrying the ball into the centre. “We didn't take many shots in the first half against Daisho Gakuen High School (in the semi-finals), so we kept telling each other to take more shots from the first half in today's game,” said Tanikawa, as the left footed shot taken by the midfielder found the back of the net.

Following the opening goal, AC Fukushima continued to take control of the ball possession, but it was Jumonji High School who scored the next two goals. The equaliser came in the 19th minute, when UJIHARA Rihona converted the cross of MIYAKE Mahiro with a header. 10 minutes later, Ujihara intercepted the ball deep in the opposing end before slotting the ball into the open net to give Jumonji the lead. 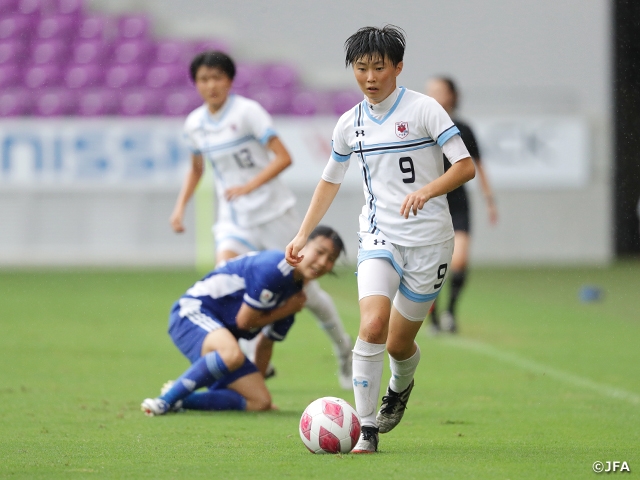 AC Fukushima’s team captain HAYASHI Manaka later reflected on the conversations she had with her teammates during halftime, “We were behind, but I kept reminding my teammates that we were still in the game and that we needed to fight until the end. Including the players on the bench, I told everyone to play more aggressively and to initiate more actions.”

“We were able to play with composure to keep the ball moving and anticipate for our opportunity to exploit an opening in the second half,” said Tanikawa, as MATSUKUBO Manaka made numerous runs into the open space to threaten the Jumonji goal. Their approach came to fruition in the 51st minute, when the ball was connected through Matsukubo and ITAMURA Mao before taking a deflection off an opposing defender. It was Tanikawa, who responded to this loose ball and struck a shot that captured the net. 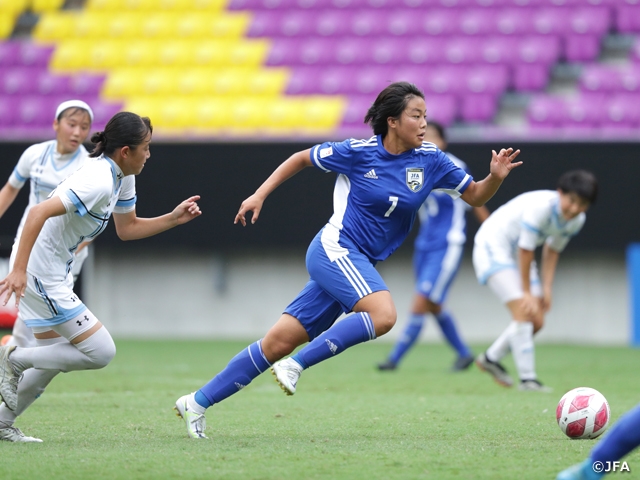 With momentum on their side, AC Fukushima took the lead in the 54th minute, when Tanikawa delivered a ball into the space behind the Jumonji defence line, allowing Itamura to take on the goalkeeper one-on-one, in which the striker calmly slotted the ball into the right corner of the goal to make it 3-2. In attempt to equalise the game once more, Jumonji High School rallied in the closing minutes, but AC Fukushima showcased tenacious efforts to keep their lead, as the Fukushima side was crowned as the inaugural champions of the JFA U-18 Women's Football Finals.

YAMAGUCHI Takafumi, Coach (JFA Academy Fukushima)
After watching the footage from the semi-final, we felt that Jumonji High School would be a major obstacle to our goal of becoming the national champions. The players managed to keep themselves compact to cover each other while also making repeated challenges to the ball. After taking the lead, we made a couple mistakes that cost us two goals but managed to enter the second half with great composure. We were able to turn the game around because we kept the ball possession and repeatedly made attempts to exploit the open space. I am really proud of the way we played today.

MF #6 HAYASHI Manaka (JFA Academy Fukushima)
We finished as runners-up in the Club Youth Women's Football Tournament, which I think was very frustrating for everyone and it was also very frustrating for me watching it on the stream (because she was participating in the FIFA U-20 Women's World Cup Costa Rica 2022™). We used our frustration as motivation to practice for this tournament. We were also looking forward for this opportunity to face teams from the High School Sports Federation, which is something we don't normally get to do. I am very happy because we were able to redeem ourselves with this victory. It was also great to face many different types of players through this competition.

ISHIYAMA Takayuki, Coach (Jumonji High School)
Many of the players in Jumonji have the experience of being rejected by JFA Academy and other academies of the WE League teams. We also have many players who entered Jumonji from high school after failing to advance through their club teams. This match reminded me that these players have grown through all the adversities they faced to become much better players. However, we did see flaws in various areas, including our ball control and pass speed, so those are some of the areas we hope to improve on. We now only have the All Japan High School Women's Soccer Tournament left to play. I hope all the efforts made by these players will get paid off at the All Japan High School Women's Soccer Tournament, especially after finishing second in both the Inter-High School Championships and the JFA U-18 Women's Football Finals.

MF #10 NOGUCHI Niina (Jumonji High School)
AC Fukushima were a very technical team, so we tried to outrun them and win with our teamwork. However, we were simply outplayed by them. We will now try to go all the way at the All Japan High School Women's Soccer Tournament. We received tremendous support from the crowd in this tournament, which allowed us to showcase a great performance against Cerezo Osaka Sakai Girls (at the semi-finals), and it really reminded me of the power of the supporters.