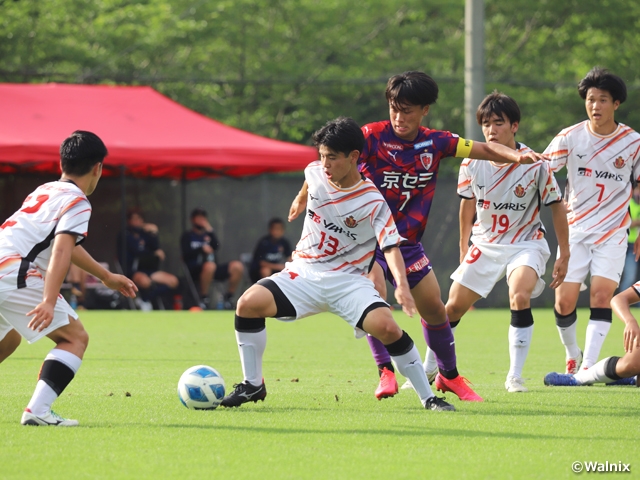 After seeing multiple matches getting postponed, Nagoya entered their first league match since facing Sanfrecce Hiroshima F.C Youth (Hiroshima) on 25 April. However, the Nagoya side was forced to rotate more than half of their starting players, as some players were called-up to the top team for the AFC Champions League, while some were side-lined due to injuries. Despite the irregular situation, the Nagoya players showed great optimism as SATO Taisei (#6) mentioned, “We told each other that this was an opportunity to make a case for ourselves.” Although they seemed to lack composure in the early minutes, Nagoya gradually picked up their pace and scored the opener in the 20th minute, when TOYAMA Yuto (#15) struck a powerful shot that found the back of the net.

Kyoto, who entered the match without a win after playing four matches, were fully motivated to earn their first win, as OTSUBO Kenya (#4) mentioned, “We were determined to win this match as a team.” With Nagoya applying aggressive pressure from their front line, Kyoto anticipated to exploit the backline by sending long balls into the open space. In the 39th minute, HIRAGA Sora (#11) responded to a pass of UEDA Rikuto (#2) to score the equaliser before the break. 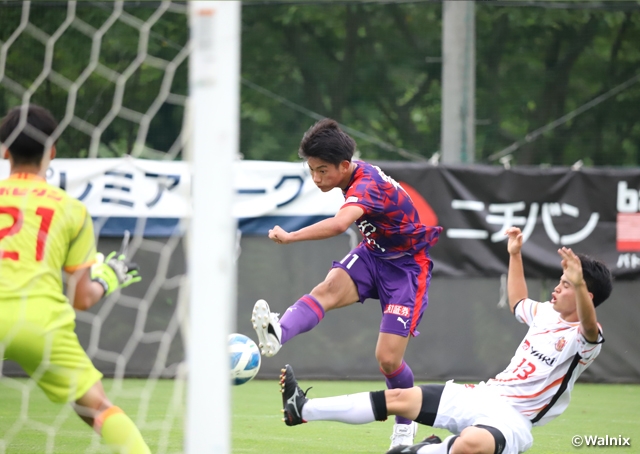 Nagoya retook the lead in the 51st minute, when Sato converted the PK he earned himself, but Kyoto brought the two sides back to equal terms in the 54th minute, when KOYAMA Mao (#17) scored a superb shot following a corner kick.

With momentum on their side, Kyoto came close to taking the lead for the first time in this match, as TOYAMA Haruki (#7) later reflected, “After scoring the equaliser, we thought we could ride the momentum to win the match.” In the 64th minute, the ball was connected through Ueda, YAMAZAKI Haru (#8), and Toyama, before finding Hiraga in front of the goal, but the striker’s final shot fell short from capturing the target.

In efforts to change the dynamics of the match, Nagoya utilised their substitutes to bring in fresh legs. Their approach came to fruition when NISHI Rinsei (#24), who entered the match as a late substitute, was brought down in the box to earn a PK. It was KATO Gen (#5) who stepped up to take the spot kick, as the team captain reflected on the scene, “I wanted to give the PK to Rinsei, but I didn’t want him to feel the pressure, so I decided to take responsibility.” With Kato converting the PK, Nagoya got ahead for the third time in this match. With Premier League debutant KITAHASHI Masaharu (#21) making two spectacular saves in the closing minutes, Nagoya earned their third win of the season. 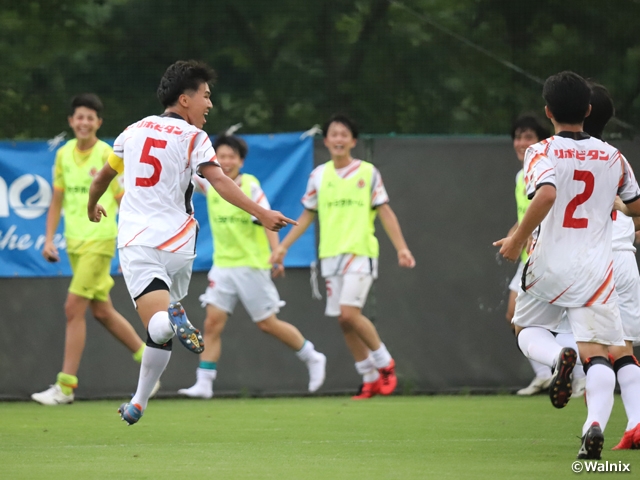 SHIGAKI Ryo, Coach (Kyoto Sanga FC U-18)
The players fought hard until the end, despite the tough situation. Although we are without a win thus far, all of our matches have been close. We once again conceded form set-plays, but the players played with great intensity, applied aggressive pressure, made many runs, and showcased a positive attitude just like our top team. It goes without saying that we are lacking match experience, so we hope to learn from these losses and make the most of the future matches.

DF #4 OTSUBO Kenya (Kyoto Sanga FC U-18)
Despite the ongoing pandemic, we feel grateful to be given the opportunity to play in the Premier League. I kept telling myself not to take for granted of this given environment. We are yet to win a match this season, so we entered the match with the intention to showcase our challengers’ spirit and work hard as a team. I was responsible for the PK that led to our opponent’s second goal, so I was very thankful to my teammates when they scored the equaliser and made me even more fired up to win the match. We were able to work hard in this match, so we hope to raise the quality of our plays in the final third to win matches.

KOGA Satoshi, Coach (Nagoya Grampus U-18)
While we were away from the Premier League for two months, we focused on raising the individual level, so that each player can make a difference in both offence and defence. Including the second goal we scored from a PK, each player showcased their ability to create opportunities. Although the third grade players have shown their characters and strengths, it wasn’t as evident with the players from the lower classes. However, they were able to showcase their character to win this match, so this gives us great confidence moving forward. The players who are currently side-lined might be feeling the pressure from these rising talents.

MF #6 SATO Taisei (Nagoya Grampus U-18)
Our starting line-up changed dramatically compared to the previous four matches, so we knew this was going to be a tough match. I was the only attacker who started in the previous matches, so I entered the match with the intention to lead the team to victory. In the scene where we scored the second goal, I was able to see how much I have improved over the past two months. With players like Toyama scoring goals to make a case for themselves, it brings more competition and inspiration to the team.

Led by the opening goal scored by TANADA Ryo (#10), first place Sanfrecce Hiroshima F.C Youth (Hiroshima) scored three unanswered goals in the second half to claim a win over Cerezo Osaka U-18 (Osaka). FUJIWARA Kensuke (#13) scored two goals in the second half to give Jubilo Iwata U-18 (Shizuoka) a come from behind victory over Vissel Kobe U-18 (Hyogo) at home. Ozu High School (Kumamoto) kept their one goal lead against Higashi Fukuoka High School (Fukuoka) to claim the bragging rights in the matchup between two Kyushu sides. Gamba Osaka Youth (Osaka) suffered their first loss after conceding three goals to Sagan Tosu U-18 (Saga).