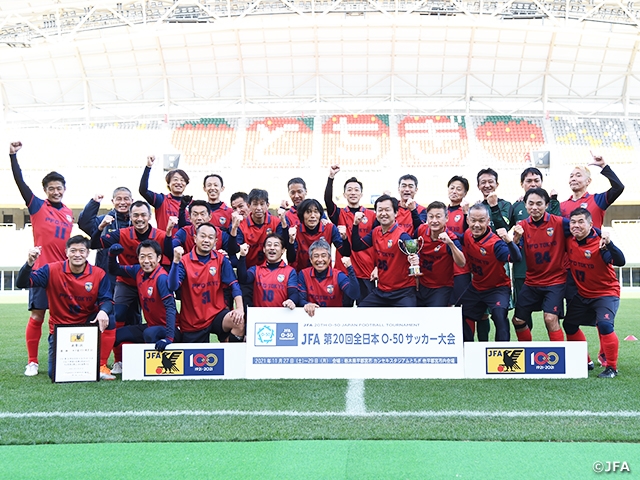 The final day of the JFA 20th O-50 Japan Football Tournament took place on Monday 29 November, and at the end of the day, Shijukara Club Tokyo 50 (Kanto1/Tokyo) was crowned as champions for the first time.

In one of the two semi-final matches that kicked off simultaneously at 10:00, the opening goal scored in the fifth minute turned out to be the game winner for Shijukara Club Tokyo 50, as they defeated Nicols FC Senior (Kansai1/Osaka) to reach the final. For Hyogo SC (Kansai 2/Hyogo), the goal scored just before halftime gave them the victory over Kumamoto Higo Senior (Kyushu2/Kumamoto), as the winners of the two closely contested semi-final matches were both determined by a score of 1-0.

In a tense final between Shijukara Club and Hyogo SC, it was the Tokyo side who created the first big chance. In the fourth minute, HIRAI Tomoyuki connected with a cross delivered from the left side to strike a header, but his attempt went wide of the target. Hyogo on the other hand, collected the ball to their two forwards, OKAGAKI Masato and KIM Yeong-cheon, to create opportunities. In the 10th minute, Kim responded to the deflection of his own shot to send a cross towards the goal, which set up the shot of Okagaki, but his shot failed to capture the goal. 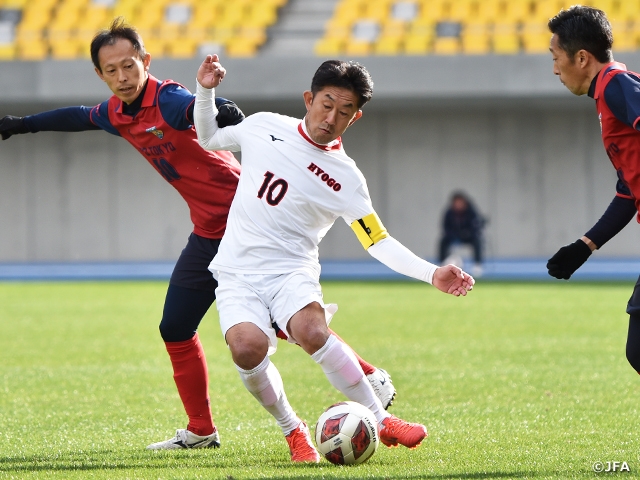 Shijukara Club, who had already made changes in the first half, introduced SHIRANE Motohiro in the lone striker position to start of the second half, which turned out to be a fruitful change. In the 11th minute of the second half, Shirane broke loose into the box and drew a foul to give his side a PK. Although the spot kick was denied by Hyogo’s goalkeeper NAGAO Mitsuhiro, YANAI Yoshinaka was there to convert the deflection to give the Tokyo side a 1-0 lead. In efforts to equalise the match, Kim made a run to exploit the space behind the Shijukara defence, but goalkeeper KOJIMA Tetsuro made a fine save to deny this attempt. After holding onto their one goal lead, Shijukara Club Tokyo 50 was crowned as national champions for the first time. 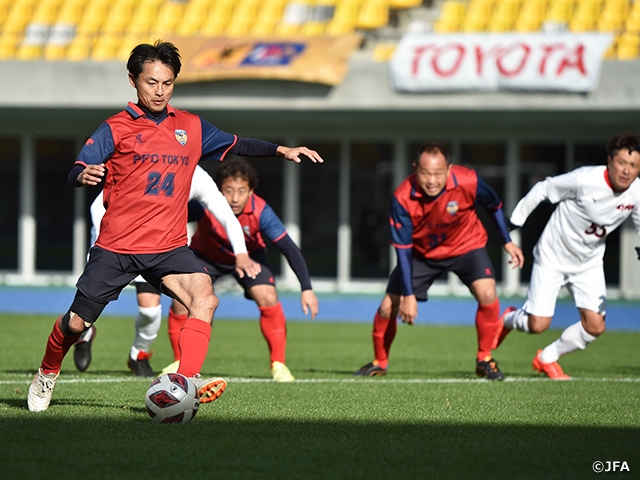 ISE Masashi, Coach (Shijukara Club Tokyo 50)
I'm glad that we were able to win the title without giving up any goals, all the way back from the Tokyo preliminary round to the Kanto round and here at the finals. We don’t have particularly good players, but we continued to focus on applying pressure from the frontline and delivering the ball quickly to our attackers. Our next goal is to defend the title. It will be hard just to win through the Tokyo qualifying round, where there are 60 teams, but we hope to come back to this place again.

SHIRANE Motohiro (Shijukara Club Tokyo 50)
In the scene where I won the PK, I was determined to face the goalkeeper one-on-one. I have been used as a late substitute in our recent matches, so I am glad that I was able to play long minutes in the final. Throughout this tournament, we have started the younger players and used the older players in the second half, so everyone on the bench was highly motivated. Starting from tomorrow, our goal is to win the title of Tokyo Senior Soccer League. We will continue to make our challenge and strive to defend our title next year.

NAGAE Kazutomi, Player-Coach (Hyogo SC)
After winning through a tough group, we tried to ride the momentum to win the title. It was a disappointing result, but everyone did their best. We have reached our goal of competing in the national tournament within a year since starting the team, so we will try to get our revenge next year. This year was a tough year due to the pandemic, but I continued to play for the love of the game. Along with our O-40 team, who also participated in this year’s national tournament, we hope to win the title next year.

ISHII Seishi, Coach (Kumamoto Higo Senior)
In the semi-finals, our game plan was to conserve our energy for the second half, so it is regretful that we conceded just before halftime. However, I'm proud of the players for not give up and worked hard until the end. We were able to make it to the final round in our first year after renewing the squad, which I consider as a great achievement. The players showed great teamwork throughout the pandemic, and although the players will gradually change again, we will make the most of today’s experience to build a strong team.