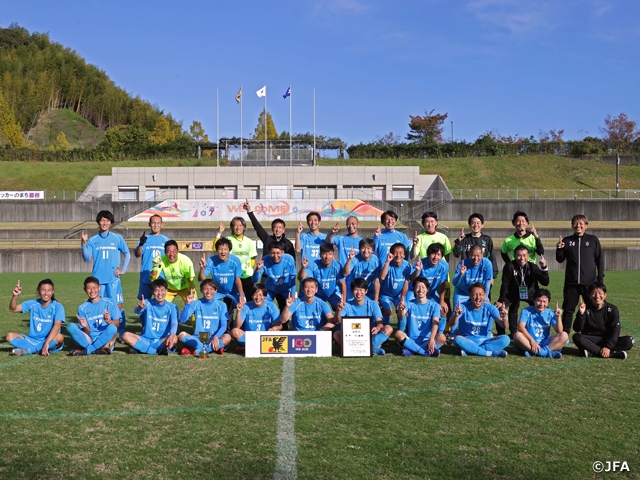 The semi-final match between Fujieda FC (Host/Shizuoka) and FC Funabashi entered the second half tied 0-0. While both sides created opportunities, it was Funabashi who struck first, as YOSHIHARA Takeharu scored the opener in the 11th minute of the second half. Despite the late rally shown by Fujieda, Funabashi managed to keep the clean sheet to walk away with a 1-0 victory. 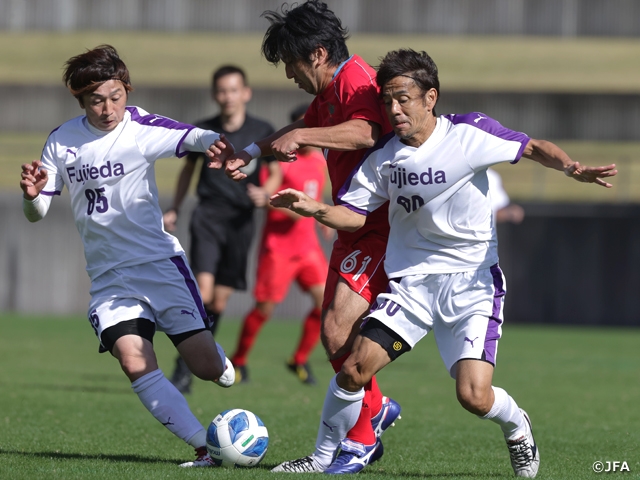 In the other semi-final fixture, Rashinban Club NAGOYA (Tokai/Aichi) started the match by taking the initiative against Tonan Club (Kansai1/Nara). With momentum on their side, Rashinban Club took the lead when SUGIURA Ko scored the opener in the 18th minute. After adding another goal in the second half, Rashinban Club advanced to the final for the first time in three tournaments. 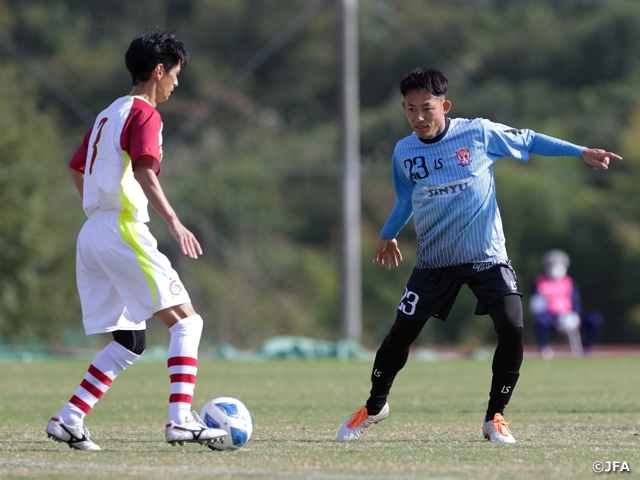 The final kicked-off under a tense atmosphere. Funabashi sought for their opportunities by taking advantage of the height of their striker IMAI Takeshi and through their attacks from the right side. Rashinban Club on the other hand, relied on the speed of their two attackers MIYAZAWA Taiki and KIMURA Yukinobu. The first big opportunity was created by Rashinban Club, when SEGAWA Takashi struck a shot in the 13th minute, but his attempt failed to capture the target. Just a minute later, Miyazawa broke into the penalty area and struck a shot, but his effort was saved by the goalkeeper.

After making three substitutions during halftime, the second half saw Funabashi gain momentum, as they lined up players with speed upfront to create opportunities. However the Chiba side failed to capitalise on their set pieces, allowing Rashinban Club to rally back, as Kimura struck shots in the 40th and 45th minute that threatened the Funabashi goal.

With the second half ending scoreless, the match entered penalty shootout to decide the winner, in which Funabashi prevailed to be crowned as the national champions of the O-40 category. 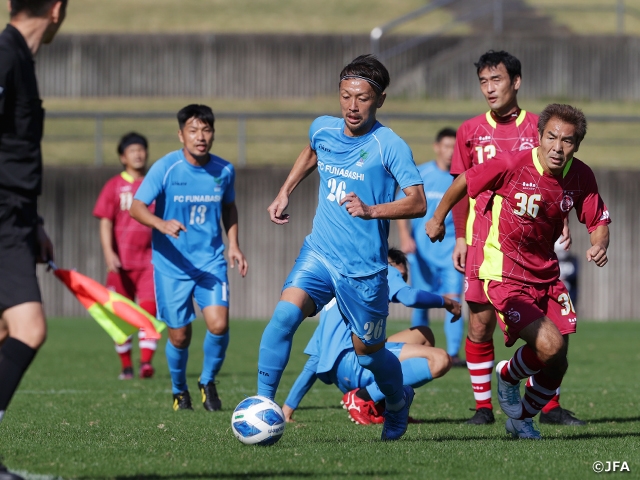 IMAI Takeshi (FC Funabashi)
Three years ago, we competed in this tournament when it was held in our hometown, Chiba, and came in third place. We are ecstatic to win the title this time. We lost our first match in the Kanto preliminary round but managed to win the rest of the matches to finish third and qualify for the national tournament. We were not able to showcase our best performance in our first two matches in this tournament, but we never gave up and fought until the end. I feel like we were able to make the most of our experience at the preliminary round and improve ourselves day by day. I am happy to have won the championship, and I would like to thank the Shizuoka Football Association for preparing this environment where we could play football under the current circumstances.

KASE Takeshi (FC Funabashi)
I think we were able to win the tournament in a typical FC Funabashi fashion. We started the Kanto qualifier with a loss and drew the first two matches in the national tournament as well. However, we were able to play tenaciously and go undefeated after that. We have become a team that doesn’t lose easily. We have players with great skills, but I think there is more to it than just techniques and tactics. It all comes down to who wants it more, so I knew that if the match turned out like the final, we would prevail at the end. We were in the defensive end for a while, but we managed to endure the attacks, and that is the FC Funabashi way of winning matches. We will once again start over from the qualifiers, but we hope to stick with our style to make another deep run.

KAWAMURA Yoji (Rashinban Club NAGOYA)
I don't think there was anything wrong with how we played, but if we were more critical at the final third, the result would have been different. We have the tendency of becoming more competitive in the national stage, but we didn’t have what it takes to get over that final obstacle. This bitterness can only be repaid at the national tournament. There will be new players joining the team, which brings more competition. We will continue to compete and work hard to come back to this stage as the representative of Aichi and the Tokai region.

MAKITA Dai (Fujieda FC)
In the past few years, we have gained the confidence to compete for the championship, but we are very disappointed with the lack of results. If we could play with a little more intensity, I think the result would have been different. We have been working on the same thing over and over to perfect the Fujieda football. Since our goal is to “go beyond senior football,” we have decided not to use the senior rules, which allow players to sub-out and renter as often as they want. We are still work in progress as a team, so I don’t want to say anything definitive, but we hope to stick with our own style and try to win the national title.