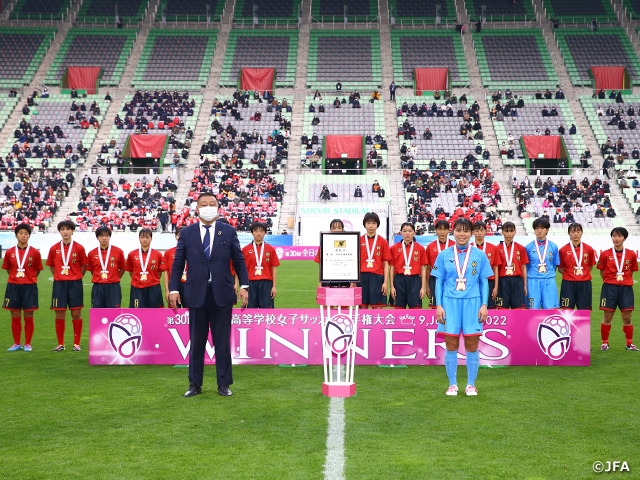 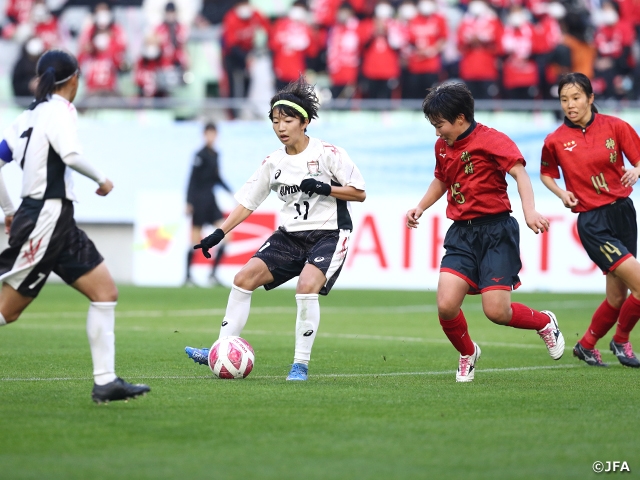 Kamimura Gakuen's centre back IDEGUCHI Rio was injured midway through the first half, but the team managed to cope with the situation flexibly with versatile players filling in different positions. In efforts to change the dynamics of the match, Hinomoto Gakuen also made two substitutions in the second half, but it was Kamimura Gakuen who made the most of their substitutions. INADA Hina, who replaced Ideguchi and played up front, made a charge down the right flank in the 65th minute. Once winning the ball, Inada struck a powerful shot that pierced the upper left corner of the goal, as she later reflected, “As soon as I won the ball, I was determined to score a goal.”

Despite falling behind, the players of Hinomoto Gakuen did not look fazed. MINOWA Chisato, who shifted her position towards the centre, created back to back opportunities in the 76th and 78th minute. Led by their captain, the Hinomoto eleven made tenacious efforts to chase the ball, but it was once again Kamimura Gakuen who scored the next goal. After winning the ball from their high pressure, the Kagoshima side made a quick transition to initiate a counterattack, in which AIKAWA Haruna broke through from the midfield to score the second goal. With MITOMI Ririka scoring the third goal in the closing minutes, Kamimura Gakuen sealed the match to claim their second national title of the season. 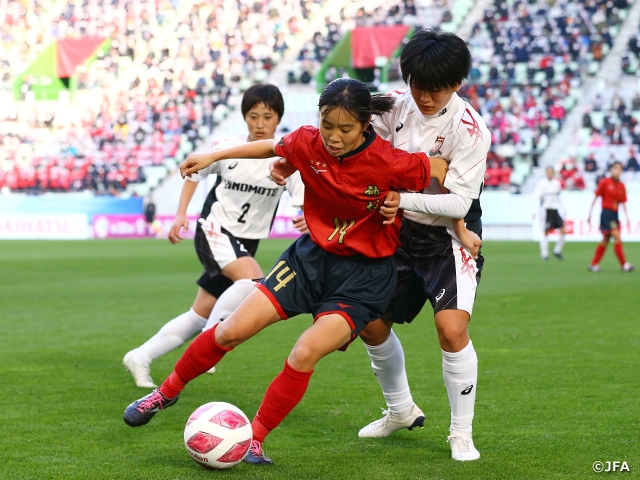 MURAKAMI Yuko, Coach (Hinomoto Gakuen High School)
With the competition being held at our hometown, we were happy to reach the final, but we also really wanted to win. We tried to make adjustments at half time, but we were overwhelmed by the opponents' aggressive pressure, the accuracy of their passes, and their ability to win the one-on-one battles. We had our chances to score, and it really taught us the importance of a single goal. The third year players have shown a lot of growth and the first and second year players have learned a lot from them. I have enjoyed watching the hard work of the third year players all year.

MINOWA Chisato (Hinomoto Gakuen High School)
Our opponents showed great persistence in defence, which highlighted our lack of quality in the attacking third. I was very disappointed that we didn't win, but I felt that we had come this far because of everyone on the team, so I went around thanking everyone right after the match. I wanted to say thank you to everyone for their hard work and for getting us this far, so I didn't cry. 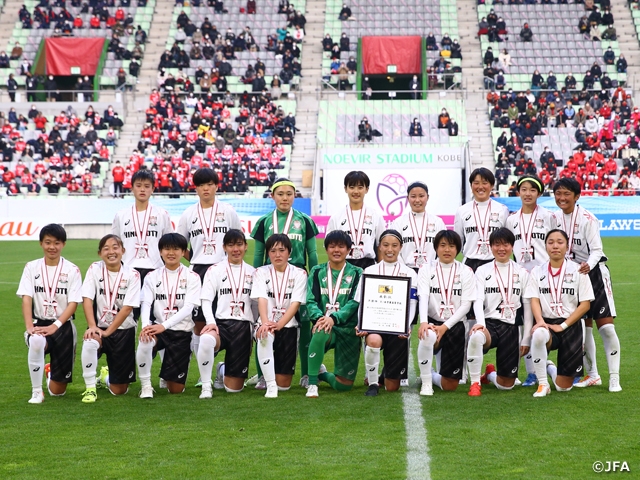 TERASHI Yuta, Coach (Kamimura Gakuen High School )
I feel that we have played against the best possible opponent in the best possible environment, which brought out the best in us. I have mentioned before the match that we can't win by scoring just one goal but scoring three goals is a bit too good to be true. I would like to say thank you to all the players for their hard work. As in the Inter-High School Championships, the goal was not to win the title, but to give our all in each match. The players did very well in the nine matches played on the national stage, four in the summer and five in the winter.

AIKAWA Haruna (Kamimura Gakuen High School )
Having lost in the final two years ago, I knew that it meant nothing if we lost in the end. We showed what we have been working on all year, playing attacking football while also defending well, and I am very happy that we were able to prove that we were on the right track. I was determined to take the first and second year players to Noevir Stadium. I'm satisfied that I've given them a place where they feel they have to come back to. Before the match I was just hoping to finish the season with a smile, but I am happy to have won two titles to finish my high school career.