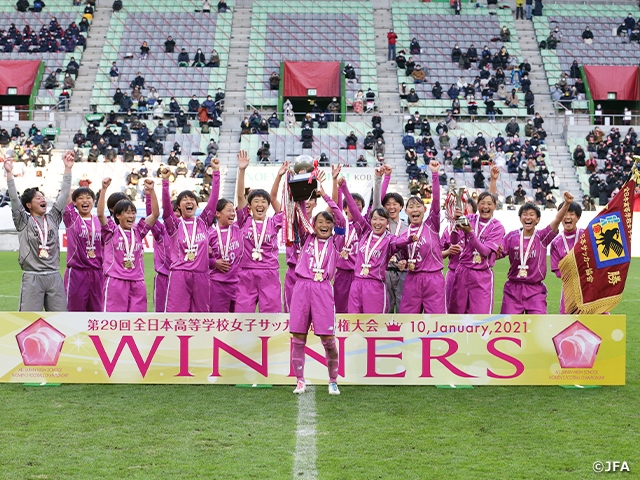 The match kicked off with the defending champion Fujieda Junshin applying aggressive pressure from their frontline. Sakuyo High School (Chugoku1/Okayama) on the other hand, initiated attacks through build-up plays from their own territory. Despite struggling to evade the pressure of Fujieda Junshin, Sakuyo’s ISE Satsuki showcased great individual efforts to create opportunities. The Okayama side came close to scoring the opening goal in the 21st minute, when they won back to back CKs, but fell short from converting the opportunity.

Fujieda Junshin also had their opportunity from a set-piece, when SAITO Hana connected with a CK in the 28th minute, but her header was blocked by the opposing DF and ricocheted off the crossbar. The Shizuoka side had another chance in the 32nd minute, as the CK delivered by HORIUCHI Kokoro drifted over the head of the Sakuyo GK, but the ball was once again denied by the crossbar. 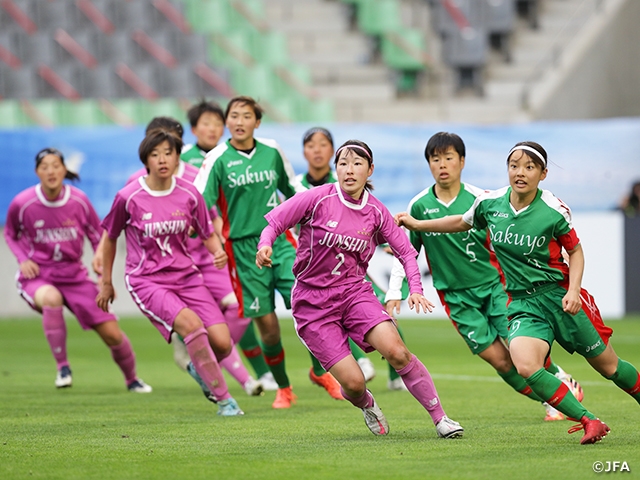 After seeing close opportunities created from CKs at both ends, the opening goal came from the first CK of the second half. Fujieda Junshin’s Horiuchi played a short CK and delivered a cross from a return pass, finding MADOIWA Hina in the mix, who sent the ball into the net with a header.

Gaining momentum from the opening goal, Fujieda Junshin increased their pressure upfront. In the 52nd minute, Saito responded to a long feed and broke into the box, before slotting the ball into the net to extend their lead. Fujieda Junshin’s third goal came in the 63rd minute, when IDE Hinata intercepted a pass near the halfway line, and delivered a long pass towards the left flank. TAKAO Marina was on the receiving end of this pass, as she dribbled past the opposing DF and superbly curled the ball into the far side, giving the defending champion a commanding lead.

Down by three goals, Sakuyo changed their formation in efforts to rally back. In the 73rd minute, HONDA Mikako, who was shifted into a fullback position, carried the ball upfront and struck back to back shots. Their striker, IDEDAN Chinari also tried her luck in the 85th minute, but her shot was denied by the goal post.

With a comfortable lead, Fujieda Junshin managed to keep a clean sheet to claim their fifth overall title. The Shizuoka side won back-to-back titles for the first time in school history, as they showcased a dominating performance, conceding zero goals to accomplish this great feat. 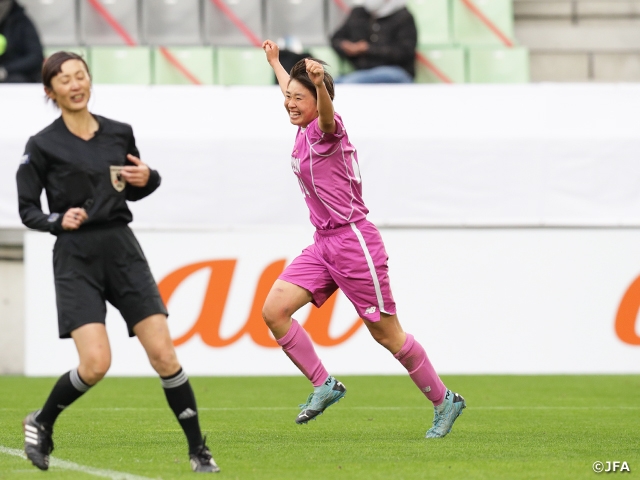 TATARA Kazuyuki, Coach (Fujieda Junshin High School)
Entering this tournament, I wasn’t so sure if our team was capable of defending the title, but the players showed great improvements throughout the tournament. We doubted ourselves after losing to Tokoha University Tachibana High School at the Tokai regionals, but I told my players that we are going back to the basics and fight with our high pressure and counter-press, which turned out to be very effective at this tournament. Compared to our past teams, we may not have the same type of individual talents, but this team showed great teamwork to win the title. Winning the title three years in a row is not an easy task, but we will strive to defend our title once again next season.

YANASE Funa (Fujieda Junshin High School)
It was great that we were able to accomplish something our school have never done before. We wanted to make this a perfect win, so we were eager to keep the clean sheet as well. Our activities were limited due to the effects of COVID-19, but we always kept communicating with each other and stayed vocal on the pitch. We heard everyone talking in today’s match, and it really gave a sense of unity. Fujieda Junshin has evolved through the years, and I hope our junior players will pass on that tradition to keep the forward progress going. 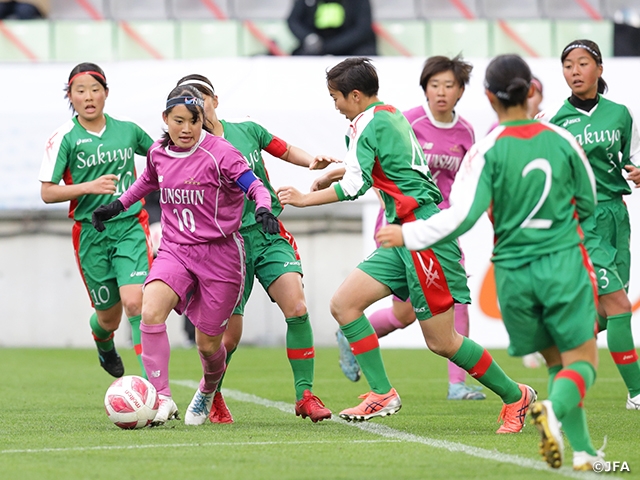 IKEDA Hiroko, Coach (Sakuyo High School)
We played through close matches from the first round but managed to ride the momentum to reach the final. We made sure to go over our defensive shapes during halftime but conceded from an early CK in the second half, which really caused us to lose our patience. Our opponent showcased their superiority over us, and although it is disappointing, we must accept the result and move on. Despite the pandemic, the players worked extremely hard this year, which allowed us to enter this tournament with great confidence, so I am very proud of my players.

OKAMOTO Ako (Sakuyo High School)
Facing an opponent who has won the tournament multiple times, we knew this was going to be a tough match, so the first half went as we expected. Despite facing a difficult opponent, we kept trying to showcase our usual football style where we initiate our attacks through build-up plays. Over the last three years, our team rarely got past the first round, but this year, we were able to strengthen the team’s bond as we made a deep run. We are not satisfied with this second place finish, but looking back on our way to this point, we have no regrets. I hope the junior players will continue to pass on the never give up spirit of Sakuyo and strive to win the title next year. 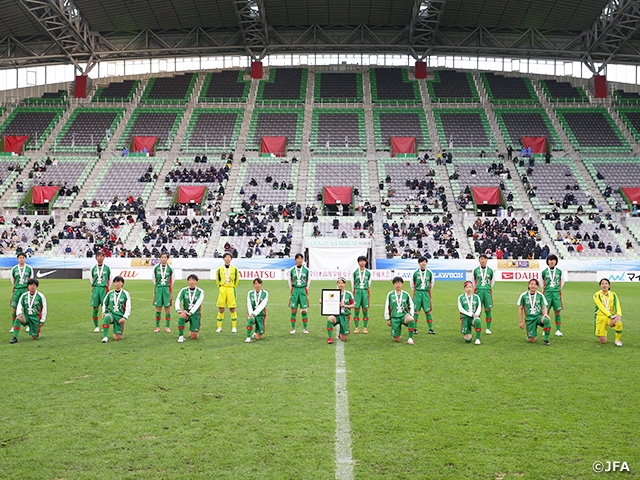