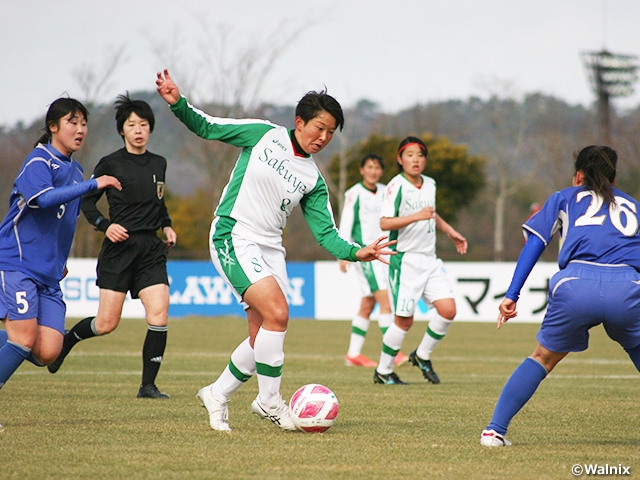 The 29th All Japan High School Women's Football Championship kicked off on Sunday 3 January, as 16 first round fixtures were played.

At Miki Sogo Bosai Park Athletic Field, Tokoha University Tachibana High School (Tokai1/Shizuoka) squared off against Sakuyo High School (Chugoku1/Okayama). The match between two top regional seeds saw an intense battle from the early minutes. While Sakuyo fluently shifted their positions to keep the ball moving, Tokoha kept their attacks simple, as they emphasised on their defence to initiate counterattacks, collecting the ball to SAKAKIBARA Kotono and NAWA Marina whenever they won the ball. The opening goal came in the 12th minute, when Tokoha forced a turnover in the Sakuyo territory. Noticing that the opposing GK was out of her position, Nawa struck a shot from 30 metres out, scoring a brilliant shot to give Tokoha an early lead.

The two sides took distinctive approach in the second half, as Sakuyo deployed more numbers to apply pressure upfront, while Tokoha parked the bus to anticipate for their chances to initiate counterattacks. As the match progressed, Sakuyo added more layers to their offence, taking more and more shots to threaten the Tokoha goal. Their persistent attacks were finally paid off in the 80th minute, when they struck consecutive shots from the left side, which allowed their DF MORI Soran to convert a loose ball to level the match. With the equaliser giving them momentum, the Okayama side went onto win the PK shootouts to advance to the second round. 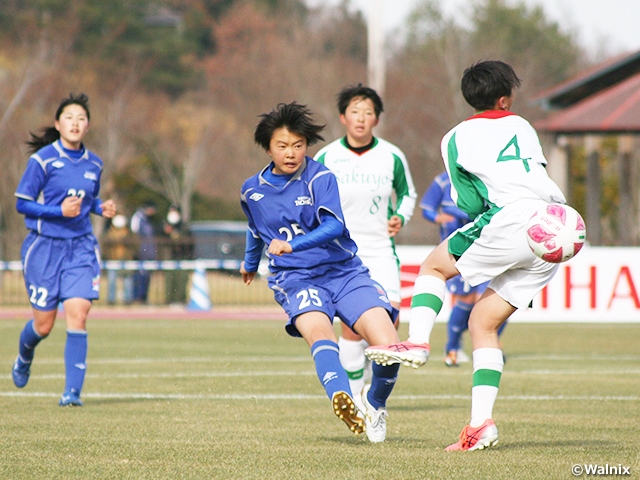 The second fixture played at Miki Sogo Bosai Park Athletic Field featured Seisa Kokusai High School Shonan (Kanto4/Kanagawa), who won the title two years ago, and Osaka Toin High School (Kansai3/Osaka). The match saw Seisa Kokusai showing great aggression in offence, as they collected the ball to MATSUO Mizuki, who played in the tournament final two years ago. Osaka Toin on the other hand, displayed great transition between offence and defence to keep the Kanagawa side at bay, limiting their offence to just two shots in the first half.

A close opportunity was created for Osaka Toin in the early minutes of the second half, as the shot taken by TAKIGUCHI Airi was heading towards the goal but blocked by an opposing defender. Seisa Kokusai also created chances, as they effectively utilised the width of the field to penetrate the open space. Although the two sides struggled to score a goal, the deadlock was broken by Seisa Kokusai with just two minutes left on the clock, as NAGAYAMA Moka capitalised a loose ball following a goalmouth scramble. The Kanagawa side went onto add another goal during additional time, as MORI Mirea converted a CK to seal the match, sending Seisa Kokusai to the second round. 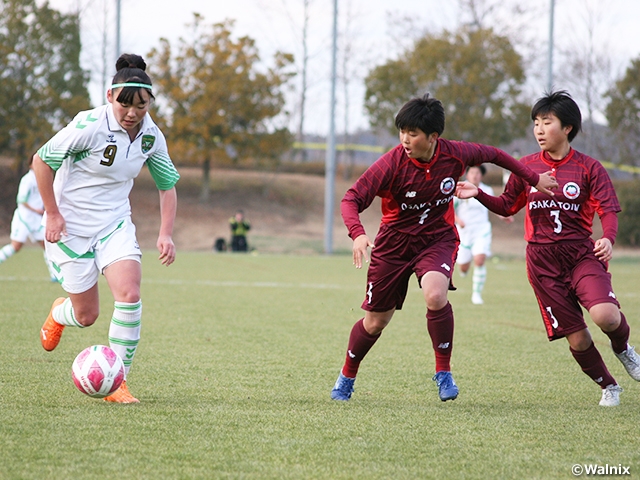 IKEDA Hiroko, Coach (Sakuyo High School)
We wanted to really in the second half, so we positioned our attacking players in the flanks to create attacking points on both sides. It must have been tough for the opponent to defend against our offence. We managed to add layers to our offence in the final 10 minutes, which led to this result. With this being the final tournament of the school year, we are highly motivated to enter this tournament each year, but we are grateful more than ever to be able to play football this year. After winning against a strong opponent like this, it gives us more reasons to win the title this year.

HANDA Etsuko, Coach (Tokoha University Tachibana High School)
Our team played well to take the lead, but we lost the match because of my strategical mistake and I feel terribly sorry for that. We prepared ourselves well to defend against our opponent and we managed to take control in the first half. Our players played tenaciously to defend the goal, but we couldn’t keep our focus for the entire match. This match really showed us what its like to play at the national stage. With the ongoing pandemic, we took every measure to avoid the risks of being infected and worried if this tournament was going to take place or not. Despite losing the match, we feel very grateful to be given the opportunity to play in this tournament.

KARASAWA Shunsuke, Coach (Seisa Kokusai High School Shonan)
Although we struggled, there were no upsets in this match result. The pitch condition might have had an effect on our technical mistakes, but we need the mental toughness to overcome those errors. Our players have played matches without putting much thoughts to them, so I hope they can set a higher standard. Today’s performance was about 60% of what I expected, but we started off slow in the tournament we won two years ago, so we hope to showcase a better performance in our next match.

YASUDA Maki, Coach (Osaka Toin High School)
We made effective adjustments against our opponent’s unorthodox system and gave them a hard time. Our overall performance was not too bad, but we failed to convert our chances, as our inability to score goals has been an issue throughout the season. The players were crying after the match, but I am sure they don’t have any regrets. Our team captain stayed vocal to lead the defence until the end and many players made great runs upfront. The senior players did a great job to lead the team to the national stage, and I hope the first and second graders will make the most of this experience.