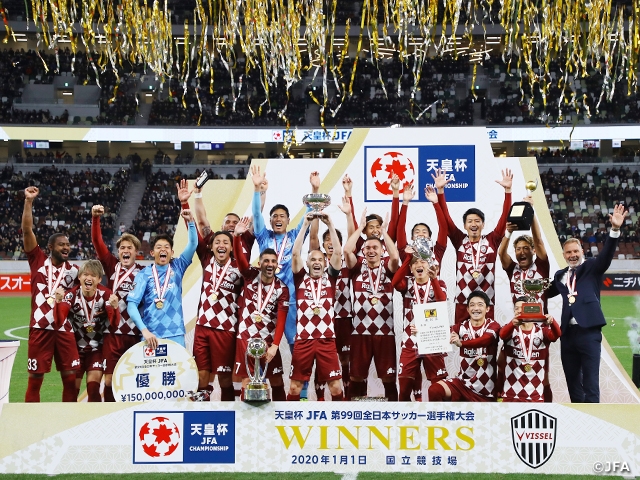 The match started with both teams testing the waters, but with Andres INIESTA orchestrating their offence, it was the Kobe side who gradually picked up their pace to take the initiative. The opening goal came in the 18th minute, when Kobe’s Lukas PODOLSKI penetrated the Kashima penalty area from the left side. The shot taken by the German striker was parried by goalkeeper KWOUN Sun Tae, but the deflection bounced off a Kashima defender and shook the net. 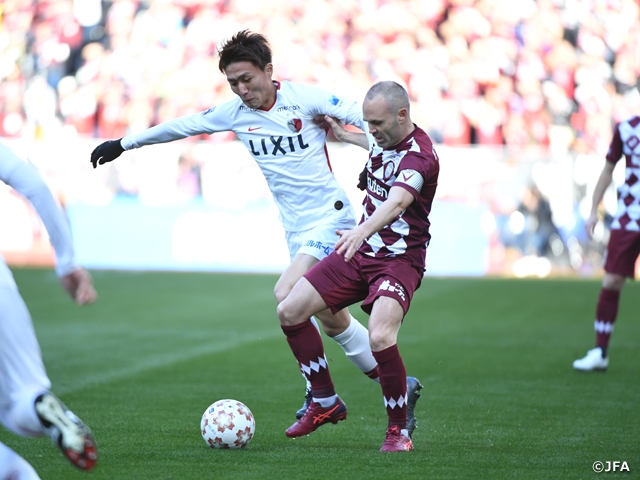 Kobe managed to double their lead in the 38th minute, when a fast driven cross sent by NISHI Daigo induced a clearance mistake by a Kashima defender. With the deflection rolling towards the Kashima goal, FUJIMOTO Noriaki converted the loose ball to give Kobe a 2-0 lead before halftime. 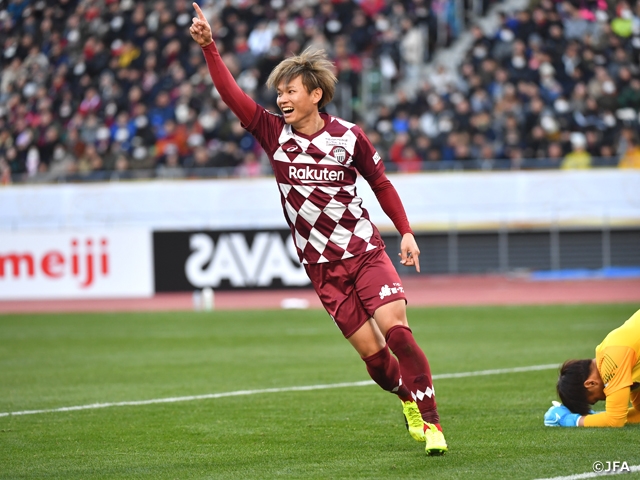 Despite the efforts made by Kashima to rally back in the second half, Kobe showcased their persistency to keep the two goal lead intact. In the closing minutes of the match, David VILLA, who has announced his retirement following this season, was introduced to the game as a late substitution to hear the final whistle on the pitch.

Thorsten FINK, Coach (Vissel Kobe)
We played very well in the first half. We were able to execute our game plan and managed to score goals in the early minutes. After switching our system to a three-back formation in the second half, we saw many issues and started to play too defensively. However, we still managed to create opportunities and win the match 2-0. I am very satisfied with this result. This club has been around for 25 years and I am very proud that we were able to win the first title for this club. With this being the first official match at the New National Stadium, I will never forget this historic moment.

Andres INIESTA (Vissel Kobe)
This has become a special day for the players, club, and the people of Kobe. We worked hard all year for this title, so I am very happy. The team’s development was an essential factor to win the title and this will provide a major turning point for this club. We will celebrate this victory for now, but we must reset our mindsets ahead of the next season and have new motivations to strengthen the team. We must first become a top tier team at the J.League. As long as we can earn positive results at the J.League, our performance at the Cup competitions and the AFC Champions League shall also improve.

OIWA Go, Coach (Kashima Antlers)
This is a very disappointing result, but I told my players that I am grateful for their efforts and I am very proud of their performance. We struggled dearly in the first half and it literally determined the outcome of this match. Although we managed to showcase some good offence in the second half, we weren’t able to come from behind to win the match. I have always dealt with the pressure and responsibility that comes with the manager of a big club like the Kashima Antlers. Through the highs and lows of this club, I have gained great confidence as a coach. I will now step down from the coaching position, but I am hoping to utilise this experience in my future path.

NAGAKI Ryota (Kashima Antlers)
We allowed our opponent to play freely and couldn’t showcase our usual football. Although we manged to improve our performance in the second half, we fell short from levelling the match. I am feeling very disappointed. We trained hard for this match and entered the match with a strong intention to win, but our opponent was simply the stronger team today. Now that we ended this season with no titles, each player must recognise their responsibilities and work hard towards the next season.