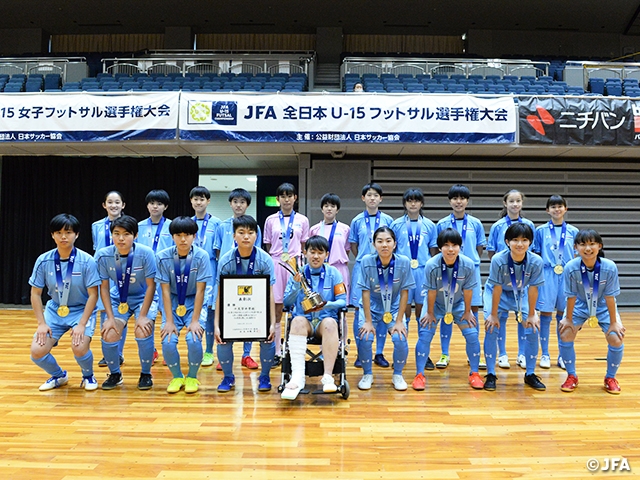 The semi-finals and final of the JFA 12th U-15 Japan Women's Futsal Championship took place on Monday 10 January. In the final, Jumonji Junior High School (Kanto/Tokyo) defeated AIC Seagull Hiroshima Ladies (Chugoku/Hiroshima) to claim their fourth overall title, which was their second in three years.

Jumonji Junior High faced Kyoto Seika Gakuen Junior High School (Kansai/Kyoto), who reached the top four as the wildcard, in the first semi-finals. With the competition entering the knockout stage, both teams carefully tested the waters to start the match. It was Jumonji Junior High who took the initiative in the first period, but the Tokyo side fell short from converting their opportunities. Kyoto Seika Gakuen started to pickup their pace in the second period, but they too fell short from breaking the deadlock, as the match entered penalty shootout, in which Jumonji Junior High came out on top to advance to the final.

AIC Seagull Hiroshima, who have finished third in the last three tournaments in a row, faced NGU Loveledge Nagoya Statice (Tokai/Aichi) in hopes of reaching the final for the first time. Although it was AIC Seagull Hiroshima who dominated the ball possession, Loveledge took a two goal lead with the brace of FUJIWARA Rion, who scored back to back goals from a counterattack and set-piece. Despite facing an uphill battle, AIC Seagull Hiroshima rallied back with the hat-trick of KISHINAMI Mikoto, and four goals scored by ITAMURA Mao, winning the match 7-3. 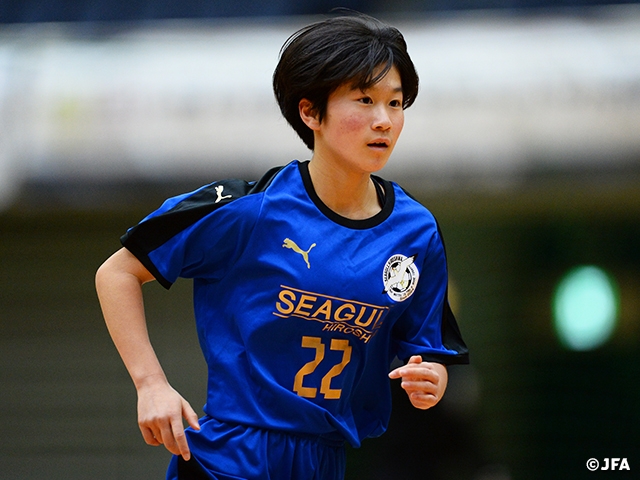 The final started with Jumonji Junior High, who were kept scoreless in the semi-final, taking the initiative. After ITO Meisa scored the opener in the fifth minute, KIJIMA Riko converted a chance from a corner kick in the seventh minute to give Jumonji Junior High an early two goal lead. MATSUO Miku added to the tally at the start of the second period to further extend the lead for the Tokyo side.

However, AIC Seagull Hiroshima rallied back from the 15th minute, starting with the goal scored by Itamura. It was Kishinami who scored the next two goals in the 16th and 17th minutes to equalise the match, as the Hiroshima side got back on equal terms in just three minutes.

Alhtough it seemed like the momentum had completely shifted towards AIC Seagull Hiroshima, Jumonji Junior High showcased their resilience to retake the lead with the goal scored by NAKAYAMA Yuika in the 19th minute, followed by an insurance goal scored by Kijima in the 21st minute. Leading by two goals again, Jumonji Junior High fended off the late surge of AIC Seagull Hiroshima to claim a 5-3 victory, winning their fourth national title, which was their second title in three years.

OTAKI Osamu, Coach (Jumonji Junior High School)
Our second set really stepped up their game this year. In the past, we were only able to form a set plus one or two players, but this year we had enough talents to form two sets. The players encouraged each other even when making mistakes, which was something we had been doing all year as a team. Our captain (MATSUO Miku) had the ability to create such vibe, so her presence was one of our strong points. We will continue to do our best to return to this stage next year.

FP #13 MATSUO Miku (Jumonji Junior High School)
We won the title during my first year of junior high school, but I was a little bitter because I only played for about 30 seconds. In my second year, the team lost at the Tokyo qualifier because of my mistake. As a senior player and as the team captain, I really wanted to lead the team to reclaim the title, so I am very happy with this result. We allowed our opponent to come from behind at the final of the Tokyo qualifier, so we were committed to keeping our focus even when we had the lead. Our opponent at the final was a team with a lot of come-from-behind victories, but we believed in ourselves that we could win the match as long as we showcase what we had been working all year. 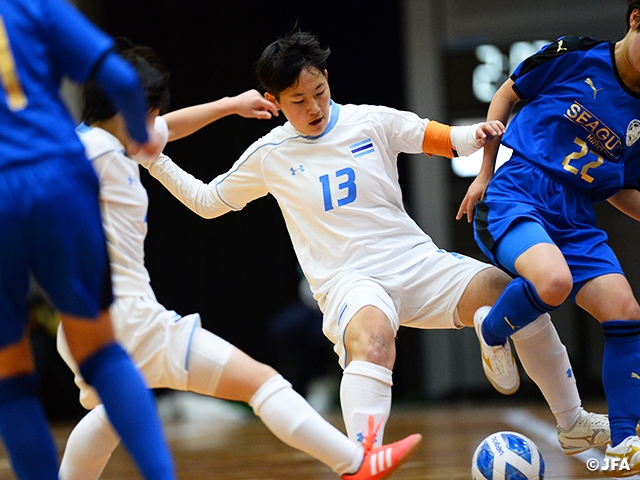 FP #22 KISHINAMI Mikoto (AIC Seagull Hiroshima Ladies)
We wanted to show everything we had worked for the past three years and win the championship so that we would leave no regrets. We have conceded the opener in many of our matches, so I wanted to score a goal to get the team going. The fact that I was able to score many goals in this tournament gave me a lot of confidence. I am not the best striker, but I was determined to score goals, which helped me gain good results. I will continue to work hard so that I can become a player that can contribute to the team’s victory in high school.

FP #7 OKUDA Raimu (Kyoto Seika Gakuen Junior High School)
Our goal was to win the national championship, so we were disappointed to come in third, but we had a lot of fun. We worked hard in defence, and we were able to demonstrate what we have been working on and we are happy to have reached the final round. We were not able to capitalise on our opportunities in the semi-finals. The persistency in defence and the ability to score goals in offence, are both important qualities in football, so I would like to make the most of this experience in my future football career.