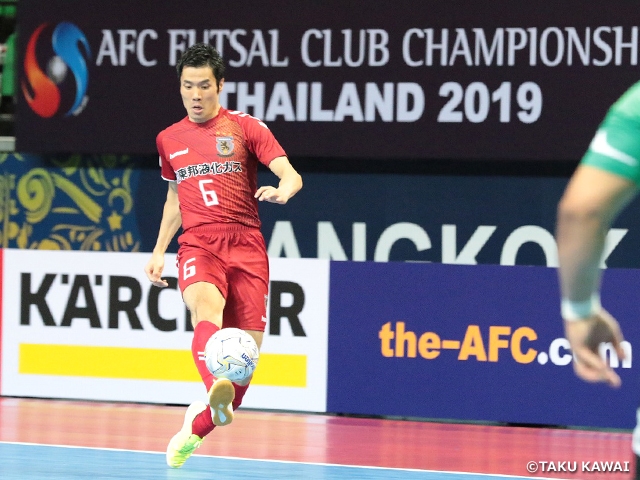 The championship kicked off its action on Wednesday 7, where Thai Son Nam (Vietnam) was among the teams who earned a win on the opening day. A member of the Japan Futsal National Team, SHIMIZU Kazuya, who is on a loan with the Vietnam side, scored a goal and led the offence of Thai Son Nam to garner himself immense praise from the local media.

The first match for the F. League champions was scheduled on the second day of the tournament, Thursday 8, as Nagoya Oceans faced the UAE side, Al Dhafra Sports & Cultural Club. With the Nagoya side making their eighth appearance at the AFC Futsal Club Championship, the team entered the tournament with their eyes set on their fourth overall title.

Despite Nagoya’s efforts to take the initiative of the match, it was the UAE side who scored the opening goal. In the fourth minute, former Japan Futsal National Team member HATAKEYAMA Bruno Takashi capitalised on a goalmouth-scramble to give Al Dhafra a 1-0 lead. In efforts to level the match, Nagoya continued to take control of the ball possession, but struggled to break through the opposing defence. Conversely, Nagoya showed flaws in their approach to apply pressure and gave up opportunities to their opponents in several occasions.

Although the match almost turned into a difficult game for Nagoya, they soon turned around the momentum to take control of the match. In the 15th minute, HOSHI Shota scored a goal off a corner kick to equalise the match, which gave back Nagoya their composure to dominate the opponent. With five seconds remaining on the clock, HASHIMOTO Masaya scored the go-ahead goal from a set-play to give Nagoya the lead at halftime. 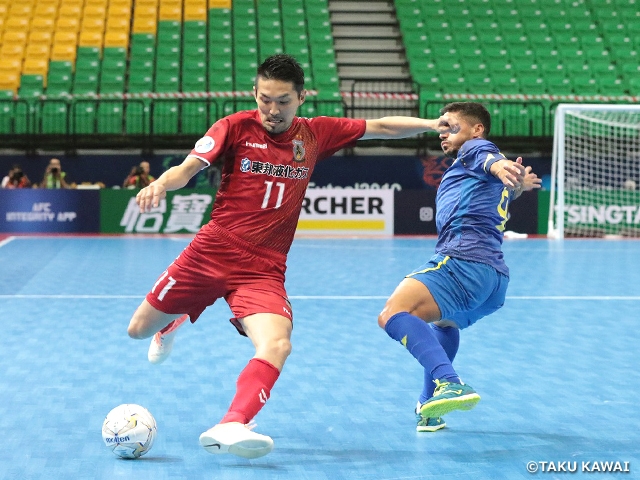 Nagoya continued to show their dominance in the second half, as NISHITANI Ryosuke scored a goal in the seventh minute of the half to double the lead. With Al Dhafra showing signs of fatigue, the Japanese side attacked fiercely to take advantage of the situation.

It was MIZUTANI Soma who scored the team’s fourth goal in the 17th minute of the second half, sealing the match for Nagoya. Despite conceding a goal from the opponent’s powerplay in the closing minutes, Nagoya earned a come from behind victory in their first match of the tournament with a final score of 4-2. 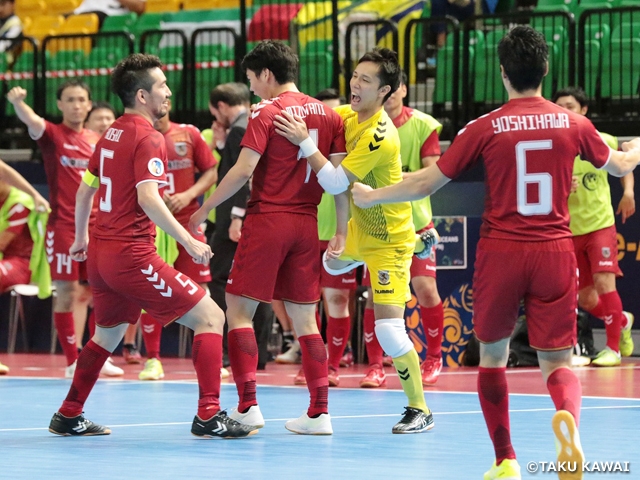 FUENTES, Coach (Nagoya Oceans)
We were able to earn three points in our tournament opener. It was a very difficult and tough match. By conceding the first goal to the opponent, we made it difficult on ourselves. However, we managed to make the adjustments during the match and gradually take control of the game. I am very happy that we were able to come from behind to win the match. We will prepare ourselves well ahead of our next match.

FP #10 HASHIMOTO Masaya (Nagoya Oceans)
We were able to win the first match of the tournament, which is a critical match for us. Prior to this match, I was side-lined with an injury, but I was able to score a goal today. This goal was scored by everyone who has supported me while I was injured. I will prepare myself well ahead of our next match. Lastly, I would like to thank everyone who has supported us at the match site and those who are supporting us from Japan. Thank you very much.

FP #11 HOSHI Shota (Nagoya Oceans)
After conceding the opener, we looked stiff in the early minutes of the match. However, we still had our set-plays to change the dynamics of the match, and we managed to take advantage of the set-plays to score goals. For three of our players, this was their first AFC Futsal Club Championship, but we still managed to find our rhythms and take control of the game through our defence.

HATAKEYAMA Bruno Takashi (Al Dhafra FC)
Nagoya Oceans is a very strong opponent, and they are used to playing this tournament. Between the two sides, Nagoya was the superior side by far and we weren’t sure if we can put up an even fight against them. That is why we were fully focused to enter the match and that approach helped us score the opening goal. We wanted to maintain that lead, but Nagoya showed their strengths to come from behind. Although we lost the first match of the tournament, we will give our utmost efforts in the remaining two matches to advance through to the final round.