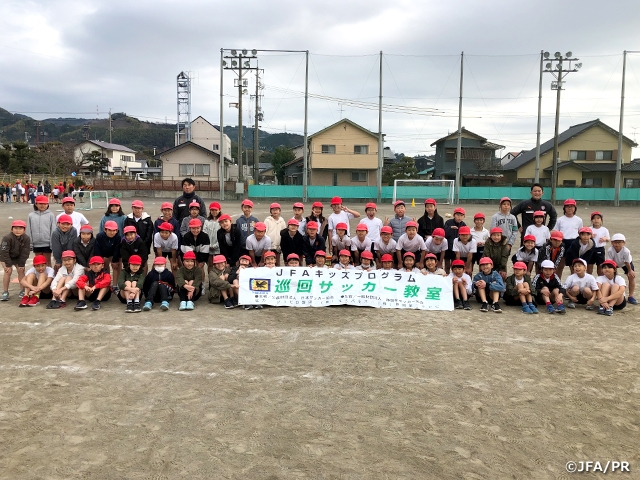 A football class towards fourth grade students was held. The class was conducted under a gloomy weather, but fortunately the weather held up to keep everyone dry. Three coaches joined by a teacher conducted the class where kids went through a lecture, a tag game, drills using the ball, and a scrimmage. Each child was provided with a ball to go through the drills, as they worked on their ball touches and dribbling skills. At the final scrimmage, the boys played against the girls, where the two sides showcased an exciting battle. The kids seemed to enjoy the entire class that lasted 45 minutes.

MORITA Yuji, Staff (FA Traveling Guidance Staff)
The kids showed great energy from the beginning of the class. During the section where we worked on dribbling and juggling skills, we saw experienced kids teaching the unexperienced kids. Many kids struggled to dribble the ball, but as soon as we taught them not to use their toes, they got much better from that point on. We saw many kids challenging to dribble the ball at the final scrimmage.

A total of 265 kids, from first grade to fourth grade students, joined the course. The course was held at the gymnasium, where kids actively participated in tag games and football drills. The kids played in a scrimmage to conclude the course, as they chased the ball with great energy.

SAKAI Ryosuke, Staff (FA Traveling Guidance Staff)
There were kids who have never played football before, but we saw many kids helping their peers as we went through the course. During the drills using the ball, we saw may experienced kids teaching the unexperienced kids how to control the ball. Through football, we saw many kids actively communicating with others and that was even more evident during the scrimmage game we played at the end. 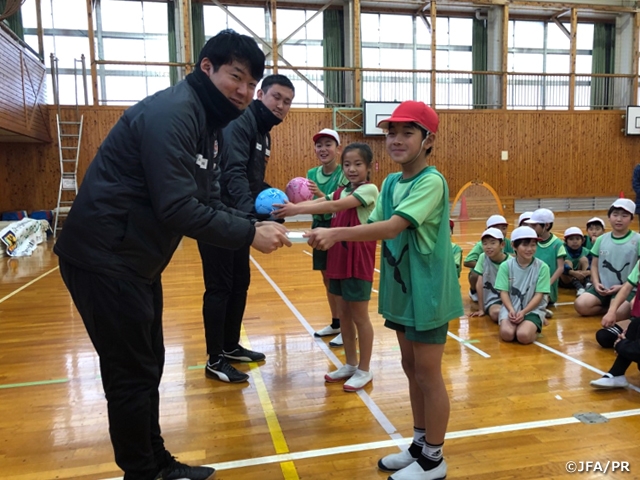 The course was held as a joint course with kids from other neighbouring kindergartens, as we saw a total of 10 kids participating. There were also numbers of parents observing the course, which gave some kids extra motivation to do well on the pitch.

HANTANO Masashi, Staff (FA Traveling Guidance Staff)
Following the rain shower from the day before, we weren’t able to use the playground, but we were still able to conduct the entire programme inside our classroom. The kids displayed great energy to go through the football drills and showed improvements at the scrimmage game held at the end of the programme. The kids were able to work up a sweat and enjoyed playing football.

Teacher/Staff in charge (Kindergarten Principal, Nursery Teacher)
We are thankful for the entertaining programmes provided by the coaches. The positive vibes carried by the coaches allowed the kids to stay motivated and have fun playing football. The kids were given plenty of time to play a scrimmage, which they showed great enthusiasm. The coaches got involved from time to time, so that all the kids can get involved with the ball. 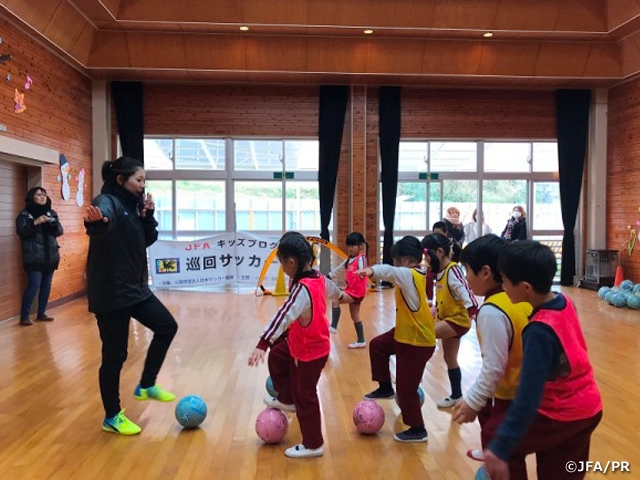