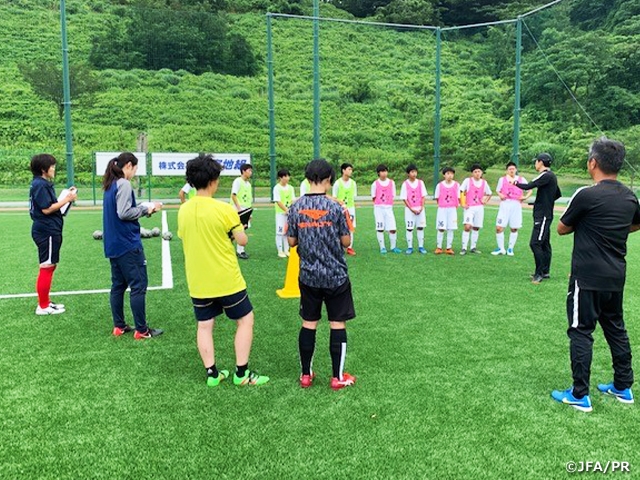 Coaches from various club teams and training centres were seen in the second course of the year, as the participants took lectures on “play analysis and planning” and “coaching methods” following the orientation session held on the first day. The participants then watched a film of the semi-final match played between Japan and Australia at the AFC U-16 Championship Malaysia 2018 and held a group analysis of the match to develop a training menu for their coaching session scheduled on the following day. 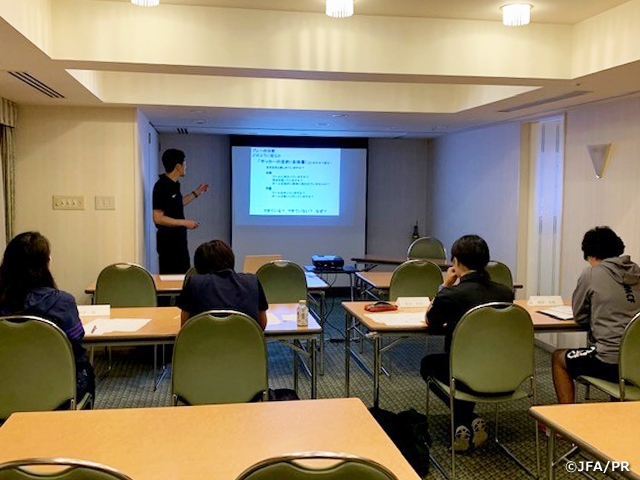 The group spent the entire second day conducting a practical coaching session with the help of the players from the local U-15 club team. After the session, the team reconstructed their training menus based on their observations and held discussions with the instructors and other participants to polish up on their coaching methods. In the evening, the participants listened into the analytical report of the AFC Women's Asian Cup 2018 given by the JFA Technical Study Group before going over the coaching session conducted on this day. The second day concluded as the group reviewed the coaching plans for the following day.

The final day saw the group conduct another coaching session where the session concluded with a scrimmage. 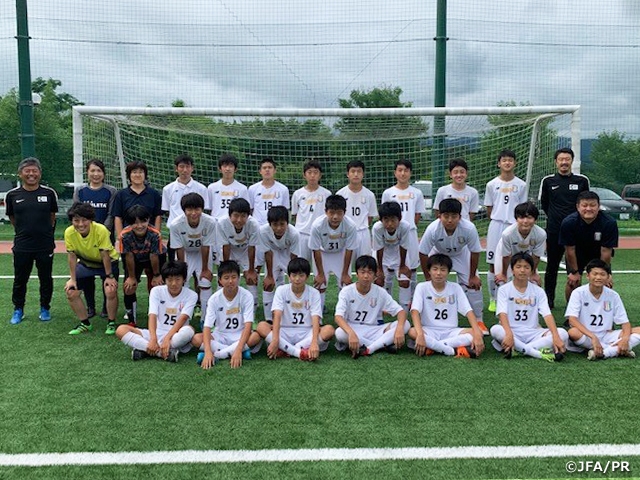 The third (9/6-8 @J-STEP) and fourth (10/11-13@Shiga) refresher courses will also serve as try-out sessions for the Women's Committee to determine the candidates to attend next year’s certified A-Licence General Coaching Course.

KIYOSE Kazutaka, National Training Centre's Coach (Women, Hokushinetsu Chief)
In order to deepen their knowledge on coaching and football, four participants have joined us in this course held in Kanazawa city, Ishikawa. In this refresher course, we held lectures, coaching sessions, and discussions in a tight schedule, where the participants exchanged their opinions and utilised the lectured materials to build their own raining menus. During the coaching sessions, two participants acted out as the coach and the assistant coach to lead the training sessions for the junior high school boys’ team. As we conducted the sessions over and over, the participants showed great improvements by listening to the players opinions and the instructors’ advices. They have displayed great passion through the sessions and showed their deep understandings on the importance of being organised. We hope to see more female coaches excel in this field. I would also like to thank everyone who has supported this course and made it possible to hold this course in Ishikawa. Thank you very much.

Ms. TOHMA Shiho (Ishikawa)
I usually don’t get to hold coaching sessions where I can receive feedbacks, so I was looking forward for this refresher course. The feedbacks I received from the instructors taught me many things. It was a bit disappointing that we didn’t have many participants, which limited the depth of our discussions. I felt like we can further develop the women’s football community by meeting other female coaches and holding discussions with an open mind, and this course has given me a starting point.

Ms. MAKITA Arisa (Nagano)
I was looking forward to learning how to construct training plans and methods to analyse the players’ performances. This course has allowed me to learn just that. The course was only for three days, but with the support of the other participants, I was able to obtain a precious learning experience. I hope to implement the new knowledge to my daily coaching activities.