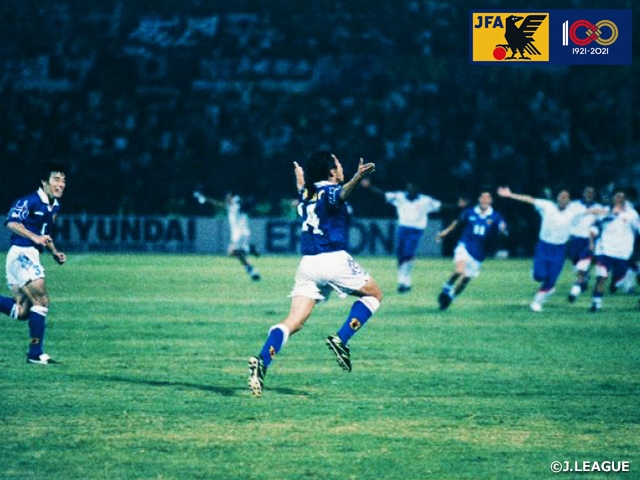 The Japan Football Association (JFA) will celebrate its 100th anniversary on Friday 10 September. To commemorate the 100th anniversary, we will post a countdown column that looks back from the founding in 1921 to the present. The third article was written by football journalist Mr. KUNIYOSHI Yoshihiro about the growth period of Japanese football from around 1990 to the present

The 1990s were a turbulent decade for Japanese football.

The movement of professionalization, which started in the latter half of the 1980s, became more active and soon realised. The passion for reform led by the likes of KAWABUCHI Saburo, who were under the tutelage of Dettmar CRAMER, broke a barrier that could not be broken for more than 20 years.

In February 1991, the 10 inaugural teams were determined. While many corporate teams of the Japan Soccer League (JSL) era made the shift to become professional clubs, there were also clubs taking unique approaches such as Kashima Antlers (former Sumitomo Metal Industries Factory FC) who showed outstanding ideas and execution ability such as building a new stadium and inviting Brazilian superstar ZICO while belonging to the JSL 2nd division, and Shimizu S-Pulse, which was a club newly established in the self-proclaimed “Football town” Shimizu, Shizuoka. In July of the same year, the nickname of the new professional football league was announced as the “J.League,” which left a strong impact to the public.

The final season of the JSL ended in March 1992, and the Yamazaki Nabisco Cup began in September as the first competition of the J.League. And on 15 May 1993, the J.League finally kicked-off. It was a start to a new era for Japanese football. Led by Zico, Kashima won the first stage of the first season. However, the star-studded Verdy Kawasaki (former Yomiuri FC) took the second stage and went onto claim the inaugural season title by defeating Kashima at the J.League Championship. MIURA Kazuyoshi of V. Kawasaki, who turned professional in Brazil before returning to Japan at the start of the J.League, became the man of the hour.

In addition to Zico, many star players from around the world such as Ramon Diaz (Yokohama Marinos, former Nissan), Pierre Littbarski (JEF Ichihara, former Furukawa Electric), and Gary Lineker (Nagoya Grampus Eight, former Toyota) featured the J.League, as they played a major role in the drastic improvements of the players' techniques, physicality, and work ethics.

During the same time, a new wind blew into the development of the Japan National Team. In March 1992, Dutchman Hans OOFT, was appointed as the first foreign coach to lead the Japan National Team. The decision was made based on his successful track record in the JSL with Yamaha (later became Jubilo Iwata) and Mazda (Sanfrecce Hiroshima), and his deep understanding of the Japanese football scenes. Like Cramer, Ooft persisted on working on the fundamentals. In addition to the technical aspects, he reinforced the tactical awareness of individuals, groups, and teams, by focusing on constructing “compact” lines and securing pass courses through a “triangle.” Ooft accurately identified what was lacking in Japanese players, who were getting technically sound to some extent due to the spread of youth football. 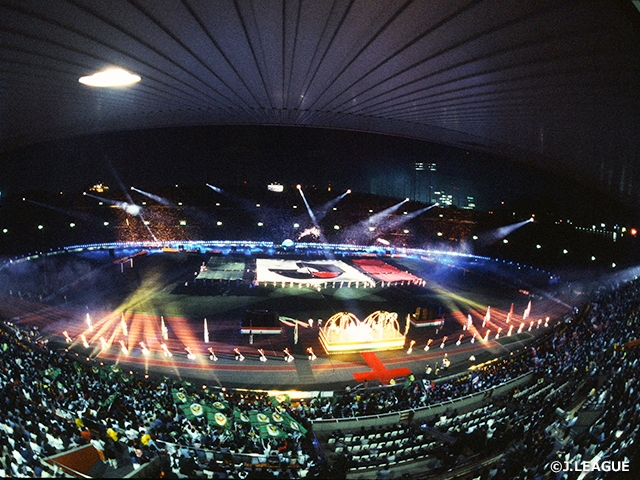 Their work was immediately paid off, as Japan defeated Korea Republic, China PR, and DPR Korea to claim the Dynasty Cup for the first time in August 1992. They went onto win their first title at the AFC Asian Cup, which was held in Hiroshima from October to November of the same year. Japan also won the Far Eastern Championship Games to claim all titles in Asia for the first time.

With the national team carrying great momentum and the fanaticism created by the J.League, the qualifiers for the 1994 FIFA World Cup USA™ attracted a great deal of attention. After winning against DPR Korea and Korea Republic at the final round, Japan was in position to qualify for the World Cup with a win against Iraq in their final match. However, despite carrying a 2-1 lead into additional time of the second half, the team conceded the late equaliser that cost them their ticket to the USA, a moment that was later became known as the “Agony of Doha.”

Nevertheless, this experience made the qualifiers for the 1998 FIFA World Cup France™ a national concern. Led by coach KAMO Shu, Japan started off the final round with a 6-3 victory over Uzbekistan, but concerns arose when they suffered a loss to Korea Republic at home. After the team drew against Kazakhstan in an away match, the leaders of JFA, led by President NAGANUMA Ken, made an unprecedented decision to sack coach Kamo during the team’s road trip. The team’s assistant coach OKADA Takeshi was promoted to take over the helm and after overcoming twists and turns, including a riot of the home fans, the team managed to reach the playoff with their spot into the World Cup on the line. Japan faced Iran in the play-off held in Johor Bahru, Malaysia, where OKANO Masayuki scored the decisive goal in overtime to send Japan into their first ever World Cup. 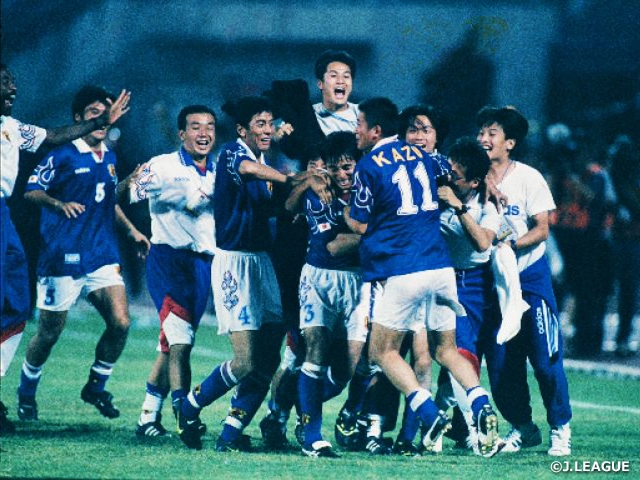 Becoming an Asian powerhouse that competes against the world

Despite losing all three group stage matches in their first ever World Cup appearance at the 1998 FIFA World Cup France™, led by French coach Philippe TROUSSIER, Japan reached the round of 16 at the 2002 FIFA World Cup, which was co-hosted by Korea Republic and Japan. From there on, Japan managed to qualify for the next four World Cups in a row, as coach Zico led the team at the 2006 FIFA World Cup Germany™, coach Okada succeeded what coach Ivica OSIM started after the Bosnian coach stepped down due to health issues at the 2010 FIFA World Cup South Africa™, and Italian coach Alberto ZACCHERONI led the team at the 2014 FIFA World Cup Brazil™. During that time, Japan won the AFC Asian Cup in 2000, 2004, and 2011, becoming an Asian powerhouse with the most Asian Cup titles

The Japan Women's National Team, also known as the Nadeshiko Japan, has also made a leap during this time. Since clinching their first FIFA Women's World Championship (known as the FIFA Women's World Cup from 2003) in 1991, and their first Summer Olympics in 1996, Japan steadily became a fixture in the international competitions. Especially since coach SASAKI Norio took over the helm in 2008, Japan boosted their international presence through their unique style that highlighted their techniques and pass-works to compete against physically and athletically superior opponents like the USA and other European powerhouses.

After reaching the semi-finals at the 2008 Beijing Olympics, the team led by captain and ace SAWA Homare achieved a historic feat at FIFA Women's World Cup Germany 2011™. Japan defeated the host country Germany in overtime with the goal of MARUYAMA Karina in the quarterfinals, followed by a 3-1 victory over Sweden at the semi-finals. At the final, Japan faced the undisputed champions USA, an opponent they have never won against. Despite giving up the initiative, Japan fought tenaciously to keep themselves in the match and scored the equaliser to force the match into overtime. USA retook the lead in the first half of overtime, but Sawa scored a fascinating goal with three minutes left to play in the second half to send the match into penalty shoot-out. With goalkeeper KAIHORI Ayumi standing in their way, USA failed to convert their first three spot-kicks and with Japan’s fourth kicker KUMAGAI Saki successfully converting her spot-kick, Japan claimed their first Women's World Cup title.

In the following year, Japan advanced to the final at the London Olympics, where they lost to USA to finish as the silver medallists, but it was enough to prove that the Nadeshiko Japan was one of the top teams in the world.

Although facing ups and downs, the men’s team has reached the round of 16 at the 2018 FIFA World Cup Russia™ and finished in fourth place at the Tokyo Olympics, which was held in 2021, both of which were the best results left by a team from Asia, making them a fixture at the top of the AFC. It can be said that the last 30 years have been a breakthrough era for Japanese football. 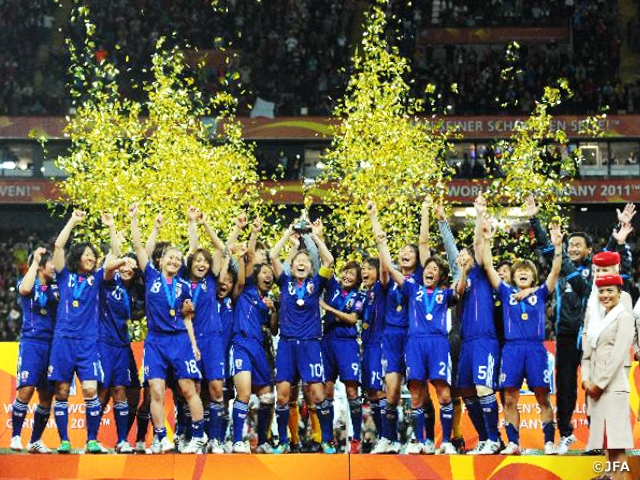