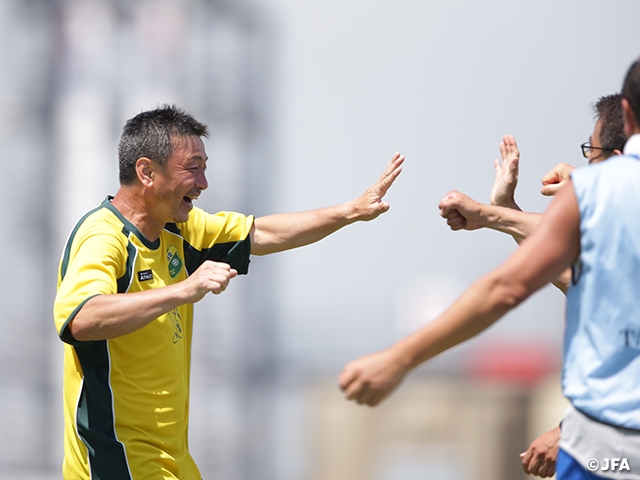 The semi-finals and final of the JFA 21st O-50 Japan Football Tournament took place on Monday 27 June, where T-Dreams 50 (Kanto3/Tokyo) claimed their first national title of the O-50 category.

Both semi-final matches were closely contested, as FC Funabashi 50 (Host/Chiba) and T-Dreams 50 showed heated battles in the midfield, while the match between Yamanashi Masters (Kanto1/Yamanashi) and Club Compass Nagoya (Tokai/Aichi) saw the Yamanashi side dominate the ball possession, while Nagoya created more opportunities in the attacking end. For both matches, the decisive moment arrived in the last five minutes, as T-Dreams and Club Compass each scored a goal to advance through to the final. 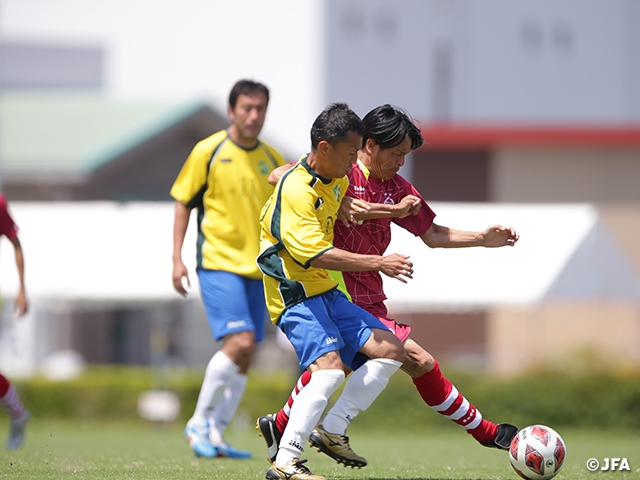 In the final, it was T-Dreams who took the initiative, as they dominated the midfield while their defence kept Club Compass at bay. The opening goal came in the ninth minute, when T-Dreams initiated a counterattack with a long feed delivered from the defence line. NOMOTO Hideo’s well-timed run allowed the striker to break loose and dribble past the goalkeeper to slot the ball into the open net.

In efforts to equalise, Club Compass utilised their substitutes to add more options in the attacking third, but T-Dreams continued to dominate the midfield to deny the Nagoya side from creating opportunities. Despite the last-minute efforts made by Club Compass to penetrate the flanks, T-Dreams managed to keep the clean sheet intact to win the national title. 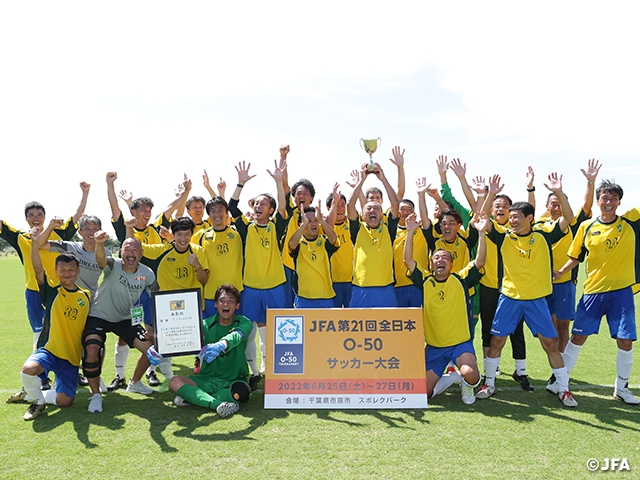 HONDA Yasuto, Player-Coach (T-Dreams 50)
I was able to win the national title in my second year with the team thanks to the help of the veteran players such as Mr. MAEDA Osamu and Mr. OKAMOTO Yoshiaki, as well as the efforts of everyone on the team. I personally wanted to prioritise having fun, but everyone wanted to go for the national title, so we decided to build a strong team based on the three principles of humility, respect and enjoyment. The club was founded by Teikyo High School alumni, but many people have expressed their interest in joining our team, so everyone is welcomed now. Having been involved in football for many years, I can say with confidence that you can still improve after 50. Some people have actually told me they have gotten better over the years, and I am sure everyone is already talking about next year's tournament.

NOMOTO Hideo (T-Dreams 50)
I participated in the O-40 nationals with another team, but this is the first time in my life that I've won a national championship. All the credit for the winning goal goes to ISHIMURA Chikashi for his pass. I am not an alumnus of Teikyo High School, but I feel that everyone genuinely loves football, and it is their lifelong passion. Football is the reason I can continue to work hard every day, and I am able to do this with the help of my family and everyone involved.

SUGIYAMA Takashi (Club Compass NAGOYA)
T-Dreams 50 was really good. We changed our approach in the second half to come from behind, but the wall was thick. It felt that there was a bigger gap between the two sides than the score suggests. We have faced many difficult matches from the first round but somehow managed to stay on our feet. We will reflect on this whole tournament and try to make the most of this experience to become a better team. We have great team chemistry, and we are expecting some good players to join from our O-40 team, so we will do our best to return to this stage. This is our second time losing in the final, so we believe that our third time is going to be the charm.

KAWANO Masahiko (FC Funabashi 50)
We have faced T-Dreams 50 in several training matches, but they would win the matches more often. In today’s match, they started to dominate in the second half, and showcased their superiority in experience and physical fitness. While many of our opponents are Teikyo High School alumni, we have many graduates from Funabashi Municipal High School and Shutoku High School, and we have been playing against them with a mindset of a challenger. Next year, we will be joined by many good players from the O-40 team, so we hope to work hard to improve the team.