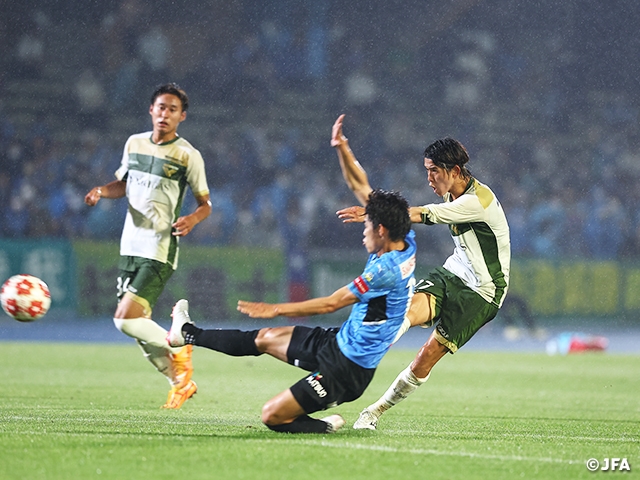 All the J1 teams fended off challenges from teams from lower categories in the second round, and although it seemed that there would be no giant-killings, J2 clubs continue to put up a good fight in this year's tournament.

Under the leadership of their new coach JOFUKU Hiroshi, who took over during this season, Tokyo Verdy (J2) have shown great form lately. Their second official match under coach Jofuku was the third round fixture against Kawasaki Frontale (J1), where they showcased a great aggressive performance to earn a victory over the J1 champions. In the round of 16, the J2 side defeated Jubilo Iwata (J1) in overtime, thanks to the goal scored by NARAWA Yuta in the 114th minute. The team will be looking to gain momentum by advancing to the semi-finals in order to provide a boost to their league campaign, which has seen them suffer three consecutive defeats in their last three matches. Their opponents, Kyoto Sanga FC (J1), are also looking for a boost in their bid to remain in the J1, and the two teams, both of whom have won the Emperor's Cup title in the past, go head-to-head in their quest to reach the final four for the first time in a long time.

The other J2 club still in the running is Ventforet Kofu (J2). In the round of 16, they defended their lead against Sagan Tosu (J1), who used all five of their substitutions by the 74th minute, to advance to the quarterfinals for the first time in three tournaments with a 3-1 victory. Although they lost their most recent league match on Saturday 3rd, they had been unbeaten in eight league matches up to that point, winning two and drawing six. This week they will play Avispa Fukuoka (J1). It will be interesting to see which of the two sides, the tenacious Kofu side or the stout defensive Fukuoka side, has more to offer.

A match-up between Vissel Kobe (J1) and Kashima Antlers (J1), both former winners of the Emperor's Cup, will also take place. Although Kobe are in the relegation zone in the J1, they defeated Yokohama F. Marinos (J1) in the round of 16 of the AFC Champions League in August. Can they repeat the same success in the Emperor's Cup, which is another knockout competition.

Following their league match from last weekend, Cerezo Osaka (J1) and Sanfrecce Hiroshima (J1) will square off in back-to-back weeks. Although Hiroshima who won the league fixture 2-0, it was the Osaka side who recorded more shots in this match. We will see how these two teams approach the match against an opponent they know very well.

This year's tournament is nearing its final stage. After the quarterfinals, the semi-finals and final will be held in October to decide the best team in Japan. Please stay tuned for the hotly contested race to the top.