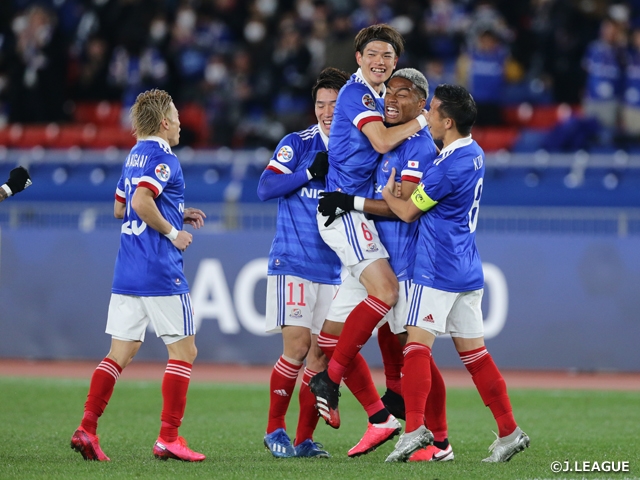 Yokohama FM showcased their attacking football to dominate the match, as the team took a three goal lead by the 33rd minute mark of the first half.

Following last week’s 2-1 away victory over Jeonbuk Hyundai Motors (Korea Republic), the team entered their second group stage match with a similar line-up, as they applied aggressive pressure from the early minutes. The opening goal came in the 12th minute, when the ball was connected through NAKAGAWA Teruhito to KIDA Takuya, before finding ONAIWU Ado in front of the goal, who made quick turn to strike a shot into the net, scoring his first goal since joining the team.

In the 31st minute, Nakagawa received the ball from Thiago MARTINS, before carrying the ball upfront and lifting a lobbing shot that sailed over the goalkeeper’s head and shook the net. Last season’s J.League MVP scored another goal in the 33rd minute, this time assisted by THEERATHON Bunmathan to extend the lead to three goals.

After seeing their first ACL group stage match getting postponed due to the spread of the Coronavirus Disease, Sydney also had their A-League match postponed due to inclement weather, making this match their first match since 31 January. With the players lacking match intuition, the team struggled to cope with the pace created by Yokohama FM.

The second half continued to see the home side take control of the match, as Onaiwu scored his second goal of the match in the 51st minute, when the striker connected with the cross sent by Marcos JUNIOR.

Sydney came close to scoring a goal, when Rhyan GRANT responded to a free kick and struck a header in the 56th minute, but his attempt was saved by Yokohama’s goalkeeper KAJIKAWA Yuji. In efforts to change the dynamics of the match, Sydney introduced Trent BUHAGIAR and Marco TILIO into the game, as the young talents combined to create a close opportunity in the 83rd minute, but the final shot taken by Buhagiar failed to capture the target.

In process of their 4-0 home victory, Yokohama FM displayed their dominance by outnumbering Sydney 24-5 in shots taken, while keeping 69.4% of the ball possession. With this win, Yokohama FM remain as the group leader of Group H with six points. 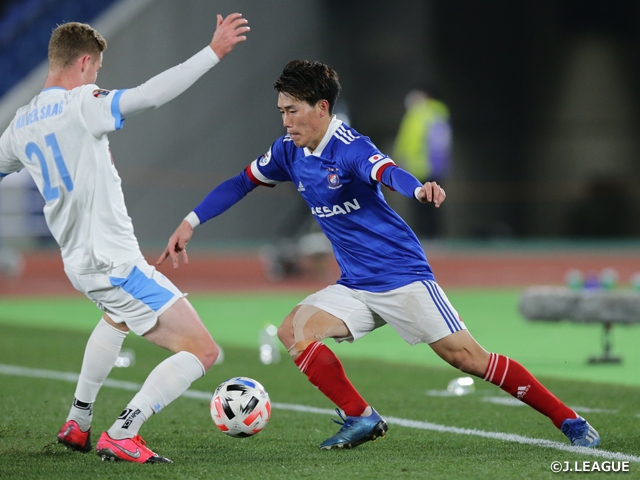 Due to the spread of the Coronavirus Disease, the match between Shanghai SIPG (China PR) and Jeonbuk Hyundai has been postponed to May. Yokohama FM is now scheduled to face Shanghai SIPG on Wednesday 8 April at home.

After starting off their first ACL appearance with a win over Johor Darul Ta'zim (Malaysia) last week, Vissel Kobe faced Suwon Samsung Bluewings in an away match.

With their match against Guangzhou Evergrande Taobao (China PR) getting postponed due to the spread of the Coronavirus Disease, this match represented Suwon’s first match of the tournament, as the home side started the match with a five-back formation. Although Kobe struggled to cope with the quick counterattacks initiated by the Korean side, the team managed to carry a clean sheet into the closing minutes of the match.

The golden moment came in the 90th minute, when SAKAI Gotoku responded to a pass delivered by Andres INIESTA and sent a cross towards the near post, allowing FURUHASHI Kyogo to score the game winner.

With this victory, Kobe remain as the leader in Group G, as the match between Johor DT and Guangzhou has been postponed to 20 May. Kobe is now scheduled to face Guangzhou on Tuesday 7 April at home.

Ange POSTECOGLOU, Coach (Yokohama F. Marinos)
We showcased a very good performance today. We entered the match strong and showed great discipline to take control of the game. The final result shows how dominant we were in this match. After failing to capitalise on our opportunities in our first match, we managed to make adjustments in today’s match. However, we still have plenty of room for improvements. More than the outcome of the matches, it is important that we believe and execute our game plan. We will continue to strive for a football style where the players can enjoy themselves on the pitch, while providing excitement for our fans.

DF THEERATHON Bunmathan (Yokohama F. Marinos)
I am happy that our team managed to earn three points, and I am glad that I was able to contribute for this victory. I was able to assist the third goal from a play I have confidence in. I spoke with Nakagawa prior to the match to get ourselves on the same page, so I was very happy to see him score that goal. This is my eighth time playing in the ACL, but if we can believe in our football style and our abilities, we should be able to advance beyond the quarterfinals.

MF NAKAGAWA Teruhito (Yokohama F. Marinos)
We were able to find our rhythm and work hard from the beginning of the match, which allowed us to score the opening goal. By scoring the second and third goal, we managed to take control of the match. Regardless of who we face, we are committed to execute our game plan and getting our jobs done. We have now won back to back matches to earn six points. We will continue to work hard so that we can win through the group stage undefeated.

FW ONAIWU Ado (Yokohama F. Marinos)
Despite creating many chances, we failed to convert our opportunities against Jeonbuk Hyundai in our previous match, so I was very eager to score goals for the team today. We have been able to communicate well with each other and our performance has been improving through each match, so we will continue to strive to become a better team.

Steve CORICA, Coach (Sydney FC)
This is a very disappointing result, but Yokohama FM played very well, so all credits go to them. After going three weeks without a match, we struggled to adjust to the high-tempo match speed and conceded many goals from our own mistakes, which was an uncharacteristic display from us. The young players who entered as substitutes performed well but we still failed to convert our opportunities. We hope to make the necessary adjustments ahead of our next match.

[an error occurred while processing this directive]
AFC CHAMPIONS LEAGUE 2020