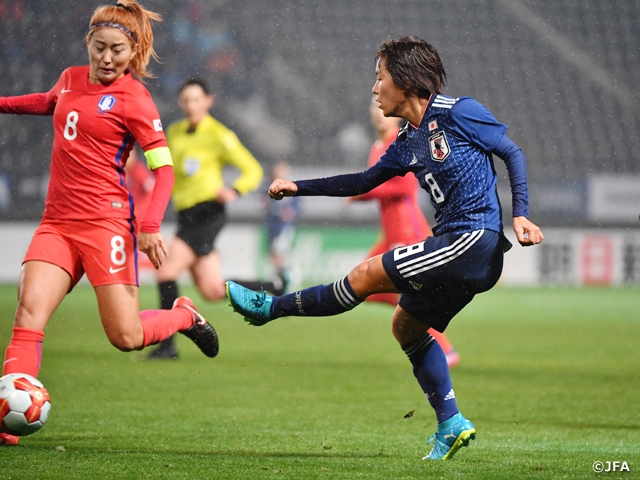 Nadeshiko Japan employed a 4-4-2 formation in the match that kicked off at 18:55.

SAMESHIMA Aya entered the game as one of the centre backs, while OYA Ayumi started at right fullback. Forward TANAKA Mina paired up with IWABUCHI Mana upfront. Positioned at defensive midfielder, UTSUGI Rumi made her 101st international A-Match appearance and was named captain of the team.

In the cold rain, Japan struggled to move the ball effectively at the beginning of the game facing severe pressure from the Korean counterparts.

In the 8th minute, MANYA Miho, after receiving the ball on the deep left, sent a left-footed cross to the far side. Tanaka reacted by making a full stretch and her well-directed header found the left side of the Korean net to gave her side the opening goal of the match. 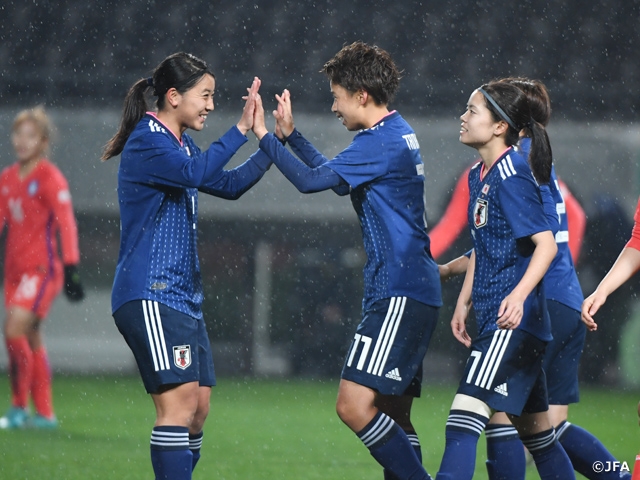 Just five minutes later, Japan conceded a penalty kick after HAN Chaerin’s pass hit Utsugi’s arm inside the box. Goalkeeper IKEDA Sakiko reached out and got her hand on the ball, but CHO Sohyun’s struck it with pace and found the back of the Japanese net. Korea Republic succeeded in levelling the game 1-1.

Japan attacked more fiercely as the pressing from the Korean side started to ease in the second half. In the 54th minute, Tanaka collected a pass from Iwabuchi and made an excellent individual effort by getting past two defenders and firing a right-footed shot at goal, but her attempt was denied by a fine save by the opposing goalkeeper, KIM Jungmi.

Thereafter, the game stayed in the balance and coach TAKAKURA Asako decided to send NAKAJIMA Emi onto the pitch to impact the game. This substitution worked brilliantly.

In the 71st minute, Oya delivered a right corner to the front of the goal, where MIYAKE Shiori reacted and redirected the ball to the far side. Nakajima with no surrounding defenders calmly struck it with her left foot and reclaimed the one-goal lead for the Nadeshiko squad.

However, Korea Republic exploited the momentary gap in Japanese defence to tie the game once again. LEE Mina, who had been instrumental in created chances for the Korean team, sent in an early cross from the right side and HAN Chaerin scored an equaliser with her header. The game was all squared at 2-2.

Both sides displayed their strong determination to win the first game, but it was Nadeshiko Japan who came on top of the close contest with a late winner. In the 83rd minute, Nakajima fired from range and her attempt that was struck with force hit the crossbar. Iwabuchi reacted to the deflection inside the box and calmly evaded the challenge of the opposing defender to tap in a go-ahead goal to give her side 3-2 advantage. Her goal raised the roof of the stadium where 3080 spectators came to watch the thrilling match despite the cold weather.

Korean Republic showed their resilience by levelling the match twice, but Japan edged a tough game 3-2 and made an excellent start towards winning the championship.

TAKAKURA Asako, Coach of Nadeshiko Japan (Japan Women’s National Team)
I told my players to play aggressively from the beginning of the match, but partly due to the slippery pitch, they got cold feet after facing strong pressure and high-paced attacks from Korea. We failed to take the early initiative of the match. As the players got used to the strong pressure from the Korean side in the second half, they regained composure and performed much better. The first match is always tough, but I also believe that the growth of the young players is essential for the team and decided to use them in the game. There were risks and I found many areas where they still need to work on, but I must say that they fought with courage today.

DF #23 MIYAKE Shiori (INAC KOBE LEONESSA)
We were determined to win at any cost, but conceded many goals as well. This is one of the areas that we need to work on. Watching the video footage of their previous matches, we knew that the forward players of Korea would put strong pressure upfront for the first 15 minutes. However, we conceded a goal immediately after we scored one. As a defender, this is an important issue that needs to be addressed and fixed. I played as a centre back and paired up with Sameshima who has experience in international competition. We play together at INAC Kobe and understand each other quite well, and in the game today we stayed vocal as well. When we play for the national team, we cannot complain that we do not have enough time together. In the limited time, I decided to proactively talk to Sameshima and other teammates during our practice sessions as well as when we watch and analyse the match videos. We are looking to reduce the number of goals we concede in the next match.

MF #7 NAKAJIMA Emi (INAC KOBE LEONESSA)
I came off the bench as a wide midfielder. I tried not to position myself in the middle, but waited near the touchline and looked for chances to cut in. When I entered the match, I was thinking about creating chances or finishing with a shot. I felt that I was brought on to the pitch to impact the game. I didn’t win it by myself, but instead it was a team effort including the starters who fought hard the entire game.

FW #11 TANAKA Mina (NIPPON TV BELEZA)
We did well to score an opener early in the game. Our opponents put strong pressure on us from the beginning, but I, personally, stayed calm and kept my composure. Regarding the first goal, I reacted to the cross on the far side and directed it past the goalkeeper towards the near side. I must thank Manaya for delivering an excellent cross. I must say also that I only could aim towards the left side, but it was good that the opposing goalkeeper went the other way. However, I missed a great chance to score another in the second half. This is one area that I need to improve as well. I am looking to perform better in the coming game and leave with no regrets.

YOON DUK YEO, Coach (Korea Republic Women’s National Team)
I would like to congratulate the Japanese team on winning today. Despite the rain, we had an excellent game. There was only a small difference that separated the two sides. We need to recover from the fatigue of playing today’s match and make a good preparation for the next game. We drew against DPR Korea in April and I heard that they are eager to win the match with us this time. If we lose the coming match, we will be in a very difficult position. We have to make good recovery and make the best possible preparations in the limited time we have before facing them. 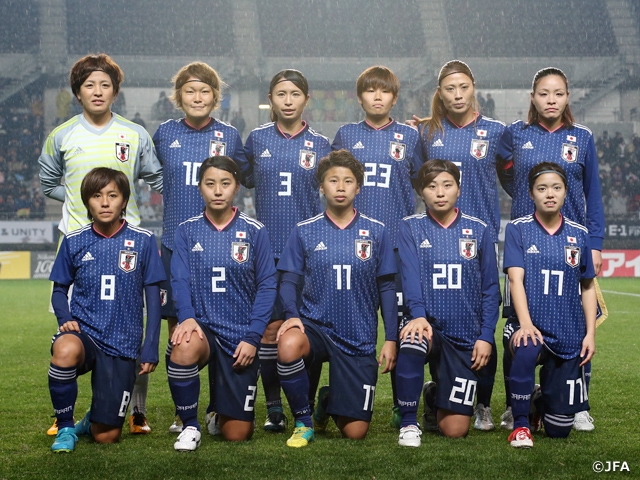