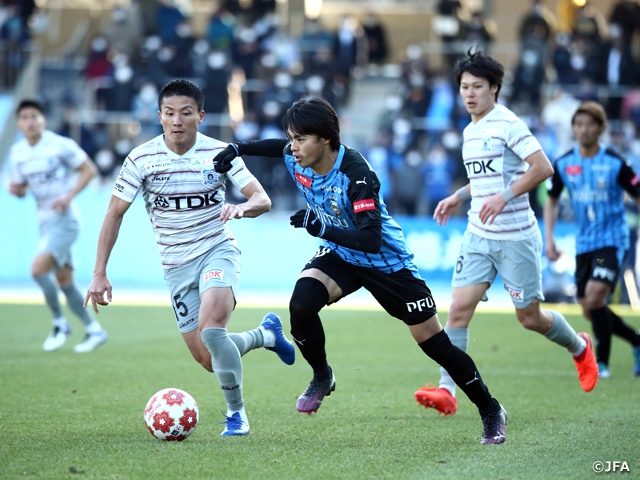 After claiming the J1 league title, Kawasaki Frontale earned a 2-0 shutout victory over this season’s J3 champion Blaublitz Akita at the semi-finals of the Emperor's Cup JFA 100th Japan Football Championship. Kawasaki is just one step away from winning their first ever Emperor's Cup title and having a season with multiple titles.

In an attempt to keep the score-line close, Akita parked the bus to defend against Kawasaki, but their efforts were not enough to contain the J1 champion.

The opening goal came in the 39th minute, when the ball was connected through IENAGA Akihiro, Leandro DAMIAO, and OSHIMA Ryota at the centre of the field. With the attention of the Akita defenders being sucked in towards the middle, MITOMA Kaoru made a run into the box from the left flank to receive the final pass from Oshima and slotted the ball into the far corner. 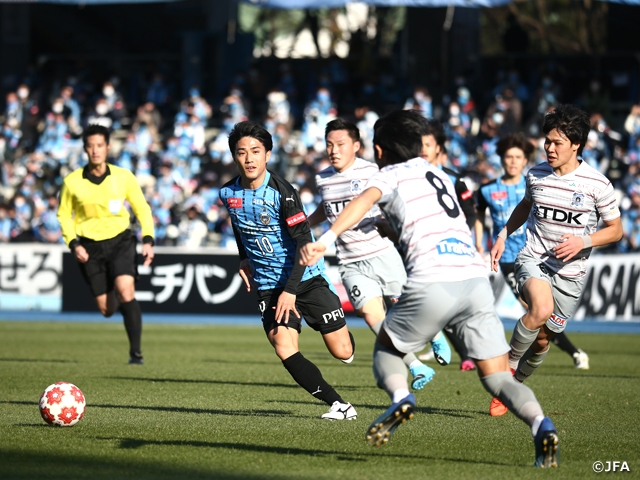 Due to the effect of COVID-19, this year’s Emperor's Cup was held in a unique format. For Kawasaki, this semi-final fixture was their first match of the tournament, as the team had to reset their mind-set after celebrating their league victory at the J.League Awards.

Despite the unorthodox cup schedule, led by GK JUNG Sung-Ryong and TANIGUCHI Shogo, the Kawasaki defence kept their composure to showcase a solid performance, containing the Akita side with just one shot. With TANAKA Ao scoring a direct FK towards the end of the match, the J1 champion cruised through the semi-finals with a 2-0 shutout victory.

NAKAMURA Kengo, who will retire after this season, celebrated the team’s victory on the pitch, as the veteran player made his final appearance at the club’s home stadium in Todoroki as a late substitute. Four years ago, the club lost to Kashima in overtime at their first ever Emperor's Cup final. Nakamura shared his aspiration ahead of the big match, “I will conclude my career on a high note.” 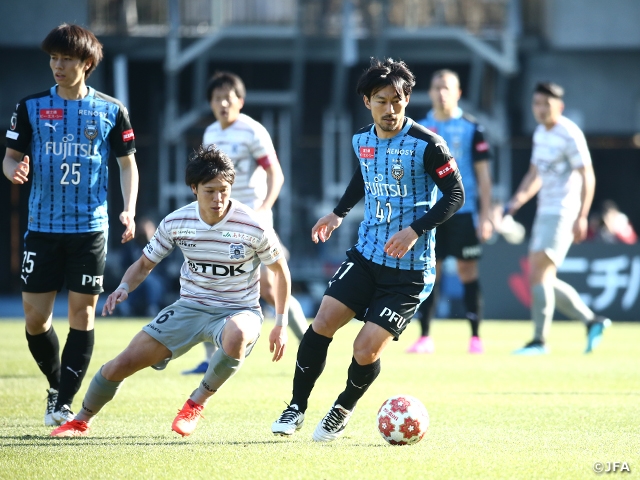 ONIKI Toru, Coach (Kawasaki Frontale)
This was our last match at Todoroki this year. It is always hard facing teams from different categories, but the players did a great job of keeping their composure to execute our usual football. I don’t think we conceded any close chances to our opponent. It would have been better if we scored more than three goals, but the team worked together to win this difficult match. We entered this season with a goal of winning multiple titles, so I am glad we are through to the final.

TANAKA Ao (Kawasaki Frontale)
This was not an easy match. Our opponent kept their tactic simple and we had to show our intention to score goals. We played a bit too conservatively in the early minutes of the first half but made adjustments as the match progressed and managed to score the opening goal. We could have scored more goals and I personally made some mistakes as well, so there were plenty of room for improvements. However, winning the match is our top priority. It doesn’t mean that we can neglect the entire process, but it was great that we managed to win the match today.

YOSHIDA Ken, Coach (Blaublitz Akita)
I would like to thank all of our fans for supporting us throughout this difficult time. Thank you very much. Despite falling short from winning, I hope we were able to showcase a memorable match for those watching this match. We will feed off of this experience and continue to strive to become a better team. Our players were able to showcase everything they’ve got, as they showed great collective efforts in defence and cooperated well to respond to the through balls.

YAMADA Naoyuki (Blaublitz Akita)
Our opponent was simply the better team. We entered the match with the intention to win the match 1-0, but it was difficult to possess the ball against them. Each of the opposing player showcased great skills to possess the ball and our patience were being tested for a long stint. Although we conceded a goal, I feel like we still managed to showcase our defensive football style. Our opponent’s fire power was just too much for us to handle. We hope to make the most of this experience to improve the team.