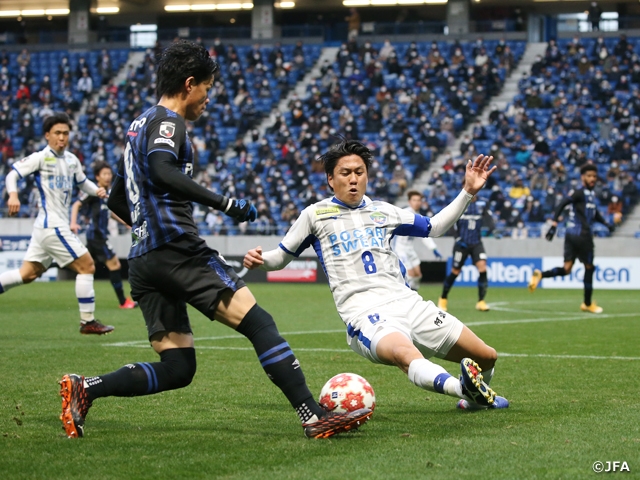 With fine saves made by both GKs, Gamba Osaka’s HIGASHIGUCHI Masaaki and Tokushima Vortis’ KAMIFUKUMOTO Naoto, the semi-final fixture turned out to be a tight match, but at the end, the runners-up of this season’s J1 showcased their superiority over the J2 champion. Following the 2-0 win, Gamba’s coach MIYAMOTO Tsuneyasu commented, “We managed to showcase what we worked on this season.”

After finishing the first half 0-0, Gamba Osaka picked up their pace in the second half. The Osaka side scored the opening goal in the 53rd minute, when ONOSE Kosuke delivered a cross to allow KURATA Shu to strike a volley shot with his left foot. Although the shot was blocked by the Tokushima GK, PATRIC was there to convert the deflection to put Gamba Osaka ahead.

This season, Gamba Osaka held an undefeated record (15 wins and three draws) at the J1, when scoring the opening goal. That record remained true as FUKUDA Yuya responded to a through ball delivered by Patric to score the team’s second goal in the 82nd minute, sealing the win for Gamba Osaka. 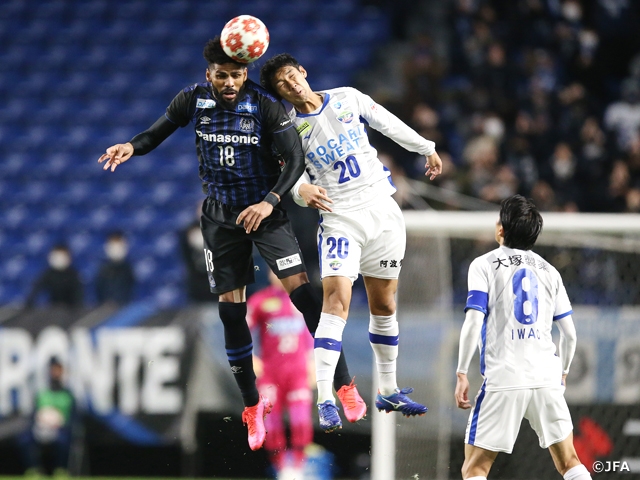 The Osaka side will now face this season’s J1 champion Kawasaki Frontale. Last time the two faced each other on 25 November, Kawasaki won the match 5-0 to clinch the league title. Following their devastating loss at the league, MIURA Genta mentioned, “This is our opportunity to redeem ourselves. We want the title.”

Tokushima had an opportunity to score the opening goal in the 49th minute, when KAKITA Yuki connected with the cross delivered by NISHIYA Kazuki, but his attempt failed to capture the target. Despite firing 15 shots, which was more than the Osaka’s 13, the J2 champion fell short from reaching the final. Tokushima’s coach Ricardo RODRIGUEZ, who will be taking the helm at Urawa next season, summed up his years in Tokushima, “Over the four years, I was able to contribute to the club’s development.” 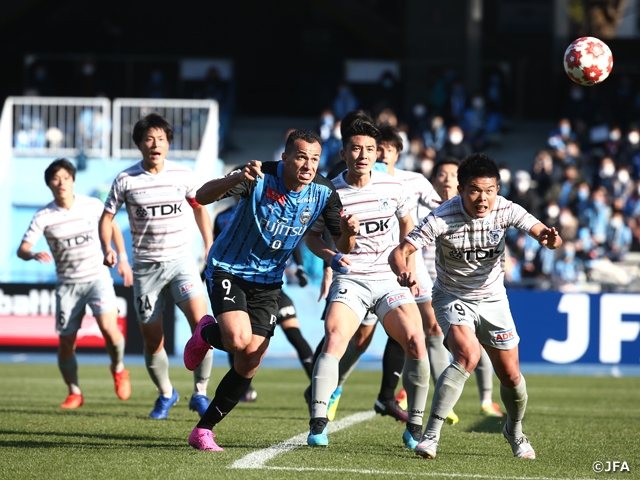 MIYAMOTO Tsuneyasu, Coach (Gamba Osaka)
Tokushima is a team that can really keep the ball moving, so we prepared two plans against them. A plan to force turnovers from their build-ups to initiate short counters, and a plan to face their defence head-on. I told my players that it was okay to let the opponents hold the ball possession. We were able to execute our game plan as we hoped for. There were some occasions where we chased the ball too deep and allowed our opponent to create threats, but our players did a fine job of making the adjustments on the pitch.

USAMI Takashi (Gamba Osaka)
In defence, I tried not to chase the opposing centre halves too much and focused on eliminating the pass courses to their two defensive midfielders. In terms of offence, I set my emphasis on collaborating with Patric to rotate our runs. Before the injury, I was always playing with pain, but now I am pain-free. We have been able to conduct good trainings and our conditions are getting better. We will resume our trainings from tomorrow and prepare to enter the final in our best condition.

Ricardo RODRIGUEZ, Coach (Tokushima Vortis)
I didn’t get the impression that we were completely inferior to our opponent. Although there were stints where Gamba Osaka took control of the ball possession, we also had our moments where we controlled the match. By keeping the ball in the opposing territory, we managed to reduce the risks of allowing our opponent to attack our territory. However, they have reminded us that one or two mistakes will cost the match when playing a J1 club.

IWAO Ken (Tokushima Vortis)
When looking back on our game plan and how we played in the first half, it wasn’t like we didn’t have any chance today. However, in terms of “scoring” and “winning matches” in 90 minutes, Gamba Osaka showed so much intensity and momentum, which is something we must learn from them. This season was a memorial season, as we managed to achieve our goal of reaching the J1 and winning the J2 title. We will be playing at J1 next season, so we hope to use this experience to prepare ourselves ahead of the new season.