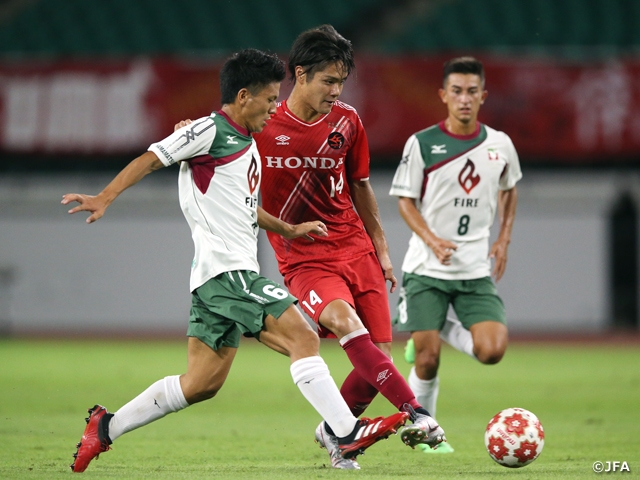 The match saw Tokoha University take the initiative through their aggressive pressure, as coach YAMASHITA Shuya later reflected on their approach, “We thought of ways to win against Honda FC.” Two minutes into the match, Tokoha’s MAEDA Shoma made a run into the opposing box and struck a shot, but his attempt failed to capture the target.

Following the early aggression shown by the university side, Honda FC gained control of the ball possession. In the 14th minute, Honda FC capitalised on an error committed by the Tokoha University defence, as HACHINOHE Yuta intercepted a pass before sending a cross towards the middle, allowing OMACHI Shogo to score the opening goal. Omachi scored his second goal in the 26th minute, when he converted a loose ball in the box to give the amateur seed a 2-0 lead at halftime. 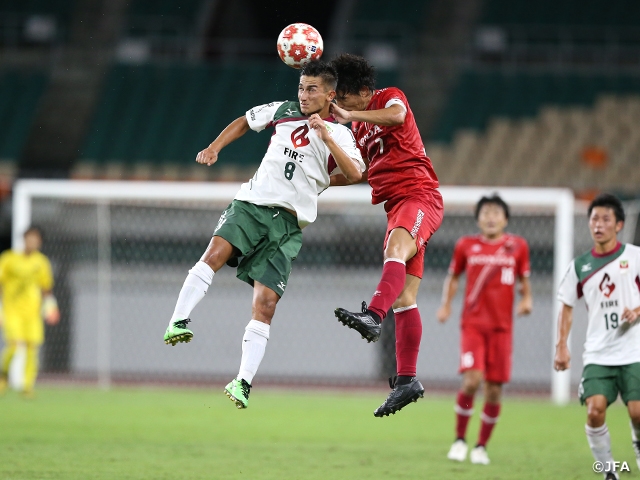 Trailing by two goals, Tokoha University continued to show their aggression in the second half. A close opportunity was created in the 75th minute, when Maeda struck a shot from distance, but his effort went wide of the goal. Despite showing great momentum in offence, Tokoha University struggled to convert their chances, as the match progressed with Honda FC keeping the lead.

After Honda FC made some changes, Tokoha University made three changes in the 87th minute to add layers to their offence. Their prolonged efforts finally paid off in additional time, when Yamashita converted a corner kick to cut their deficit in half, but Tokoha University fell short from equalising the match, as Honda FC advanced to the third round. 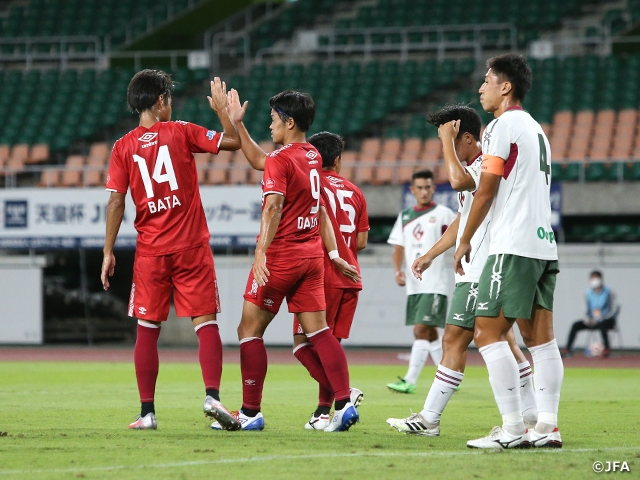 The remaining fixture of the second round, Fukuyama City FC (Hiroshima) vs FC Baleine Shimonoseki (Yamaguchi), will be played on Wednesday 30 September.

IBATA Hiroyasu, Coach (Honda FC)
Our opponent started off a little stiff, which gave us too much time to think with the ball and ultimately slowed down our ball move movement. We played a bit too passively, but winning the match is the top priority in a tournament. A high scoring match is more appealing for the fans, but we focused on just winning today. It is rare to see two teams from the same town of Miyakoda clash at the Emperor’s Cup. As the Amateur seed and as the representative of Shizuoka prefecture, we will continue to strive to become the Emperor's Cup champion.

OMACHI Shogo (Honda FC)
We knew that if we can capitalise on just one chance, we can take control of the match, so we were keen not to miss out on our opportunity. The ball took a lucky bounce for us when I scored my second goal. We are expecting another tough match in the next round, but we are committed to make a run until we face a J.League club. The Emperor's Cup gives us the opportunity to face teams we normally do not face, and it is a stage that can give us national recognition, so we will give our utmost efforts to reach the pinnacle.

SAWANOBORI Masaaki, Coach (Tokoha University)
We failed to connect the final pass, but overall, we were able to showcase our football. Our opponent showcased great ball movements, but that was something we were expecting. We managed to play with great aggression in the early minutes of the match and during the second half. Although we tried to equalise the match by changing the players and the system, our opponent was simply the better team today. The fact that we were able to score from a set-play and put up a courageous fight until the end gives us something positive to take away from this match. A 1-2 score against the best amateur team in the nation is not a bad result.

YAMASHITA Shuya (Tokoha University)
Although the final score was 1-2, our opponent was way out of our league. We were not able to showcase our pressing football style. Our opponent made better approach to the ball and showed quicker transitions. However, as the representative of Shizuoka, many people have supported us to get to this tournament, so we did not want to end the match emptyhanded. In the scene where I scored the goal, a great ball was delivered, so I am glad that I was able to convert it. By facing a stronger adult’s team, the younger players were able to learn so much from this match, so we hope to utilise this experience to become a better team.