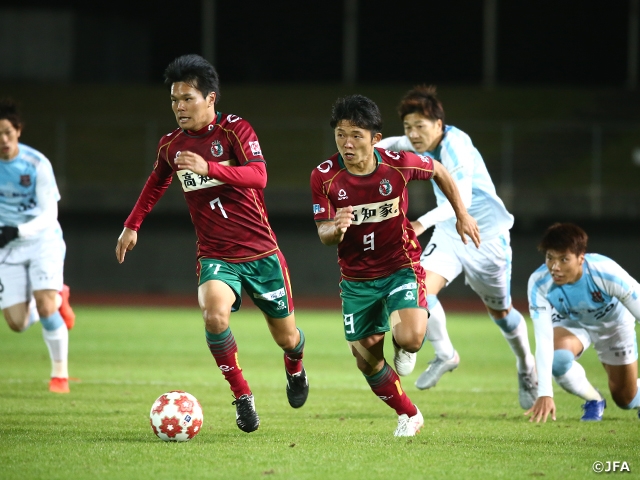 While both teams entered the match cautiously, it was FC Tokushima who took the initiative of the match, as their GK OGINO Kenjiro later mentioned, “We played in the same Shikoku League until last season, and we have lost three head-to-head matches while winning just one. With them being promoted to the JFL, we were not expecting a rematch against them, so we were highly motivated for this match.” The opening goal came in the seventh minute, when GOTO Takuma broke through the right flank, before sending a cross towards the centre. Although the ball was cleared by the Kochi defence, MATSUMOTO Keisuke was there to collect the loose ball and fire a powerful shot that shook the net. Following the opener, Kochi gradually picked up their pace to control the ball, but led by AMO Ryosuke, the Tokushima defence showcased a tenacious effort to keep the Kochi offence from creating opportunities at the final third. In the 23rd minute, Tokushima’s SHIMODA Kota earned a FK deep in the Kochi territory after breaking through from a counterattack, which led to a close attempt made by Matsumoto to threaten the Kochi goal. 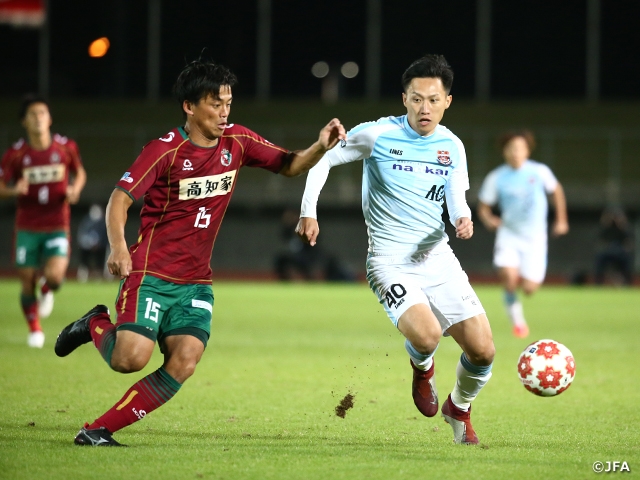 Just as the match was about to enter halftime, Kochi captured the equaliser during additional time of the first half. The goal came from a sequence of play started by HIRATA Kenichiro’s cross from the left side, which was headed down by AKAHOSHI Kaima at the far side, allowing TAGUCHI Ryo to redirect the ball into the net. Coach NISHIMURA Akihiro described this equaliser as “A goal that gave us courage,” and made a tactical change in the second half, bringing in AOKI Sho and shifting their formation from a single anchor to a double anchor formation. Regarding this change, coach Nishimura later reflected, “Winning the match is everything at a tournament. In order to create an advantageous situation at the final minutes, we had to first prioritise our defence.”

By adding a layer to their midfield, Kochi started to increase their ball possession and created more chances in the second half. A close opportunity came in the 52nd minute, when they exchanged quick passes to switch sides, allowing NISHIMURA Yuta to send a through ball to NAGAO Yoshikimi, who ran into the goal area, but the play was saved by the opposing GK Ogino. Despite putting up an equal bout, Tokushima started to run out of gas, as they entered this match with just a two day rest following three consecutive matches at the regional champions league.

With Tokushima’s momentum shrivelling, Kochi took advantage of the situation. The golden moment came in the 76th minute, when Aoki passed the ball to Akahoshi at the right side, who delivered a cross towards the middle, allowing Nagao to strike the ball into the goal, giving Kochi the long awaited lead. Tokushima rallied back in the closing minutes of the match, but Kochi’s GK IKEGAMI Naotaka made some spectacular saves to keep their lead intact, as Kochi won the match 2-1. Nagao, who scored the decisive goal, commented after the match, “We used to be much weaker mentally, as we did not have the mental strengths to fight back after conceding a goal. The fact that we managed to come from behind gives us great confidence moving forward.” 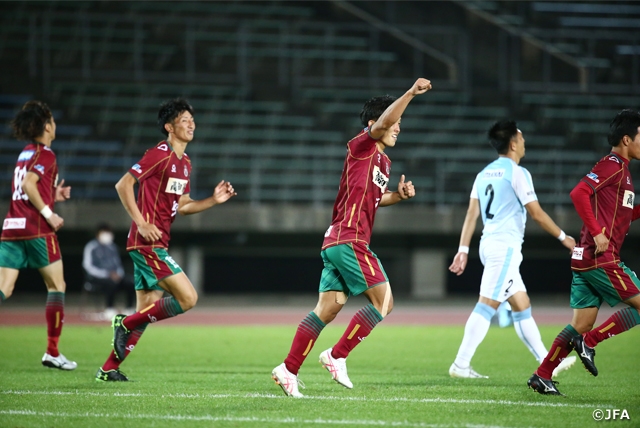 NISHIMURA Akihiro, Coach (Kochi United SC)
We played very well in the second half of our JFL match played three days ago and I did not make many changes to our line-up, so that the players can carry the vibes from that match. Although we entered the match poorly, we still managed to keep our composure and equalise the match just before halftime, which was massive for us. The fact that we are able to enter and make a deep run at this milestone event is giving our players a priceless experience. We will challenge the next round as the representative of Shikoku. We have nothing to lose, so we will give our utmost efforts and try to leave nothing behind.

MF #10 YOKOTAKE Tsubasa (Kochi United SC)
We looked heavy and undecisive in the early minutes, which allowed our opponents to play freely in the open space. We made some fundamental errors that led to the opening goal, which put ourselves in a tough spot. However, each player was able to execute their jobs in the second half. Personally, I was able to clarify my defensive responsibility when Aoki entered the match, and that has allowed our offence to gain momentum. We will enter the next round as the representative of Shikoku and fight with pride against other regional representatives.

INUZUKA Yusuke, Coach (FC Tokushima)
We entered the match in great form, as our players were well organised and did a great job to execute our game plan. However, we certainly looked fatigued in the second half. We started to make mistakes and allowed our opponent to take advantage of the situation, which eventually led to that second goal. Our players fought hard until the very end. We had many talented players on our team, so I really wish that I could have allowed them to play to their full potential and let them win the match. Despite the loss, we are making forward progress as a team, so we will continue to build the football style of FC Tokushima.

GK #99 OGINO Kenjiro (FC Tokushima)
Despite facing a team from the JFL, we still believed we had a chance if we can possess the ball and keep a clean sheet. Although we manged to control the game in the early minutes, we started to run out of gas in the second half and allowed our opponent to score two goals. Even if we perform well, it does not mean a thing at a tournament if we cannot win the match. The Emperor’s Cup is a special tournament where players from lower leagues can make a case for themselves. I have been on the roster when I was with Cerezo Osaka, but this was my first time playing in the Emperor’s Cup. I was pretty nervous at first, but I feel like I was able to leave a mark by making a few good saves during this match.