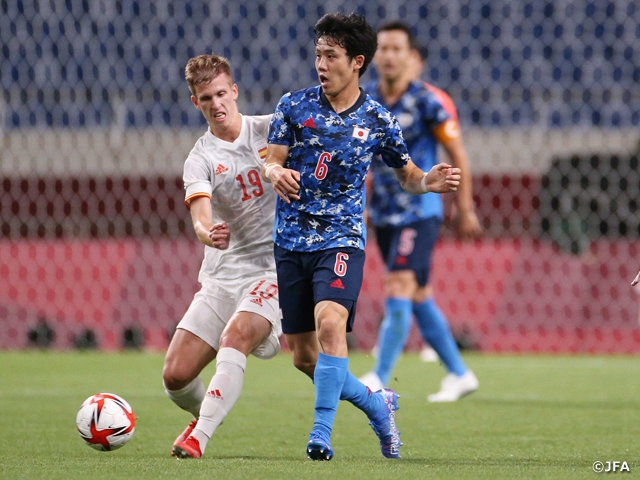 The Games of the XXXII Olympiad (Tokyo 2020) men's football tournament semi-finals took place on Tuesday 3 August. At Saitama Stadium 2002 the U-24 Japan National Team faced the U-24 Spain National Team.

Heading into the semi-finals, over-age player SAKAI Hiroki (Urawa Red Diamonds) described their opponent as “a well organised team with great individual talent. They are the top candidate to win the gold medal.” 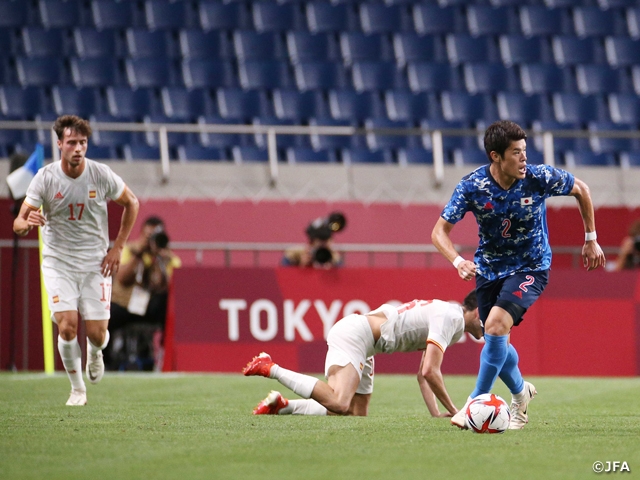 With TOMIYASU Takehiro (Bologna FC 1909) suspended for this match, ITAKURA Kou (Manchester City) started as the centre-back, with NAKAYAMA Yuta (PEC Zwolle) and HATATE Reo (Kawasaki Frontale) playing as the left full-back and left midfielder respectively. Facing one of the tournament favourites, coach MORIYASU Hajime sent off the players by telling them, “Let’s play tenaciously and showcase our resilience.”

The match started with Spain dominating the ball possession, but KUBO Takefusa (Real Madrid), ENDO Wataru (VfB Stuttgart), and TANAKA Ao (Fortuna Dusseldorf) kept close eyes on the Spanish midfielders to prevent them from initiating the attacks. Despite being forced in the defensive end for a long stint, Japan managed to keep the first half scoreless with the tenacious efforts made by the defensive players such as TANI Kosei (Shonan Bellmare), YOSHIDA Maya (U.C. Sampdoria), and Itakura.

Reflecting on the first half, coach MORIYASU Hajime mentioned, “Although we were forced to play defence for a long time, we kept our composure and anticipated for our opportunity to exploit the open space behind our opponents.”

Spain continued to take control in the second half, almost winning a PK in the 56th minute, but Yoshida’s tackle was ruled as a non-foul after the play was reviewed by VAR.

In efforts to change the dynamics of the match, Japan brought in UEDA Ayase (Kashima Antlers) and SOMA Yuki (Nagoya Grampus) in the 65th minute. With the two teams coming off a quarterfinal match that lasted 120 minutes, players from both sides started to show signs of fatigue, allowing the match to open up and see more chances created in the attacking third. Soma made numerous runs down the left side to create opportunities but couldn’t find ways to solve the Spanish defence.

With time running out, Spain introduced Marco ASENSIO in the 84th minute to add layers to their offence. A close opportunity was created in the 87th minute, when Martin ZUBIMENDI struck a shot from close range, but Itakura made a sliding effort to block the shot, keeping the clean sheet intact after 90 minutes of play.

The deadlock was broken in the second half of overtime, when Asensio made a cut-in move from the right side towards the centre before striking a spectacular left footed shot that pierced the far side of the Japanese goal in the 115th minute.

“We were able to defend through 115 minutes, and we didn’t concede any clear shots until that moment. It was a reminder that it only takes one clear shot for a world class player to capitalise.” Said Tani after the match.

Japan made their final efforts by brining Yoshida upfront to initiate their power-play. Despite the desperate attempts made by Japan, the Spanish defence line kept great composure to evade the attacks, keeping the clean sheet for the entire 120 minutes. 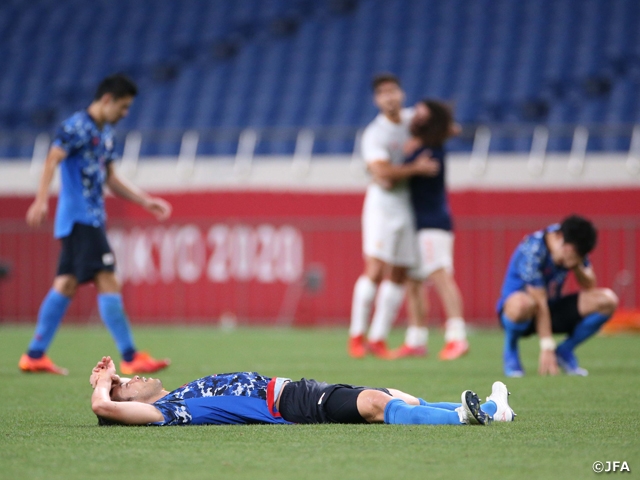 After losing 0-1 at the semi-finals, Japan will now play in the bronze medal match.

“There is a big difference between an Olympian and a medallist. We will give our best effort to prepare ourselves ahead of our next match against Mexico.” Said the Japanese coach.

Team captain Yoshida shared his optimism ahead of the bronze medal match, “As you saw today, this team is capable of showcasing great football. We can win the medal if we can play with confidence. Let’s finish off the tournament by winning a medal!”

Japan will seek to win their second bronze medal since winning their first in the 1968 Mexico City Olympics, when they face Mexico on Friday 6 August at Saitama Stadium 2002.

MORIYASU Hajime, Coach of U-24 Japan National Team
It is very disappointing that the efforts made by our players and staffs could not come to fruition, and that we couldn’t obtain our desired result. The player worked extremely hard to deliver a hard fought victory to our fans. We would like to thank all the people for their support. However, we are not done yet. We need to maintain our focus for our next match. We are devastated, but we need to showcase our defiance and resilience to make a challenge to win the medal.

GK #12 TANI Kosei (Shonan Bellmare)
This is such a disappointing result. We all knew that Asensio was capable of doing that. It wasn’t like we were caught off-guard, but they were simply better than us. We weren’t able to keep the clean sheet for another five minutes, and I wasn’t good enough to help the team win this match. We will enter our next match with a rebound-mentality and strive to earn a victory. 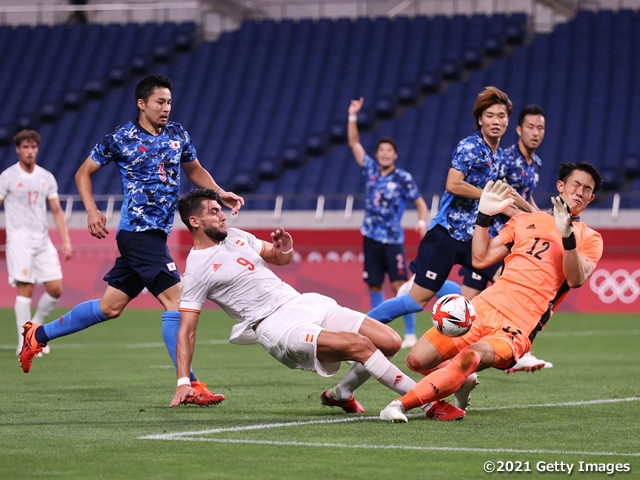 DF #3 NAKAYAMA Yuta (PEC Zwolle/Netherlands)
It was such a close match that left us thinking, “what did we lack?” When losing a match we couldn’t afford to lose, we need to make the most of that experience. We still have one more match, so we must accept this result and use it as motivation to win the medal. 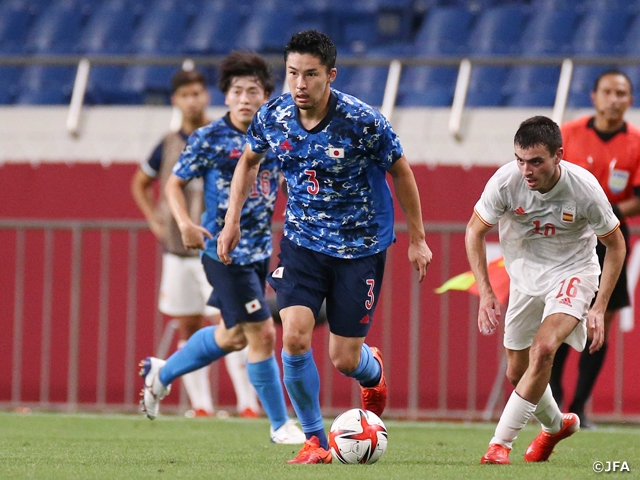 DF #4 ITAKURA Kou (Manchester City/England)
We must acknowledge that we lost the match after conceding that shot at the very end. We worked hard to achieve our goal of winning the gold medal, so we really wanted to win this match. It is very disappointing that we lost this fashion, but the tournament is not over yet, so we must reset our minds and give our best efforts to win the bronze medal. 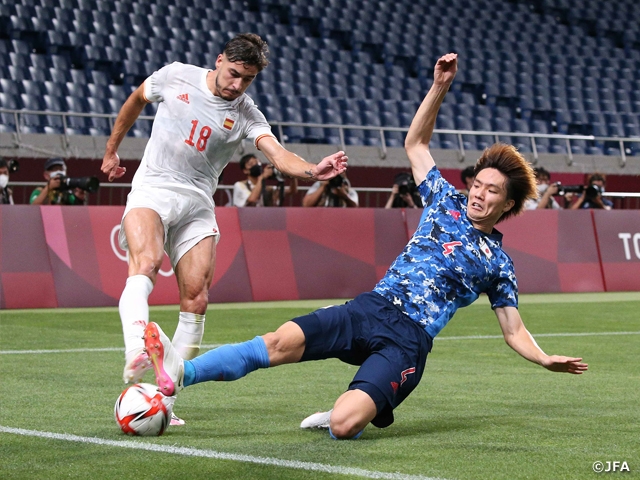 DF #5 YOSHIDA Maya (U.C. Sampdoria/Italy)
Although we allowed our opponent to dominate the ball possession, we managed to make use of the scouting reports to keep the clean sheet for over 100 minutes, close to 115 minutes, but the difference in quality between the team sides turned out to be the decisive factor at the end. However, we are not done yet. We hope to win our next match and finish the tournament as a medallist. 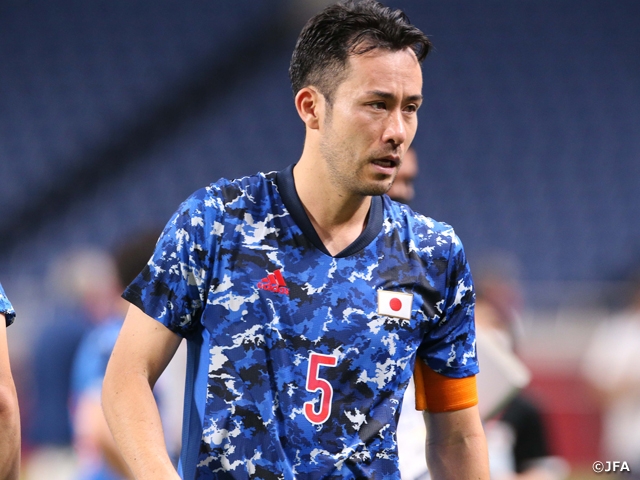 MF #10 DOAN Ritsu (PSV Eindhoven/Netherlands)
Although we are getting fatigued, we were determined to execute our game plan, which turned out to be effective to some extent. Although we managed to create some opportunities from counterattacks, it once again made me feel so useless for not being able to capitalise on those chances. We will continue to showcase our best efforts in our next match. We are presented with an opportunity to win a medal at the Olympics, and I feel that we are being tested here, so I will strive to showcase a tenacious effort to win the match. 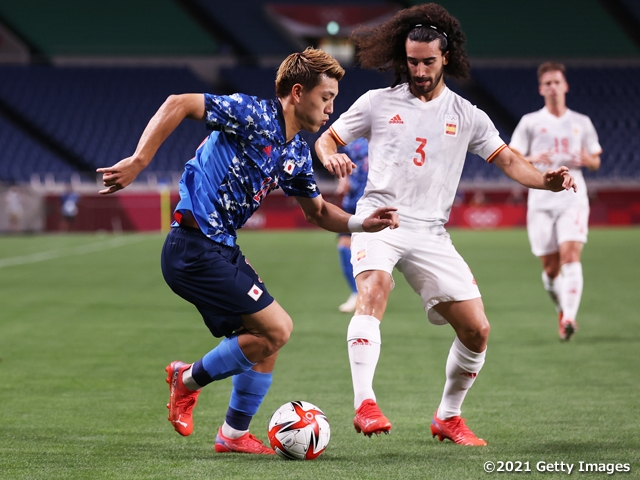