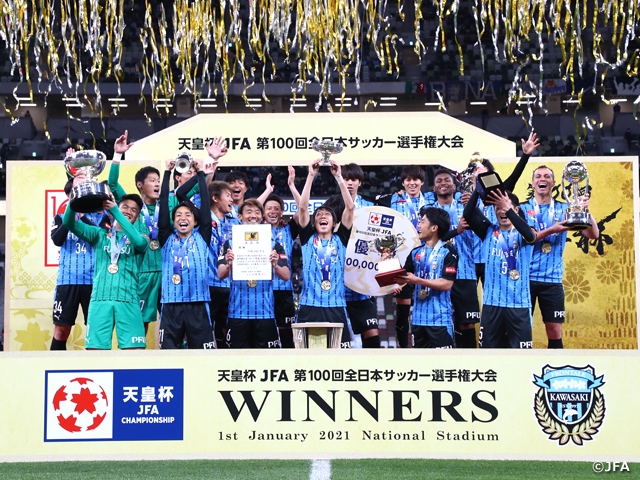 Although MITOMA Kaoru’s goal was the only goal scored in this match, Kawasaki showcased their signature attacking football style, which dominated the J.League this season. With the win, the Kawasaki side claimed their second title of the season for the first time in club history, as coach ONIKI Toru later reflected, “We were aiming for the second title. It was a tough road, but we did well.”

The J1 champion took control of the ball possession from the early minutes, as they repeatedly threatened the Gamba goal. Despite falling short from capturing the goal, Leandro DAMIAO and IENAGA Akihiro created numbers of chances, as the team recorded 12 shots in the first half.

Mitoma scored the deciding goal in the 55th minute when he received a through ball from Damiao. The 23 year old striker accelerated through the centre to break into the box and slotted the ball into the left corner, as he later reflected, “I was able to keep my composure in front of the goal.” 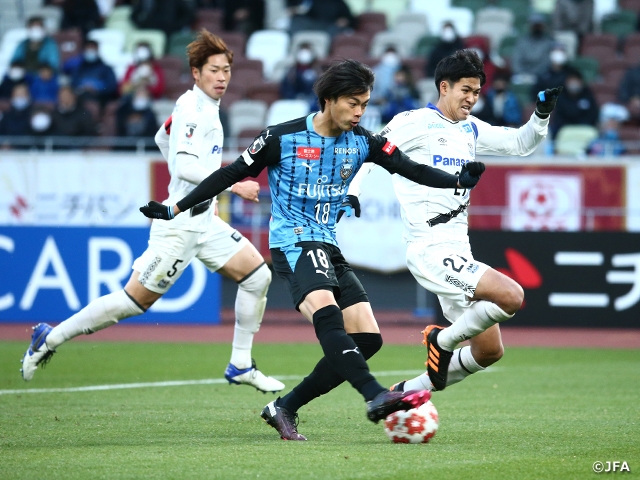 Following their 0-5 loss against Kawasaki at the league, Gamba entered this match with a three-back formation. With their GK HIGASHIGUCHI Masaaki making superb saves to keep them in contention, the Osaka side anticipated for their chances to score a goal but failed to find the net. After conceding the opener, they introduced their veteran striker WATANABE Kazuma and shifted their system to a four-back formation but ended up empty handed by the final whistle.

Kawasaki’s NAKAMURA Kengo, who was set to retire after this match, did not make an appearance in this match, but still managed to lift the Emperor's Cup with the club he spent his entire professional career with. The forty year old midfielder shared his thought after the match, “I am speechless. I must be the happiest football player on earth right now.” 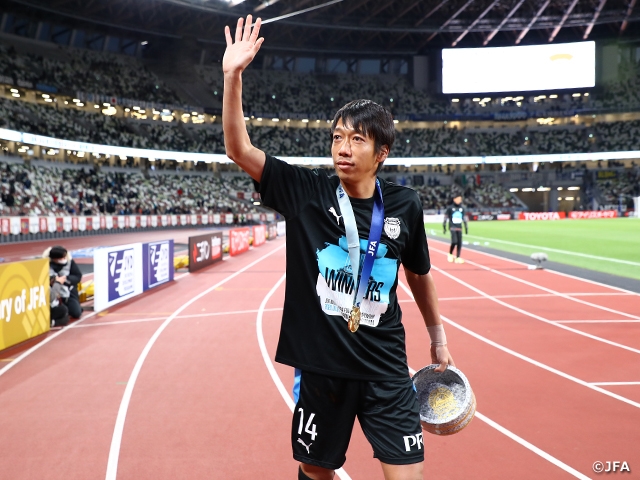 ONIKI Toru, Coach (Kawasaki Frontale)
We were thrilled to be playing at this wonderful stage of the Emperor's Cup final. Many of our supporters came to watch us, so we wanted to score more goals for them, but the match turned out to be a very tough match. Our players played with great patience to keep a clean sheet and showed great improvements at the individual level. Despite the hectic season caused by the pandemic, the players worked extremely hard this year.

MITOMA Kaoru (Kawasaki Frontale)
Despite playing at a huge stage, I focused on playing my usual game. I am truly happy that we were able to win the title, and I feel blessed to be able to contribute to the team’s victory. However, I think this match could have been a much easier match if we played it differently. By converting our chances in the first half, (Nakamura) Kengo-san could have made an appearance in this match. We saw plenty of room for improvements, so we hope to make the most of this experience to improve as a team.

MIYAMOTO Tsuneyasu, Coach (Gamba Osaka)
Today we entered the match with an emphasis on our defence, while incorporating two game plans. Our first plan was to make quick transitions to initiate our attacks, while our second plan was to possess the ball for a longer time to build our attacks. We were also anticipating on applying more numbers upfront when the opportunity present itself. However, we were being dominated by our opponent from the first half. We needed to possess the ball longer.

MIURA Genta (Gamba Osaka)
This was a very disappointing result. I have not won a title since joining Gamba Osaka, so I entered this match with a strong intention to win the title. Everybody worked extremely hard and we were so close to winning the title, so I feel very disappointed. I will not forget this bitterness and try to improve myself ahead of the next season. We must get stronger as a team and build a team that can win matches against teams like Frontale.